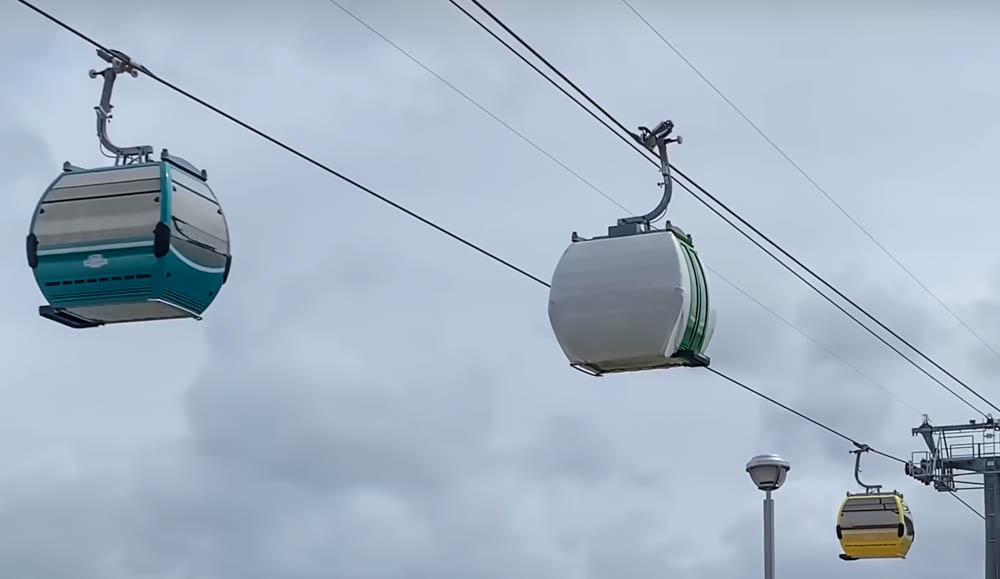 Walt Disney Company officials were on hand to today to give a few updates on the soon-to-debut gondola system coming to the Walt Disney World Resort. As reported by the Orlando Sentinel, testing of the currently-plastic-covered cars continued throughout the day while project leaders provided insight.

While the Disney Skyliner cars will operate at 11 mph, Disney VP Thomas Mazloum said that the trip would feel faster than that and provide riders with “fabulous views.”

Mazloum also addressed the common questions that have arisen about a Florida-based transportation system without air conditioning. According to the Sentinel, Mazloum stated, “We have specifically designed them with the Florida climate in mind,” and boasted that the vehicles are “absolutely comfortable.” The cabin windows are built to reflect the harsh Florida sunlight, while mesh screens are present to provide steady airflow.

An average ride on the Skyliner is about 15 minutes, with guests travelling between 15 and 60 feet in the air. The system will board and operate continuously, although additional time will be allotted for those who need extra help to board the vehicles.

While some cabins will be painted in one of eight single tone colors, many will be decorated with one of twenty-two special Disney character themes; their interiors house two wooden benches capable of seating up to 10 riders.

The passenger phase of the testing process is supposed to begin by August, with Walt Disney World cast members having the first opportunity to ride during the Skyliner’s trial run. Skyliner transportation depots are located at Epcot, Disney’s Hollywood Studios, Disney’s Caribbean Beach Resort, Disney’s Art of Animation and Pop Century Resorts, and the upcoming Riviera Resort.