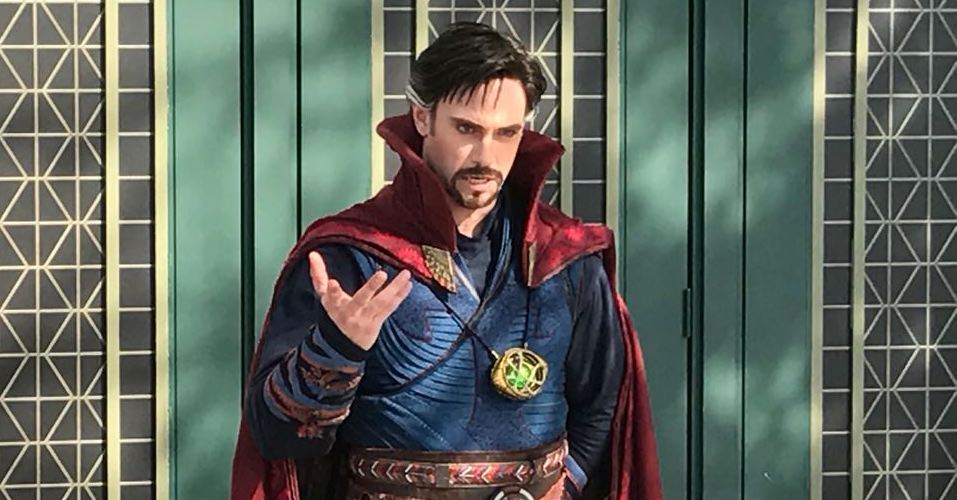 Now open for a limited engagement at Disney’s Hollywood Studios is a brand new show meet and greet (think Jedi Training Academy) with the main character in Marvel’s new entry into the Marvel Cinematic Universe – Doctor Strange. The meet and greet and show is taking place at an understandably unmarked location at the end of Pixar Place near the construction walls to Toy Story Land. There was no major announcement regarding this meet and greet show and unless you know what you’re looking for, you might have difficulty finding it (unless there are swarms of people watching). The key is to look for the Daily Bugle newspaper box that has the headline “STRANGE INCIDENTS IN THE CITY” and features a photo of Doctor Strange. On the side of the box, you’ll see a sign that reads “DISCOVER THE MYSTIC ARTS” and lists times for 10:30, 11:30, 1:00, 2:00, 3:00. The final clue is to find the Atlas Books building on Bleecker Street and then you found the meet and great. This is only the second time that Walt Disney World has had Marvel characters inside of their theme parks – the first being Star Lord and Gamora during the Villains Unleashed party at Disney’s Hollywood Studios. Both Guardians of the Galaxy and Doctor Strange previews were also shown at Disney’s Hollywood Studios, but without any Marvel branding. Disney put out a call for an actor to portray Doctor Strange for a limited engagement this fall back in September so this wasn’t really a surprise.

What will be surprising is if Universal responds to this in any way. By now everyone should know about the issues of Walt Disney World using Marvel characters in theme parks, because of the pre-existing contracts with Universal Orlando, but there is a gray area regarding characters from Doctor Strange and Guardians of the Galaxy, because they aren’t being used at Marvel Super Hero Island at Islands of Adventure, but they may be tied to other characters who are being used and brought into their “families” in future Marvel Cinematic Universe films. Regardless, if you are in Orlando and can get to Disney’s Hollywood Studios to meet Doctor Strange, I’d do it sooner than later.