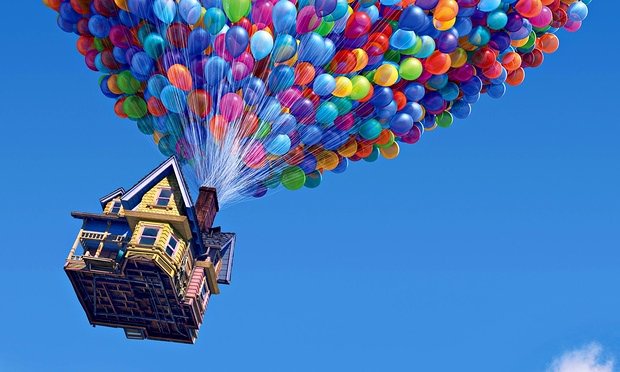 I want to start off by saying that I appreciate all the hard work and talent of Disney’s Imagineering team, as well as those contracted by Disney to bring their attractions to life. This was just a fun way to think outside the box on what Disney movies I personally would love to see integrated into the parks in a fun new way.

The 2009 animated Disney•Pixar film Up is somewhat integrated into Disney’s Animal Kingdom with the self-guided Wilderness Explorers experience. With that being said, I would love for Disney to give Up its own attraction. In the hypothetical attraction Carl Fredricksen (begrudgingly) and Russell (excitedly) would bring guests into Carl’s house right before it is about to take off into the sky with the use of the thousands of helium balloons that make Carl’s house fly in the film. This attraction would be a combination of Epcot’s Soarin’ attraction, and Disney’s Hollywood Studios’ Star Tours. As I imagine it, guests would sit on “chairs and sofas” in Carl’s home, and the windows and doors would open in order to give guests a view of their surroundings. 3) Just Around The River Bend with Pocahontas

The 1995 animated classic Pocahontas doesn’t have a very big presence in the Disney parks. It would be great for fans of the movie to ride an attraction based around the movie, and I couldn’t think of anything more appropriate than a “Just Around The River Bend” theme log flume attraction. Many will argue that Disney already has a log flume attraction in Splash Mountain. I love Splash Mountain, and personally I don’t see any problem with more of a good thing. With that being said, I would love to see Pocahontas and Meeko showing guests around the woods. Different scenes on the log flume could feature John Smith, Grandmother Willow, and the climax of the attraction could be that guests stumble upon Governor Ratcliffe, and have to escape down a waterfall. I think this would be a great attraction to incorporate into Disney’s Animal Kingdom. Mary Poppins is featured in The Great Movie Ride in Disney’s Hollywood Studios, but for such a beloved movie it is surprising Disney has never given this film its own attraction. Before I thought of a concept for this attraction I immediate knew it belonged in Epcot’s United Kingdom Pavilion. I really wanted to think of a flying umbrella themed attraction, but I couldn’t think of anything that would logistically work (this is why I’d never make it as an Imagineer). Next I learned of former Disney Imagineer Tony Baxter’s concept for a Mary Poppins themed attraction at Disneyland called “Mary Poppins Jolly Holiday.” D23 has an amazing video of Tony Baxter being interviewed where he describes the in’s and out’s of his planned attraction that would bring guests on a flying carousel through scenes from the movie like the horse race, the rooftops where guests could sing along with the chimney sweeps, and finally with guests being able to sing along to “Let’s Go Fly A Kite.” This was a brilliant attraction, and it deserves a place in a Disney Park. The United Kingdom Pavilion in Epcot would be the perfect home, and I really hope that Disney Imagineering will dust off Tony Baxter’s planned attraction in the future. Admittedly Lilo & Stitch was never my favorite Disney movie, but Hawaiian Roller Coaster Ride might be one of if not my favorite Disney song. In my opinion an actual family style roller coaster themed around this song would be an amazing addition to the Magic Kingdom’s Adventureland. I’ve spoken about this idea in articles in the past, and I’m only repeating this idea because it is something I would really love to see brought to life. I imagine this attraction being a family style coaster similar in intensity to Seven Dwarfs Mine Train. Because Stitch’s Great Escape is presumably closing any day now this attraction would allow the character to remain a part of the Magic Kingdom.

I’d love to hear about Disney movies you think the Disney Parks should incorporate into the parks! Let me know in the comments below, or on Facebook!