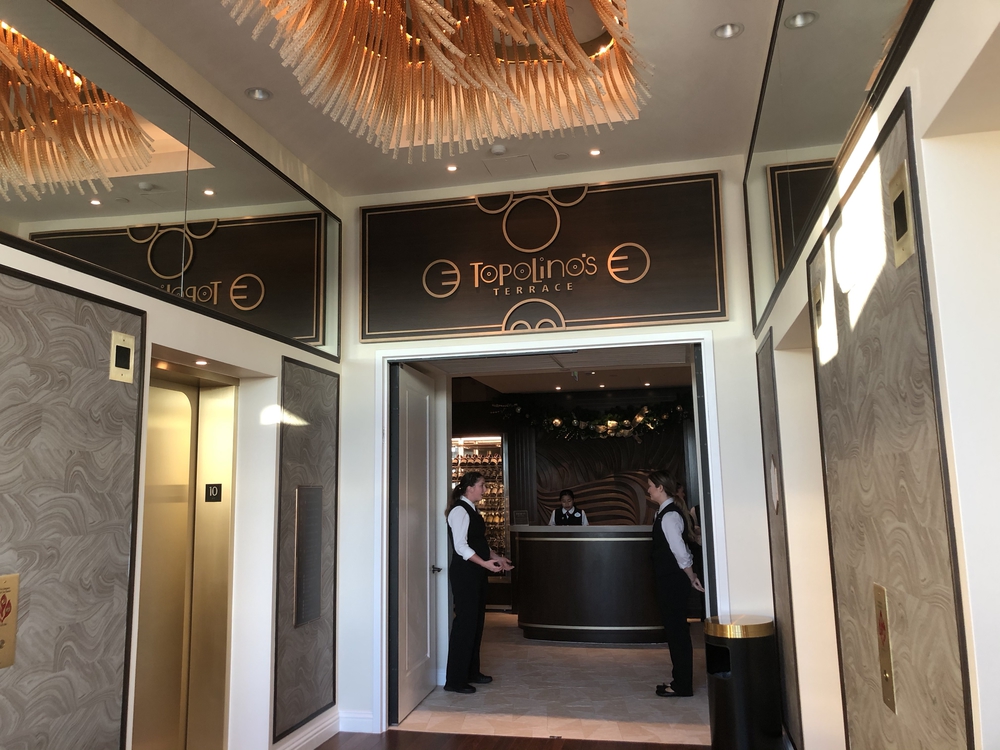 Topolino’s Terrace, named after Mickey Mouse (“baby mouse” in Italian), boasts sweeping panoramic views of Epcot, Disney’s Hollywood Studios, as well as two branches of the Disney Skyliner, and is the rooftop table service signature dining location at the brand-new Disney’s Riviera Resort. Corey Fiasconaro (Fiasco), Jackie Gailey, Morgan Limon, Sean Faulk, and I had the opportunity to dine at Topolino’s on their opening night.

As soon as guests exit the elevator for Topolino’s Terrace, they are greeted by a lovely light fixture affixed to the ceiling featuring tubes of golden-colored twisted glass, very similar to the glass tubes used in the stunning chandelier at Enchanted Rose at Disney’s Grand Floridian Resort and Spa.

A lounge is located just to the right as you enter Topolino’s Terrace.

This lounge area is quite spacious, and offers seating that can accommodate larger groups. The lounge area is clad in rich, dark woods, and the golden yellow color is borrowed from the lighting fixtures and is carried through onto the backs and seats of the chairs.

Guests do not need a reservation for the lounge, and both small bites and the full Topolino’s Terrace menu are available in the lounge,

The main dining room itself is open and warm, and features large windows offering spectacular views of the pool, courtyard area, and beyond. The space is grounded by the use of dark woods on the furniture and the ceiling, and, as elsewhere in the resort, brass accents are seen.

The dining room struck me as having a very similar vibe to that of Toledo at Gran Destino Tower at Disney’s Coronado Springs Resort.

The dishes here are inspired by the Italian and French flavors of the Riviera, and fresh seafood, pasta, and meat dishes are featured on the menu. The restaurant features a wood-burning grill, and an expo kitchen.

Our dinner on Topolino’s opening night began with French baguettes that had been snipped before baking so that they would resemble stalks of wheat. The bread was incredibly fresh and delicious, and proved to be a great vehicle for the two types of olive oil served with it.

One of our servers took the opportunity to explain the menu through the lens of an Italian family’s typical meal experience. Families in Italy sometimes begin their meals with a course of antipasto, and so did we. Our first antipasto choice was the Ricotta ($14), which our server had highly recommended. The ricotta is housemade, and was well received at the table. It was incredibly creamy, and was paired with a tomato jam that was sweet, with just a hint of heat.

Our second antipasto dish was the Burrata con Panna ($18). Burrata, a cow’s milk cheese, was paired with lavosh, black winter truffle, olive oil, and sea salt. The lavosh was light, and the generous sprinkling of sesame seeds added a rich flavor to the crisp. The burrata was creamy on the inside, and more of a solid on the outside. The taste was mild and light, and the sea salt added a bright note. Sea salt can do no wrong in my book, and I loved having it in this dish.

If anything that I say in this article helps you make decisions about a possible future visit to Topolino’s Terrace, please let it be this: get the House Fromage Board ($18). Please. For the love of all things fancy cheese, do it. Your server will wheel over a cart filled with five different cheeses, both soft and hard, made from cow, sheep, and goat’s milk. Our server did an amazing job of explaining the backstory, history, and preparation of each cheese and its accompanying element (accoutrements like honeycomb and gooseberries), and then plated them with great care.

The various cheeses were lovely, and we gobbled them down with great relish. Sean and I both enjoyed the pungent notes of the Roquefort. The Fromage Board is served with a small canning jar of housemade strawberry preserves. It’s light and sweet and delicious. Please note that the House Fromage Board is technically on the dessert menu at Topolino’s Terrace. In this instance, we did not regret our decision to jump ahead to dessert.

The next course for our French and Italian Riviera-inspired meal was the starter course. For my starter, I chose the Kale and Forelle Pear Salad ($16). The balsamic bianco vinaigrette was tart, and, when the flavors of the sweet figs, toasty quinoa, and crunchy almonds combined, I felt I just couldn’t get enough of this salad. I was so glad that I ordered it.

Jackie and Sean both ordered the Escargots en Coquilles ($17). This was the first time that Jackie had had escargots in the shell, and she thought that it was a neat experience. She enjoyed the garlicky, buttery taste, and thought the dish was delicious. Sean typically enjoys escargots when breaded a bit more than Topolino’s preparation, also noted that it tasted good. He mentioned that if someone isn’t used to this style of preparing escargot, the taste might be something that could possibly be too adventurous for them.

Fiasco chose the Olives Marinées ($9) as his starter. This dish is a plant-based option on the Topolino’s Terrace menu, but proved to be quite a lot of olives for one person. If you choose this dish, Fiasco commented that it would be best shared. He did enjoy the flavor combination of lemon, garlic, and salt in the olives.

Morgan had a side of mashed potatoes for her starter, and, while she said they were creamy (and better than Grandma’s…apologies to Grandma), she also noted that they could have benefitted from an additional flavor layering of either garlic or salt.

For my entrée, I chose the Rigatoni ($32). The dish was served crowned with gobs of Parmigiano-Reggiano, which I didn’t mind at all. The tender pasta was paired with chunks of braised chicken sugo and dandelion greens. The dish had a slightly nutty taste, and I liked the contrast of the bitterness of the greens, however, the chicken had tough bits throughout it. Unfortunately, biting into these tougher, chewier bits took away from my enjoyment of the dish. I would not order this dish again.

Fiasco chose the Filet Mignon ($54) for his entrée. He thoroughly enjoyed this dish, and now ranks this filet among his favorites on Walt Disney World property. The filet was incredibly tender, and it fell apart as he sliced into it. He loved the charred torpedo onion as well. The salt, olive oil, and onion combined to create one delicious dish.

For her entrée, Morgan chose the Bucatini. She found the dish to be quite spicy, and, even though it was spicy, she felt that the dish was not flavorful. It tasted good, but was not what she expected. Morgan enjoyed that the dish was light, but also filling. Overall, she felt it had more heat than flavor.

Jackie and Sean split two entrées: the Linguine Scampi ($36) and the Tomahawk Veal Chop ($52). Jackie noted that the Linguine Scampi is served with head-on shrimp, which could be a little difficult for those not expecting it. The flavor of the dish was very fishy, and just a bit too fishy for Jackie’s liking. Sean did note that it was weird to see head-on shrimp in this dish.

Jackie loved the potato-torpedo onion polenta gratin that accompanied the Tomahawk Veal Chop. The gratin had a lovely cheesiness and bite to it, and came in its own cast iron dish. She noted that everything was very fresh. Sean also mentioned that the potato-torpedo onion gratin was incredibly good. The dish was savored by both. Sean felt that dinner, when compared to the breakfast experience in Topolino’s Terrace that morning, was exceptionally better.

All in all, this was a lovely meal in an equally lovely setting. Keep in mind that, while it’s lovely, it is also expensive. Topolino’s Terrace is a signature dining location, and as such, will require two dining credits for guests on the Disney Dining Plan.

Our servers were simply delightful, and, if we hadn’t known that this was the restaurant’s opening night, we would have thought that our servers had been representing this establishment for years. They were truly exceptional. Depending on where your table is situated within the restaurant, you have the potential of viewing fireworks from Epcot, Disney’s Hollywood Studios, and, off in the distance, Magic Kingdom.