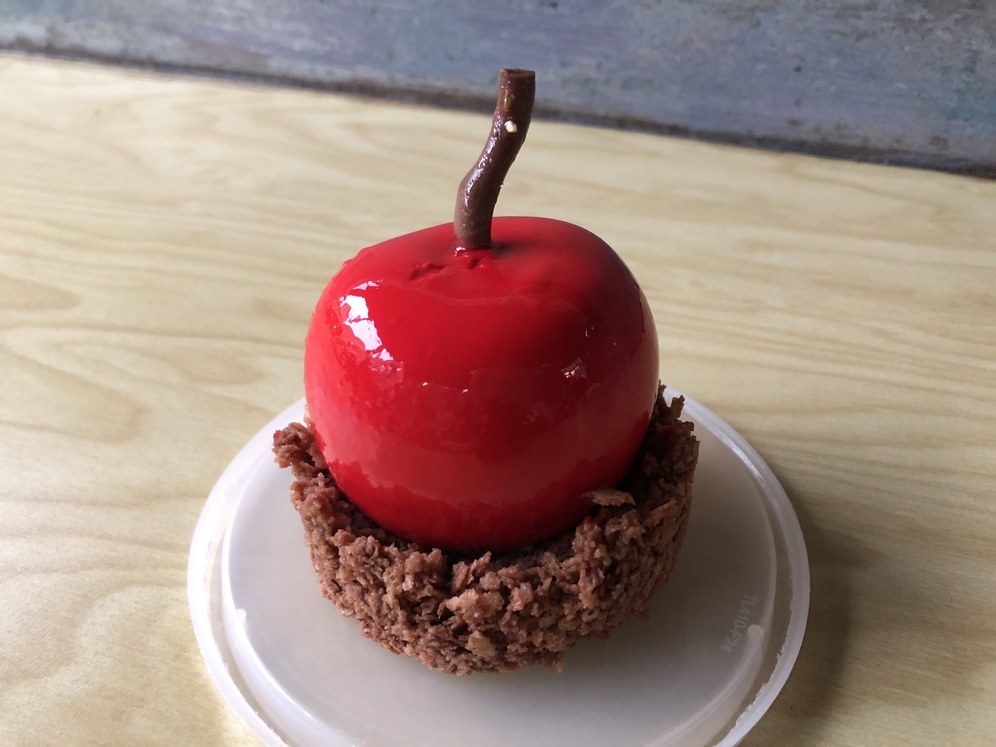 If you know me, you know that if there are special snacks to be had at Walt Disney World, I’m there. I’ll bring an appetite and an open mind to any limited time treat, so stopping by Disney’s Hollywood Studios to try a few of their Halloween snacks was high on my to-do list. Thankfully, this was an easy task to complete.

During a recent live stream from the Studios, Craig tried one of the four limited time fall season snacks currently being offered. Click here to watch the live stream and to get his thoughts on the Pumpkin Cheesecake Cannoli currently being served at PizzeRizzo.

Because Craig had already tried the cannoli, I opted to try the remaining three: the Poison Candied Apple, the Pumpkin Bread Tiramisu, and the Box of Bones Chocolate Eclair. Of course, with my impeccable timing, I showed up to the Studios just as a storm was rolling in. Sigh. So, for the rest of this article, picture me with a snack in one hand and an umbrella in the other, searching for a dry place to sit and munch on said snack. And picture me with soaking wet shoes. All for the love of Disney snacks, right? The squishy shoes would hopefully be worth it.

Naturally, I decided to try the first treat I came to: the Poison Candied Apple ($5.99) found at Trolley Car Café. The Poison Apple is pre-boxed and waiting for purchase in the refrigerated case.

The Poison Candied Apple is a dessert that is definitely lovely to look at. Similar to the seasonal apple dessert that was offered last year, this treat features a glossy glaçage exterior and a creamy mousse interior.

The Poison Candied Apple is also supposed to feature caramel mousse. I’m sure I looked a bit ridiculous as I sat there inspecting the treat looking for said caramel mousse. When I looked very closely at the cross-section of the dessert, I noticed that there was a faint, light brown color at the center of the snack. I did not detect a difference between the two flavors, but I appreciate the attention to detail in making the center of the treat look somewhat like the core of an apple. The base of the treat is described as being a "crunchy candy base." It could've been the Florida humidity, but the base wasn't really crunchy. It took on more of a somewhat sticky oatmeal/haystack consistency, if that makes sense. I liked it, but it didn't strike me as necessarily candy-like.

If you're taking the Poison Candied Apple out of the plastic box that it's served in, be warned: the red glaçage will stain your hands. I'd hate to think of what it might do to a white shirt, so be super careful or just eat it straight out of the box.

The next snack on my radar was the Box of Bones Chocolate Eclair ($5.49) found at Backlot Express. I opened the My Disney Experience app and ordered one of the treats found in the "Halloween Exclusives" category on Backlot Express' offerings page. After just a few minutes, I was sent the notification that my treat was ready.

The Box of Bones is an eclair made of chocolate choux pastry, dark chocolate mousse, and white chocolate "bones." The treat is kept in the refrigerated case, so it comes to you quite cold.

The choux pastry eclair was chewy and firm at the same time, and was quite good. The dark chocolate mousse was the standout. It was thick, creamy, and substantial. I'll take that mousse all day on its own. The white chocolate bones helped to make the dessert cute and photogenic, and provided an added layer of fun to the snack. I would definitely repurchase this snack.

My final Halloween snack of the afternoon came courtesy of Rosie's All-American on Sunset Boulevard. Let me just take a moment to say that I'm so thankful that I hand my umbrella with me when I was in the park. The trek from Backlot Express to Rosie's is clear across the park, and without my precious little flamingo-emblazoned umbrella, I would have been completely drenched. If you're headed to a park during summer or early fall, toss a little something to help with rain into your park bag. You'll be glad you did. Just my two-cents worth. Back to our regularly scheduled program.

Just a minute after placing my mobile order for the Pumpkin Tiramisu ($4.99), I received the notification that it was ready for pickup. Thankfully, there are plenty of umbrella-covered tables in the Sunset Ranch Market area near Rosie's, so I was able to find a dry spot from which to try the treat.

I approached trying the Pumpkin Tiramisu with images of pumpkin rolls dancing in my head. I had just seen a picture of a gorgeous, cream-filled pumpkin roll on social media, and I thought that this dessert would be akin to that. Unfortunately, it was not.

The spiced pumpkin bread used in place of the ladyfingers that you'd normally find in tiramisu was light on the spice and pumpkin flavor. I really wanted the pumpkin flavor to be of the in-your-face variety, but it wasn't. It was nearly undetectable. The mascarpone cream was fine, but, like the pumpkin bread/cake, it wasn't a standout. The dusting of unsweetened cocoa powder on the top of the treat provided a bitter contrast to the rest of the dessert, but the overall flavor of the treat left me disappointed. I would not repurchase this snack.

Out of the three treats that I tried, the Box of Bones Chocolate Eclair was the standout by far. The snack's interesting texture and amazing, thick dark chocolate mousse filling made for a memorable and enjoyable snack. And, thankfully, Backlot Express has both seating inside and plenty of covered seating outside. If you're savoring the treat in the middle of a monsoon, you're covered. Literally.

One of the biggest happy dances of the afternoon came from an extra step that I took before I left for the park: I grabbed 3 plastic food containers and tossed them into my backpack. Ryno and I recently talked about our park bags on The Best and Worst of Walt Disney World, and I explained that I had recently found myself schlepping half a cupcake around the Magic Kingdom in two of those cardboard food boats that Disney food is often served in. Not fun.

I knew that I wouldn't be able to finish everything on the spot at the Studios, and so I knew that the reusable plastic containers would come in handy. And they did indeed. In fact, as I was writing about it just now, I went to the fridge and took another bite of the Pumpkin Tiramisu to ensure that I hadn't missed something. To-go containers for the win!

If you missed it, click here to read about my adventures as I tried three of the Magic Kingdom's Halloween snacks. And, if you missed Tom's article describing all of the sweet treats being offered this season, click here to check out the complete list.

Have you tried any of the Halloween treats currently being offered in the Walt Disney World parks? What treats are you looking forward to trying? Happy snacking, everyone!