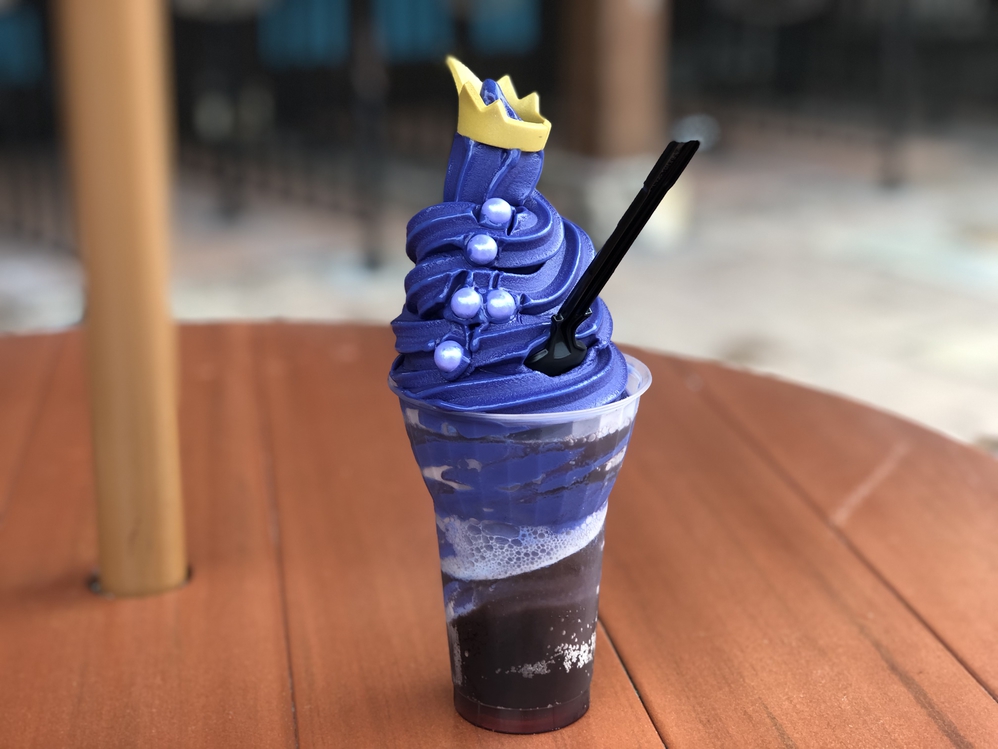 Well, thanks to the ever-unfolding can-o-worms that 2020 seems to be, Magic Kingdom’s transition into fall will actually take place pretty close to the technical start of well, fall. That’s a silver lining in my book, and while the fall bunting and Mickey pumpkin wreaths aren’t scheduled to appear up and down Main Street, U.S.A. until next week, some of the Halloween treats have begun arriving in the Magic Kingdom’s quick service and snack locations. Sampling a few of those snacks to help you know what’s what is totally a mission I can get behind.

It’s with my deep and abiding love for snacks and the fall season that I made my way to the Magic Kingdom yesterday to sample some of the autumnal goodies. I tried three of the seasonal treats, and I’ll share my very favorite with you when everything’s said and done.

The first treat I had was the Not So Poison Apple Cupcake. If you follow Walt Disney World snacks at all, I know you’re probably wondering why in the world I hadn’t tried this one before. This cupcake made its way onto the Magic Kingdom fall season snack scene two years ago. Forgive me for being late to the party, but I’m here now and I’m not going anywhere. This cupcake is just that good.

This cupcake is officially described as “a spiced apple cupcake with pecan crunch buttercream themed after a poison apple.” I tried my level best to get that cupcake out of its wrapper to show y’all a proper cross section, but the liner/wrapper was the kind that wouldn’t tear away easily. After a slight wrestling match, I gave up and simply dug in. Friends, this was delicious. The spice cake is studded with chunks of pecans, but not overly so (nuts in baked goods aren’t typically my thing), and the cake itself is moist and flavorful.

And if icing is your thing, you’re in luck. You’ll sit there at your table or on a bench or hovered over a trash can savoring every bite of that icing because this cupcake has icing for days. The shiny red rock candy that adorns the cupcake is yummy, too, even though it may stick to your molars just a bit. That’s what good rock candy does, right?

This cupcake is huge, and as such, is completely shareable. Bring a friend or maybe bring a piece of Tupperware so you can savor the rest later. This isn’t a snack that you’re going to be okay throwing away if you don’t finish it. The sweetness of the icing is tempered perfectly by the spice cake and the savory pecans. You’ll find the Not So Poison Apple Cupcake ($6.99) at Pinocchio Village Haus in Fantasyland, and you can order it using the mobile order function in the My Disney Experience app under the location’s “Halloween Exclusives” heading.

After zipping around the park hunting down information about the available Halloween popcorn buckets and sharing pics and info on The DIS’ social channels, I knew it was time for another seasonal snack. While there are several to choose from, including ones I knew right off the bat that I’d enjoy, I went for one that I was a bit unsure about. It was new on the Disney Halloween snack scene, and I needed to give it its fair shake.

We’ll begin with the promotional signage for the Poor Unfortunate Souls Float. The float in the promo picture looks interesting and refreshing.

The float that you’re served is definitely interesting and refreshing, but it’s also very different from the treat seen on the sign. I was a-okay with that, but I feel it’s good to point out so that you’re not surprised when what is given to you looks quite different from what you’d thought it’d be.

The deep blueish-purple, slightly iridescent cream cheese soft-serve ice cream completely surprised me. It was good, and it adopted some of the black raspberry flavoring to create a rich, unique combination. You might think that cream cheese ice cream would be heavy and overpowering, but it wasn’t. The Coca-Cola in the float mixed with the back raspberry syrup to create a drink that I’d like offered all on its own. Who doesn’t love a flavored Coke? The thick syrup gave the soda a rich sweetness that wooed me immediately.

The float is served adorned with sugar pearls and a fondant crown. If you’re like me, you always eat something that’s made out of fondant in the hopes that it will, for once, taste sweet and delicious. Alas, no. The float’s crown isn’t sweet, but it does make for a pretty sweet decoration to snap a picture of, so it’s all good in my book.

This is another extremely shareable snack. At $6.99, in my opinion, you definitely get your money’s worth. Guests can find this at Fantasyland’s Storybook Treats. You’ll wait in a physically-distanced line for this one since Storybook Treats isn’t available for mobile ordering. Be sure to ask for a straw to get down to that yummy Coke as the float’s only served with a spoon.

The final snack of the afternoon came hot on the heels of the Poor Unfortunate Souls Float. The park was closing in 20 minutes, and there wasn’t a moment to lose. Thankfully, my hubby joined me in time to help me eat both the second and third snacks, so I had a teenie bit of stomach room left for the day’s finale. The last snack of the day debuted as a party-exclusive snack last year: Constance’s For Better or For Worse Wedding Cake ($6.29).

I waited in a lengthy line during last year’s Halloween party for this snack, and I wanted to be able to compare this year’s version to the original, so off to Liberty Square Market I went. Thankfully, last year’s party-exclusive treat line was nowhere to be found when I arrived to the market. To be fair, the line was just up the way at Sleepy Hollow Refreshments as guests queued up to purchase Madame Leota’s popular sipper cup.

Upon receiving the snack, I scurried over to Haunted Mansion for a little photo session. You just have to take a pic of Constance’s wedding cake in front of her attraction, after all. I was so concerned that the whole thing would start melting that I didn’t even notice that I took pics of the treat with the back of the chocolate axe showing instead of the front. Ahem. My apologies. Picture a grayish color on the top of the axe for the full effect.

The reason that I was concerned that the cake might melt is that it’s not completely made of cake as one might assume. The treat is described as “citrus cake with raspberry Bavarian cream, whipped cream flowers, and a chocolate axe.” While the cake, as you can see above, does involve some cake, is also covered in the Bavarian cream and coated with glaçage. Glaçage is more of a glossy glaze rather than a whipped icing or a stiff fondant, and it tends to get warm and melty quickly. Especially in September. In Florida.

The treat is kept in a refrigerated case and is a nice, cool contrast to the heat of the Magic Kingdom. The biggest change that I detected in this year’s version of the snack is the shift from the cake being “citrus-scented,” as it was last year, to simply “citrus,” as it is this year. That change in recipe alone made this year’s version more enjoyable. The bright notes of the citrus cake made that portion the standout of the treat. The Bavarian cream and the glaçage are okay. All in all, while this snack is great for a photo op, it lacked in flavor when compared to the other two snacks that I had enjoyed that afternoon.

I did, however, enjoy getting to sit in the new and expanded seating area just behind Liberty Square Market. The area is quite large, and keeping physically distanced from other guests was easy. As we’ve seen at other dining locations, certain tables are marked as not for use in order to keep dining parties 6 or more feet apart.

So, which snack was the winner in my book? Which treat offered the most value for the money that was spent? Which one would I repurchase?

The Not So Poison Apple Cupcake is the winner, hands down. The artistry used (it’s definitely a work of art) is top notch. All elements of the cupcake work in harmony to create a snack like none other, and if you’re going to be in the Magic Kingdom this fall, I would tell you to walk quickly (no running in the parks, you know) and order one for yourself. And, if you do give the cupcake a try (or if you’ve tried it in the past), please jump into the comments below and let me know. If you’ve tried one of the other fall season snacks, please let me know that, too. I always have room on my snack list for another treat.

If you’d like to check out the full list of this year’s Walt Disney World Halloween treats, be sure to click here to check out Tom’s article. Happy snacking!