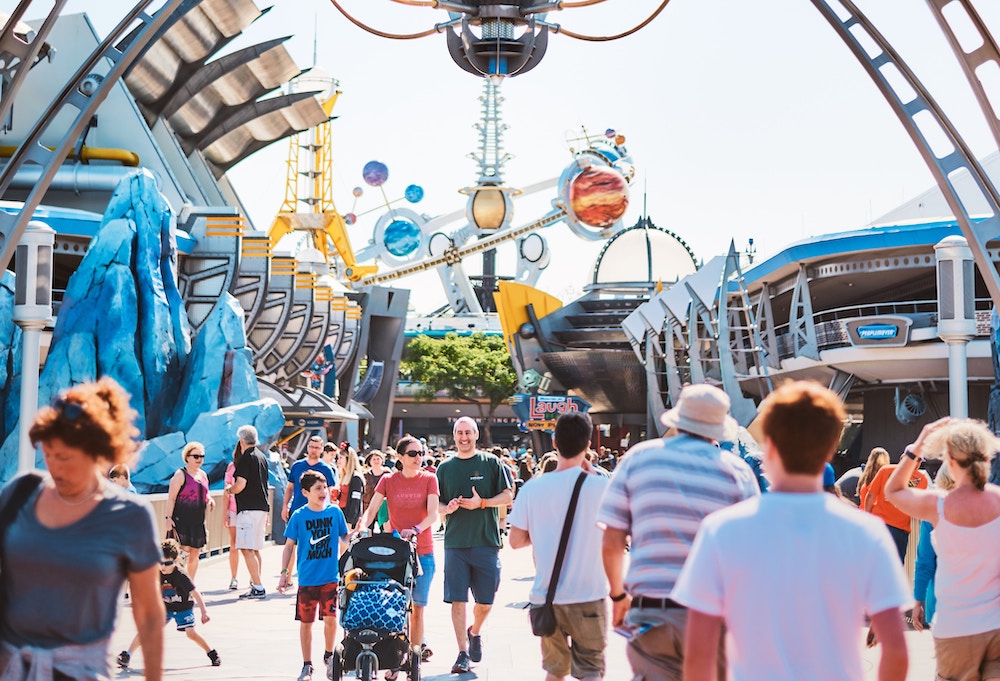 Welcome friends. It is that special time of year when we reflect on some of the unusual personalities we have come across in the parks and curb our frustrations with a little light-hearted humor. You guessed it; it’s time for the next round of 5 people you don’t want to be in the Disney theme parks.

But first, the usual catch up. For those of you who have not joined us previously for this spirited recap of some of the baffling behaviors that can be witnessed in Disney theme parks, you may like to have a quick click through the previous editions of this series. Click HERE for Part One to learn more about Backpack Guy, the Makeout Couple, Captain Obvious, The Blasé Bubble Parents, and the Height Requirement Cheaters. Part Two can be found HERE, where you can meet The Flasher, Chatty Cathy, The Blocker Family, The Mind My Spot Crew, and Children of the Shoulder. Part Three can be located HERE, featuring The Self-Appointed Historian of Disney Inaccuracy, the Woo-Girls, Mrs. This-Whole-Curb-Side-Is-Taken, The FastPass Waiters, and The Swear Bears.

It’s now time to take the plunge into a few more of the strange behaviors that have come to my attention during my magical Disney days. A quick warning: this list is not for the faint-hearted. If you are likely to take things unrealistically personally or unable to see the humor in a few satirical observations, then you may prefer to skip to the next article. Let’s begin.

Have you ever been shuffling along a crowded Main Street, U.S.A, another family’s stroller a comfortable ten feet in front of you, only to be repeatedly smacked in the face with the balloon trailing along behind them? It’s tied to the side of the stroller and lingering steadily behind so no one in the group can see the slightly-deflated helium ball bouncing around the heads and torsos of those walking behind much like a pinball in a Disney-themed crowd machine.

Have you ever tried to watch the fireworks with your view blocked by a series of giant Mickey heads floating high above their owners?

This one almost didn’t make the list. However, during my last trip to Disneyland, I noticed there were a few families with a single child and an entire collection of balloons. At first, it looked pretty cute, and I am sure would have made for a few lovely photos, but, later on, once the wind had kicked up a little, every land seemed to have at least one family with flying Mickey missiles shooting around them. These balloon collectors didn’t have a care in the world. They did not attempt to shorten the strings to lessen the exclusion zone of doom around them and certainly didn’t apologize when they had knowingly face-planted someone within eyesight.

The balloon collectors might look cute, but some are armed with helium and not afraid to turn a blind eye to use it!

There are times when a select handful of ECV users can feel like the resident biker gang of Disney theme parks. In the worst of scenarios, they may even come at you in a line, crushing the toes of those nearby, ramming at ankles and occupying the entire walkways side-by-side with an entitled grudge to hold. They wear you down with a move-out-of-my-way-or-die stare, reminiscent of a scene from the post-apocalyptic movie series Mad Max. You are about to pay for all the perceived injustices they have ever experienced, one twisted ankle at a time.

Now you can’t just be using an ECV to join the crew, no, no, no. There is a specific criterion you need to adhere to before you can be initiated into this group. Have you ever apologized for hitting someone with your ECV? Then you are out of the running. Have you ever waited patiently in a line for your turn instead of ramming people out of the way? Get outta here; you are not ECV gang material. Have you ever managed to injure someone discreetly, but intentionally, on your way through a crowd? No? Why did you even apply? You are out of the club!

Shield your children, lift your strollers and guard your shins, the ECV bandits are on the loose!

You asked for it, and here it is. Finally, it is time to address those special people who insist on filming the entire fireworks show or ride experience with an iPad.

The iPad Paparazzi are watching their life experiences through the eye of their devices as if it were the augmented reality demonstration at Apple Park. With their arms lurched upward with full limb extension to film a show, ride or fireworks, they show no regard for those behind them who are blocked entirely from viewing the experience.

I’d like to include a special shoutout to those that have their screen brightness swiped all the way to the max at night, making sure that those behind you are blinded by your screen instead of the enjoyment of their own experience. Extra paparazzi points are awarded if the flash goes off so you can take a good photo as well.

While traveling, there are times when we all get stuck with rubbish we wish we could get rid of; sometimes trash cans might even be inconveniently located few and far between. But, as decent human beings, we carry our rubbish with us, on the lookout for the next opportunity to discard that empty can or food rubbish responsibly. So when we are in a place like Disney that takes such pride in the appearance of the grounds and provides trash bins so readily that you couldn’t throw a churro without hitting one, it makes me a little crazy to see park guests letting their trash fall to the ground without a care in the world.

Before the hater band-wagon leaves the station, I am not referring to a child that perhaps drops something accidentally or a parent that doesn’t notice a napkin or two blowing from the stroller. Littering Larrys are the grown couple walking down Main Street purposefully allowing their empty food wrapper to fall to the ground because someone else will pick it up. If confronted, they may even offer some jovial excuse in jest like ‘by littering I am keeping a custodian in a job.’

Once in a line at Magic Kingdom, we were just around the bend from a handful of mid-teens and their adult chaperone when one of the boys threw an empty water bottle into the decorative bush that ran alongside the queuing area. A girl that was in the group reported the boy to the woman who was with them, telling on him with all of the spiteful enjoyment that can only be mustered by a sibling. Much to our disappointment, instead of being told to fish it out and put it in the bin like a normal person, the woman looked at the litter in the garden before turning back to the girl with an irritated reply of, “So?” Care factor, zero.

As my iPhone would auto-correct for me, what the duck is wrong with you? And no, I’m not actually talking about ducks.

What used to be something you only heard about through the grapevine is now becoming a far too common trend. Taking out your frustrations on the nearest unsuspecting cast member is starting to gain momentum as the latest coping technique of emotionally unstable park-goers. The behavior is so troubling that I am struggling to think of a witty nickname for this person you don’t want to be.

Reports are frequently arising about guests losing their cool over circumstances out of anyone’s control and subjecting the closest Disney employee to their wrath of verbal, and sometimes physical, abuse. The most recent story I have heard at the time this was written was the one about the disgruntled group of North American tourists who didn’t have FastPasses for Tower of Terror. A 23-year-old woman from Chicago started pressing buttons on the cast member’s console before punching her in the face. It seems she wasn’t having a magical Disney day.

The reality of most frustrating situations is that the person standing in front of you delivering the bad news rarely has any control over anything that has happened, or is about to happen. So when you see an adult channeling their inner 3-year-old and yelling at cast member, give their victim a commiserative smile, so they are reminded that there are some normal people in that park that day, too.

How you treat the people around you can say a lot about your character; even when pushed to your limit by rude wait staff or extenuating circumstances, you still have a choice to be respectful. Take a breath and remember, even if you are trying to get a free FastPass or two out of a bad situation, being a decent human is usually a better way to get more assistance.

Remember, just because you once held a balloon, know someone with an ECV, own an iPad, accidentally dropped something or once became frustrated with another person, doesn’t mean any of these things are written about you. Just be chill and enjoy these for what they are: a light-hearted, paradoxical look at some of the park behaviors that might otherwise get you down.

There are responsible balloon owners out there. And, while it is everyone’s right to be able to own a balloon in the USA, not everyone is capable of doing the right thing with it. Balloons don’t annoy people, people with balloons annoy people.

Most of the people in scooters or Electric Convenience Vehicles are incredibly courteous and responsible when navigating their way through the parks. Some of you will choose not to read the part where I clearly express that this one applies to a minority of ECV users, however, you do you.

Do I have anything against iPads? No, in fact, although I don’t think I will ever understand the allure of bringing a tablet to a theme park, my family is quite fond of our own when at home.

That is going to wrap it up for this edition of the next 5 people you don’t want to be in Disney Parks.

Include your additions below!