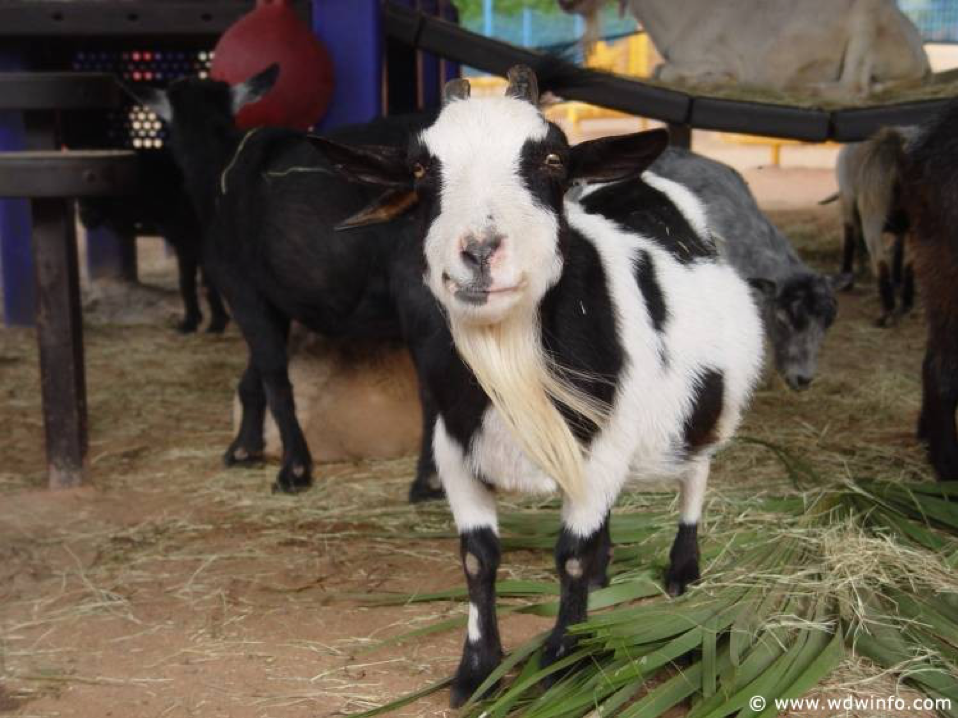 Animal Kingdom’s Africa includes beloved experiences such as Kilimanjaro Safaris and Festival of the Lion King, centered around the village of Harambe. Adjacent to the bustling town is the station for the Wildlife Express Train, which transports guests to Rafiki’s Planet Watch. This complex attracts a sizable number of visitors and hosts several sections.

However, the Affection Section stands out to me as a place I would consider a must-do stop for every guest visiting Walt Disney World’s Animal Kingdom. This area, quite visible as one approaches the main building to the left, includes animals which guests can pet and interact with. The Affection Section features sheep and goats who can come and go from roped off areas but also come out and intermingle with guests as they see fit. Those two species tend to dominate the Affection Section and are especially friendly. Other animals in the area vary in visibility, but include llamas, donkeys and cows. I have seen friendly cows willing to be pet, and the llamas and donkeys are generally kept from petting distance.

One resident I have not seen for a while are Kunekune pigs, a rare and especially cute species of pig who debuted in the area in late 2011. A small breed of pig, the Kunekune pig is a rare domestic breed whose conservation is crucial to supporting diverse ecosystems. While all animals are valuable, these species are noted for their ability to live in a variety of climates, amenability to being trained and domesticated, and a lack of desire to roam.

The sheep and goats are available to pet, and guests can see them eating and at play. While not the most exotic of species, it provides the opportunity to physically touch and really appreciate other creatures in a safe environment. Possibly an experience to be dismissed as simply a petting zoo, the Affection Section compliments the experience of seeing warthogs on Kilimanjaro Safaris, or a Komodo Dragon on the Maharajah Jungle Trek. You can see these residents of the park, however it would not be safe to interact with them openly. (I am pictured below petting an especially friendly goat!)

The Affection Section is a must-do attraction for all guests visiting Animal Kingdom. Providing a worthwhile experience, Rafiki’s Planet Watch and specifically the Affection Section tips the scales in allowing Animal Kingdom to become a full-day experience. Hearing the gibbons in Asia and seeing the flamingos in front of the Tree of Life is complimented by touching and talking to the sheep and goats in this area of the park. Not only is this important for young children being introduced to the natural world, but for adults like myself who may begin to lose touch with the outdoors.

Rafiki’s Planet Watch is worth visiting on its own merits. The Wildlife Express allows guests to see backstage areas where animals are housed, and on occasion baby animals not yet integrated into the park. For example, baby rhinoceros can sometimes be seen in their enclosures from the train. Inside of the main building, known as the Conservation Station, one can see various invertebrates, tools used to provide veterinary care, and more. But the opportunity to see and touch animals up close really rounds out the experience of visiting Animal Kingdom.

Rafiki’s Planet Watch is generally open 30 minutes after park opening and tends to close well before park closing, however hours can vary widely. When visiting the Affection Section, guests are required to wash their hands prior to leaving the area. Have you been to Rafiki’s Planet Watch recently? Do you feel it is worthwhile to visit? Have you seen the Kunekune pigs in recent years? Please feel free to leave a comment!