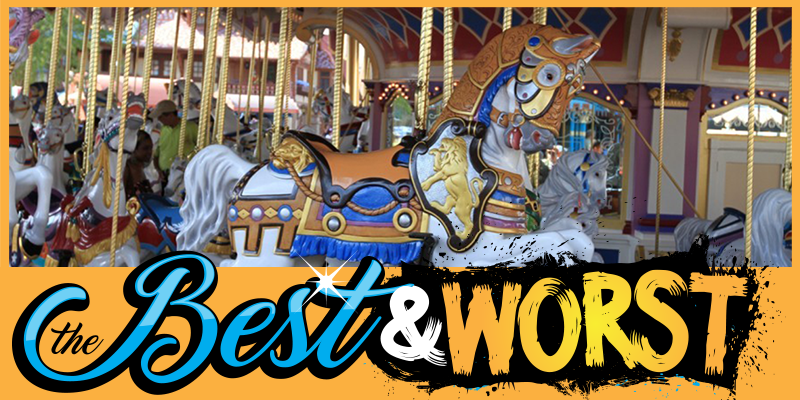 Earlier this year Pete Werner, Charles Boda, Sean Faulk, and I discussed the eight best attractions at Walt Disney World with short wait times. Our list remains true, but I wanted to return to this topic because there are a handful of attractions that were left off the list that I think are just as deserving.

If you missed watching our video discussion in January I’ve attached that video. We go into full detail about each attraction, and why we think they are some of the best with short wait times. I’ve also listed the eight previously discussed attractions below if you’ve already watched the video, and just need a quick reminder of what they were. Looking back, I am surprised we didn’t have the Prince Charming Regal Carrousel on our list in January. While it might not be the most technically impressive attraction I consider it is a must-do when visiting the Magic Kingdom during your vacation. Typically, you’ll wait ten minutes or less for this ride. There is just something incredibly special about riding around the carrousel with views of Cinderella Castle, and the rest of Fantasyland.

I hadn’t ridden the Prince Charming Regal Carrousel for years because I had it written off as a ride meant for families with small children, but when I was dragged on by a few friends a couple of years ago I was reminded of how fun this ride really was. Riding the Prince Charming Regal Carrousel reminds you of what being a kid is like. Isn’t that what Disney vacations are all about?

This ride has a fascinating history. Did you know that it is technically it the oldest attraction at Walt Disney World? Prince Charming Regal Carrousel was built in 1917 and was originally named The Liberty Carousel. The Liberty Carousel was located at Belle Isle Park in Detroit, Michigan. It later was moved to Olympic Park in Irvington, New Jersey, before it was purchased by Disney in 1967. The wait time for the Hall of Presidents can be up to a 25-minutes, but that is simply because 25 minutes is the length of the show. Outside of the attraction, there is a 25-minute countdown clock. I suggest looking at that clock if there is ten minutes or less, go inside and wait, and if it is any longer than that, take a break, grab a snack, or look inside the Ye Olde Christmas Shoppe, which across from The Hall of Presidents.

I am a geek about politics, so naturally, I love The Hall of Presidents, but even if American history and the American Presidents aren’t of interest to you this show is still worth watching. Seeing 44 audio-animatronics on stage together is amazing. The Seas with Nemo & Friends

This ride does rely heavily on the use of screens and projections, which isn’t typically my favorite design for a theme park ride, but the screens are integrated extremely well. Near the end of the ride Nemo, Marlin, and Dory are even projected into the real aquarium housed in the pavilion. It looks like they are swimming around with the real fish! The very first time I saw this I had no idea how it was done. The American Adventure is a 30-minute presentation on the history of America. The audio-animatronic technology that is used heavily to keep the story going is now over 35 years old, and still remarkably impressive. Check out a times guide for when the show is playing that day, and then show up slightly before it is supposed to start and you won’t wait long, or at all.

If you do arrive a little early you might even have the chance to listen to the Voices of Liberty, an eight member a cappella group, which will help the time pass by in the rotunda. It’s Tough to Be a Bug

Underneath the iconic Tree of Life is the It’s Tough to Be a Bug 4D show based on the Disney•Pixar film A Bug’s Life. The wait for this show is normally pretty short. If it is any longer than 15 minutes I’d suggest coming back later in the day. The wait times are typically shorter than 10 minutes in the morning, peak a little after 12 p.m., and then shorten again around 3 or 4 p.m.

Once inside the theater, guests feel as if they have been shrunk down to the size of a bug. When everyone is seated Flik introduces himself, and then the show begins. The interactive elements are fun and are really what makes it special, but I will warn families with young children might have a hard time as these elements can be scary for kids.