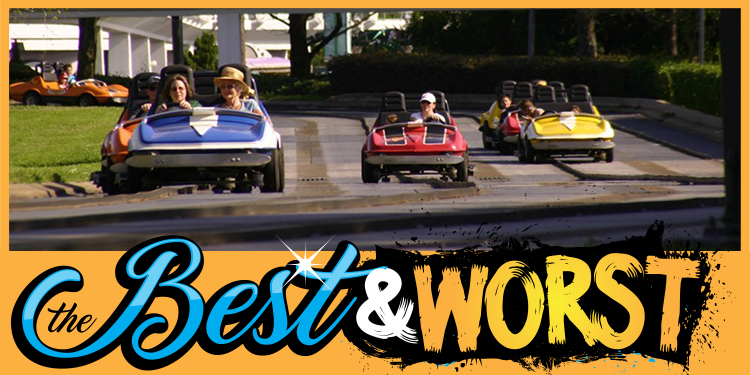 In March of 2016, we launched the very first episode of the Best & Worst of Walt Disney World. At that time, we had no idea that this show would take off like wildfire, which is something we are so grateful for here at The DIS.

We were so excited that the audience enjoyed watching these segments because we love making them. As the popularity of the show continues to grow we have thought of new ways to give our audience more Best & Worst content. Early this year Tyler Crouch started hosting the Best & Worst of Disneyland, and now we are planning on another exciting new project.

To start off these new series of articles I figured I’d go back to where it all started. The very first pilot episode, which was titled “Worst Attractions at Disney World,” lists just that. Looking back, Pete Werner’s and my lists are a bit outdated. Between each of our five picks, ten between the both of us, 4 (and a half) have since closed. The half point being Stitch’s Great Escape, which has become a seasonal attraction, which everyone in the Disney Parks community knows means it is only a matter of time.

So, if we take The Great Movie Ride, Flights of Wonder, Universe of Energy, Circle of Life – An Environmental Fable, and Stitch’s Great Escape out of contention, and we revisit this topic, what would a new list look like? And for the sake of this discussion, I’m going to expand that list to what I think are currently the worst 10 attractions. I love the Muppets. Their comedy brilliantly plays the wide variety of personalities that each Muppet has. Their comedy is over the top and silly, but is grounded in having a depth that not many children’s programs have. Muppet*Vision 3D in Disney’s Hollywood Studios understood half of this equation. They play up the silly nature of the Muppets, but that is all that is there. The main setback in this show is Waldo C. Graphic, a computer-generated Muppet that I despise. Waldo’s “humor” is best summarized as an animated version of an annoyingly creepy clown. His weird laugh is like nails on a chalkboard, and his presence totally distracts from my enjoyment of the rest of the Muppets. It is also important to note that the 3D technology is outdated at this point, as the show opened on May 16, 1991. I totally understand the appeal of The Barnstormer, but I am just frustrated with its execution. The sole purpose of The Barnstormer is to be a kid’s first roller coaster. It is a great way to test the waters and to get their confidence up. That being said, the lazy re-theming in 2012 to keep this attraction in New Fantasyland’s Storybook Circus makes no sense. Apparently, this attraction is supposed to be part of The Great Goofini’s circus performance, but the only real theming to tell you that is the giant billboard that you crash “through,” besides that this attraction really has no theming. I know it is short, but that is no excuse. What makes Disney attractions special is their immersive theming, and The Great Goofini’s Barnstormer barely has any. I was going to put Mission: SPACE much lower on this list, but I will say that the new Green Team (the less intense version of this attraction) is enjoyable if you don’t mind small confined spaces. As for the Orange Team (more intense version), forget it. While I’ve ridden the more intense version numerous times, but I’ve noticed there is like a 25% chance that I’m going to feel sick for the rest of the day. Those odds simply aren’t worth it for me. I love the idea of an attraction being themed around Imagination. That fits perfectly into the ideals of The Walt Disney Company, but the latest iteration of this ride lacks the creative spirit that an attraction like this should have. Figment, the mascot of the Journey into Imagination, has never been my personal favorite, but that isn’t my main gripe. The problem is that the latest iteration feels cheap. When you compare the current version of this attraction to its predecessor, you’ll see how they’ve stripped most of the amazing details that made the experience so great. Without these incredible details, the ride lacks the imagination and creativity that is supposed to be the basis of the attraction. The current iteration also relies heavily on video screens, which I’ve always found disappointing for something that should be so innovative. 6) Beauty and the Beast Live on Stage

Disney’s Hollywood Studios is going through a lot of changes, but one thing that needs change more than almost anything else is the Beauty and the Beast Live on Stage show. The show opened on November 22, 1991, and honestly, I was shocked to find out the show was updated in March of 2001 because the production value and style still screams the early 90s to me. Beauty and the Beast is an all-time classic Disney movie, and I honestly think with some set changes, costume updates, and some other minor changes this could go from being on my worst list to be up there with one of my favorite shows. Tom Sawyer Island has been a playground for good old fashion fun since it opened on May 20, 1973. Unfortunately, most families rarely take the time to head over there anymore. Some seem to have forgotten it even exists. While I like the premise of Tom Sawyer Island, Disney needs to do something to bring it new life to attract more guests. Space in the Magic Kingdom has limited real estate, and if something is not surviving the test of time then it is time to move on to make space for something else. There is a lot they could do to attract guests back over to the island, and I’m certainly not arguing that it needs to be bulldozed, rather I hope Disney would give Imagineers — much smarter than me — an allocated budget to re-energize the island. For one, they could start with re-opening Aunt Polly’s Dockside Inn, which served snacks, beverages, and ice cream! I know I’m going to get some heat for having this opinion because it’s a staple of the Magic Kingdom, but I’m just calling it how I see it. When the Disney community first started to speculate that the Magic Kingdom would be getting a TRON Lightcycle Power Run attraction, many had assumed that this would be the end of the Tomorrowland Speedway. I, for one, was happy that the atrociously fumy attraction would finally be shut down. We later found out with the official announcement of the TRON Lightcycle Power Run attraction at the D23 Expo that the Tomorrowland Speedway would not be demolished to make room for the new attraction. I, myself was kind of disappointed. If they aren’t going to shut this ride down it needs to be reimagined. The cars need to be replaced by electric vehicles; not only will they fit in with the futuristic theming of Tomorrowland, but it will also improve the gross fumes that give guests headaches. 3) The Magic Carpets of Aladdin The problem I had with the Swiss Family Robinson Treehouse two years ago is still the problem I have with it today. The “attraction” is essentially a queue to nowhere. This walkthrough is a great way to get exercise, due to the walking up and down numerous staircases, but as a theme park attraction, there is a lot left to be desired. The Swiss Family Robinson film from 1960 isn’t something many children have seen in 2018, so this experience needs to be interactive and engaging to get younger guests interested because they could care less about the movie. Now that Stitch’s Great Escape is a seasonal attraction and Universe of Energy has been closed completely, the baton of worst attraction at Walt Disney World has been handed off to Primeval Whirl. The ride is located in DinoLand U.S.A., which is largely filled with off-the-rack, poorly-themed attractions, which the exception of Dinosaur. The crowning jewel in the lazy theming of DinoLand U.S.A. is Primeval Whirl. This ride never fails in giving me a headache in the way it whips you around corners. Some will make the case that the theming works because it’s supposed to be part of a street side carnival, but I take that as a lame excuse. If the theming is something that Walt Disney himself despised and never wanted his theme parks to be compared to, then you’ve got yourself a bad theme.