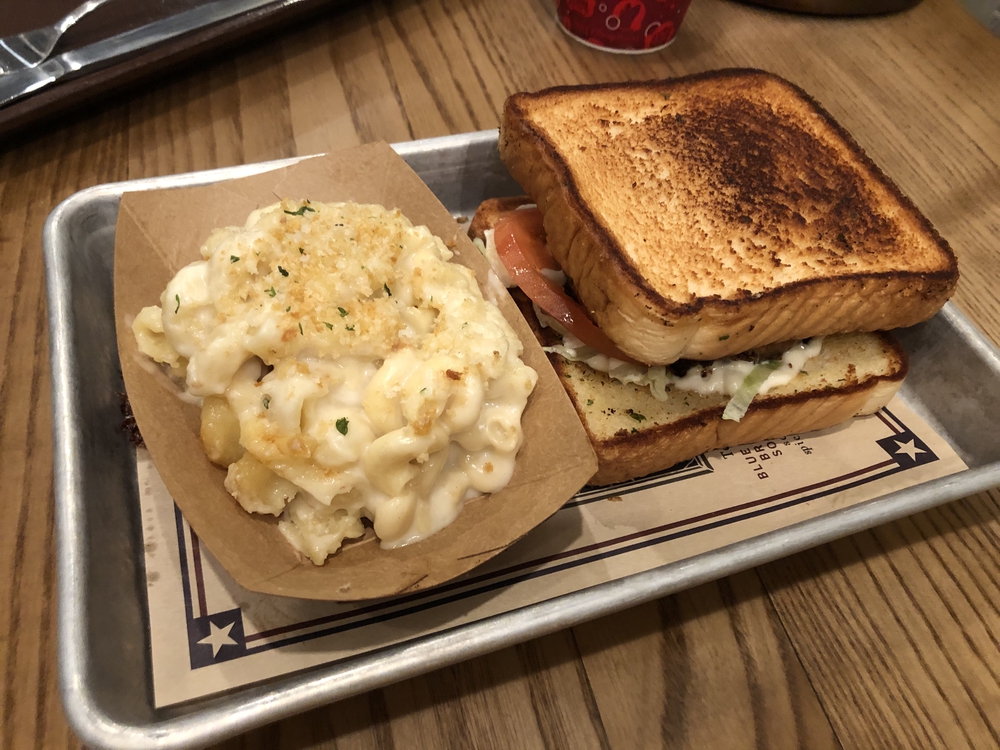 On March 4th, I had the opportunity to enjoy several new experiences at Walt Disney World: I savored the sights and flavors of opening day of the Flower and Garden Festival, I rode Mickey and Minnie’s Runaway Railway, and I ate at the recently opened Regal Eagle Smokehouse: Craft Drafts & Barbecue for the first time. Based off of my experience at the Smokehouse that evening, it won’t be my last time swinging by for a bite.

Okay, so I know that what I ate that day at Regal Eagle was technically an entrée (as opposed to a snack), but go with me here. If you were splitting it with a friend or two, it could be a snack, right? Ahem…

Craig and Ryno did an excellent job of covering Regal Eagle Smokehouse, located in Epcot’s American Adventure pavilion, on its opening day for the Disney Dining Show. If you haven’t watched their review video, you’ll find it at the end of this article.

For their review, Craig and Ryno tried a sampling of dishes from across the menu at Regal Eagle Smokehouse, except for the plant-based option. That’s where I come in. My mission was clear: give the BBQ Jackfruit Burger a try, and share my thoughts for those who adhere to a plant-based diet. Can do!

Regal Eagle was hopping the night that I stopped by, and it was fun to see the renovations that had been made to the dining room. Festive bunting festoons the ceiling, and Muppet memorabilia covers the walls.

The walls are decorated with the ribbons and accolades garnered by Sam Eagle and his BBQ-loving friends.

Several years ago, Smokejumpers Grill in Disney California Adventure debuted a jackfruit burger that received favorable reviews. I hoped that this iteration would as well. The BBQ Jackfruit Burger ($12.99) at Smokehouse features a Beyond burger patty on top of a mound of shredded jackfruit, along with shredded lettuce, vegan mayo and a slice of tomato. The burger is served on toasted vegan garlic bread.

If you’re someone who is accustomed to eating Beyond burgers, you know going into this dish that the consistency of these burgers is not exactly the same as a meat-based burger. That being said, it makes a really good try at coming close. The barbecue jackfruit was really good, and, as someone who loves barbecue, was really close to the taste of shredded pork.

The vegan mayo used on the burger struck me as more of a garlic aioli, and I’d place money on it being the same mayo as the one used on the plant-based burger at Beaches & Cream Soda Shop. It adds a nice layer of flavor to the dish. The vegan garlic bread that the burger is served on is delicious, and stood up to the weight of what was placed on it.

Speaking of additional layers of flavor, Regal Eagle Smokehouse features several barbecue sauces that guests can choose from. The varieties offered include both tomato-based and vinegar-based options.

The BBQ Jackfruit Burger comes with a choice of sides, and I chose the decidedly not vegan Macaroni & Cheese. The mac and cheese was incredibly good, and is sure to be a hit with guests. The corkscrew pasta was perfectly cooked, and the use of toasted bread crumbs was a home run. The cheese sauce was creamy and rich, and didn’t have the off-putting fake- cheese taste that some macaroni and cheese sides on WDW property often have. Maybe it’s just me, but I often find myself steering away from mac and cheese at Walt Disney World, but I won’t at Regal Eagle. It’s incredibly good.

So, what about you? Have you tried Regal Eagle Smokehouse’s BBQ Jackfruit Burger? What you would you recommend to others at this new dining location? Will the Smokehouse be on your must-do list when Walt Disney World reopens? Let me know in the comments section below. Thanks!

If you haven’t watched Craig and Ryno’s review of Regal Eagle Smokehouse, just click below: