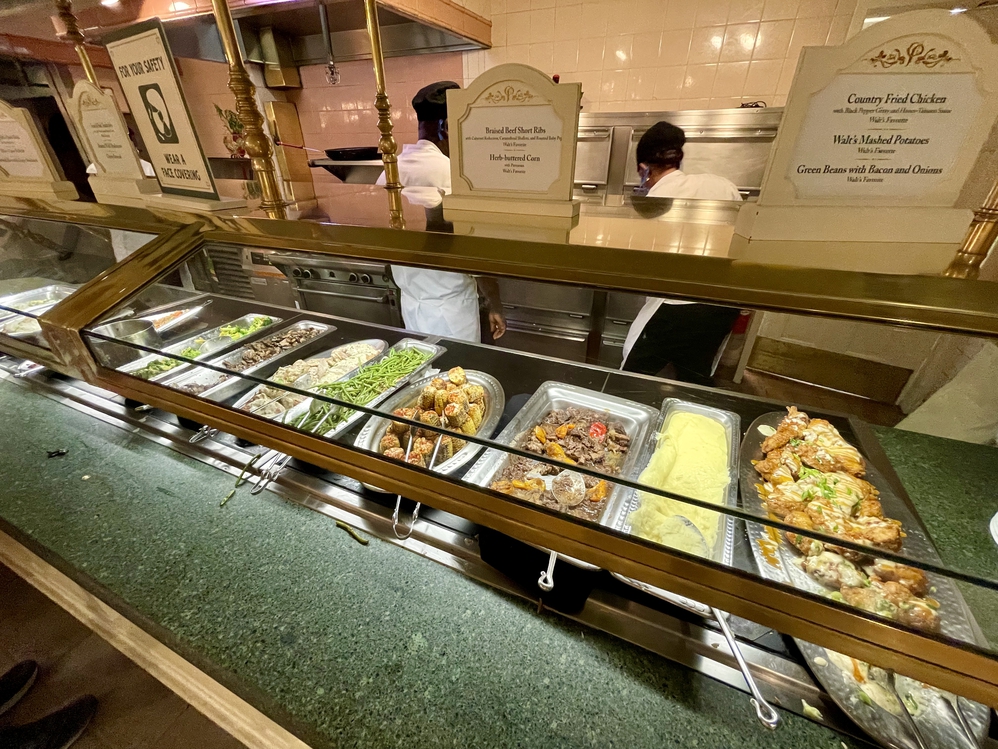 I’m a sucker for all things Walt Disney. Slap his name on it, and I’m a happy camper. Share a bit of history regarding the man, and I’m in. Tell me that I’m eating some of his favorite foods? Well, now you’ve just gone and done it. You’ve appealed to both my love of food and my love of Walt. In honor of Walt Disney World’s 50th Anniversary, Magic Kingdom’s Crystal Palace did just that. And I loved just about every single bite.

I hadn’t eaten at The Crystal Palace in years; in fact, my little ones were actually little ones last I dined there. If you’re in the same boat, the first thing to bring you up to speed on is that Winnie the Pooh and his band of friends aren’t currently appearing at the restaurant. Also, buffets are back in Walt Disney World. Guests at The Crystal Palace serve themselves at the buffet, and a sharp eye is kept on cleanliness by the cast members. Right now, the price per adult is $39 and $23 for children 3-9, plus tax and gratuity. Let that sink in for just a moment. Thirty-nine dollars. For all of the food that you care to eat, your non-alcoholic beverages, and your desserts. This, when compared to other Walt Disney World dining prices, seems like a pretty good deal.

When you approach the buffet, you’ll see that dishes inspired by Walt are labeled as such. Walt’s favorites can be found among the appetizers, the entrées, the desserts, and even on the kids’ buffet (Walt loved Mac and Cheese…how cute is that?!).

The food? So good. Walt’s favorites were so much fun to try, and the dishes that weren’t labeled as such were equally as good. Everything was hot and fresh, and I could tell that it had been prepared with care. The culinary team was constantly swapping in new platters filled with food and tending to what was on the buffet.

Like prime rib? There was an attended carving station at the end of the entrée section of the buffet.

Among the “Walt’s Favorite” entrée and side dish selections, I have to recommend that you not miss the Country Fried Chicken with Black Pepper Gravy and Honey-Tabasco Sauce. Holy cow, that chicken is amazing.

Another dish not to be missed is Seared Pork Tenderloin with Light Stone Ground Mustard Cream. That tenderloin was incredibly, well, tender. It was so moist, and that mustard cream sauce? So good. Please also try Walt ‘s Favorite “Canned Peas,” which are really anything but canned peas. It’s a risotto dish (another thing that I’m a sucker for) made with English Peas, Pea puree, and Pea Tendril Salad. And Walt’s Favorite Braised Beef Short Ribs with Cabernet Reduction, Caramelized Shallots, and Roasted Baby Peppers? So tender, so richly flavorful, and just fell right apart. Yum.

Another highlight as a Walt history buff? The Green Beans with Bacon and Onions. As Eat Like Walt author Marcy Carriker Smothers pointed out on her Instagram account a couple of weeks ago, this is the dish known as Fou Fou Style Green Beans. Fou Fou was the Disney family’s beloved cook and friend, and as Marcy points out in her book, “While Walt wasn’t a big fan of vegetables, this was a family favorite. Fou Fou used only the freshest of ingredients, so please, no canned or frozen beans.” If you’re interested, you can find the recipe in Eat Like Walt, which, by the way, is an incredible book.

Where the train left the track for me (sorry, Walt, I know that you liked trains) was when it came to the dessert buffet. If you enjoy soft serve ice cream, there’s a machine waiting for you. What disappointed me in particular was the taste of the dessert offerings themselves. Walt’s Favorite Apple Cobbler was okay, but the fresh-baked cookies just did not taste good, which is a shame because Biergarten‘s little unassuming chocolate chip cookies are stuff-them-in-your-pockets worthy.

The other two desserts in the “Walt’s Favorite” category, the French Silk Cupcake and the Butterscotch Pudding, were skippable, although I did like the creative use of caramel popcorn sprinkled on top of the little cups of butterscotch pudding. The S’mores Tarts, unfortunately, were in the same “meh” category.

As I mentioned earlier, sodas, tea, coffee, and the like are included in the price of the buffet, so by all means, have that after-dinner cup of coffee and sit and enjoy a bit of history in the middle of the Magic Kingdom. And have another piece of that fried chicken.

The service was fantastic. This place? If you’re looking for a lovely setting in which to fill up on great food during a big park day and not pay upwards of $60 or more, this is the place. And the fact that you actually get to eat like Walt while you’re there? That’s just icing on the cake.