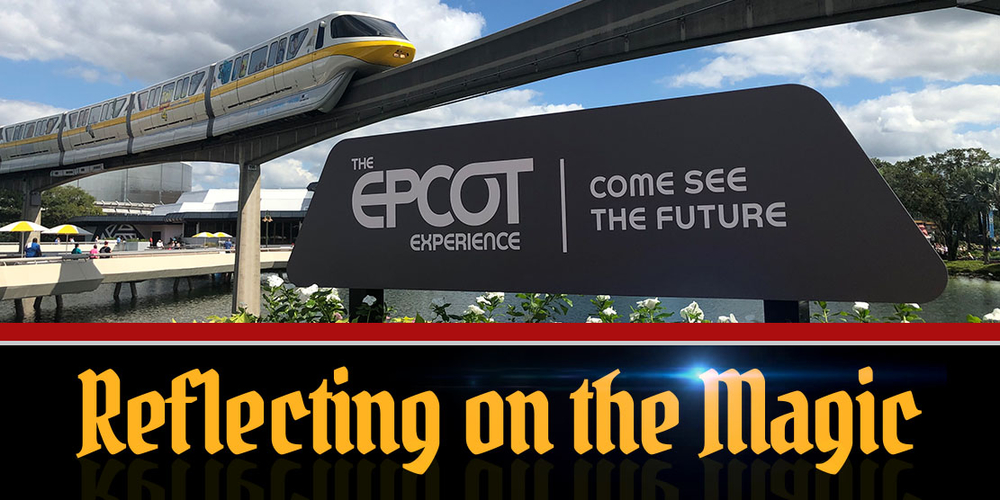 The Epcot Experience opened last fall in The Odyssey to help guests more fully embrace and understand the changes that are coming to Epcot. If you’ve had the opportunity to visit the exhibit, you know that the centerpiece of the experience is a 12 minute film, along with a 3D mockup of the park, that surrounds guests with the sights and sounds that the Disney Imagineers have planned for the months ahead.

Just in case your WDW vacation was canceled or postponed, and stopping by the Odyssey was on your must-do list, I thought it might be fun to virtually stop by the Epcot Experience today. After all, we need ALL THE THINGS that keep our eyes on the prize and that bring us joy right about now, don’t we? Here we go!

First of all, let me say that I love that The Odyssey is being used. I always enjoy getting to be in the building (which, back in the day used to be a restaurant), and the renovations that they’ve done recently have freshened up both the interior and exterior without subtracting any of its unique charm.

Snacks, drinks and light-fare nibbles are available at the counters as you walk into the building. The open center area of the space has been enclosed to create a circular room for guests to step inside and be completely immersed in the experience. Inside the room, the 360 degree video plays on a loop, and guests come and go throughout it.

As you step into the circular room, you’ll immediately notice the large, round multi-leveled display of Epcot. Spaceship Earth is the highest point in the display. Using projection mapping throughout the 12 minute film, the park display changes as certain areas of the park become the focus.

The film begins with a short clip of Walt Disney introducing his idea for Epcot, and a narrator begins to lay out the idea of a constantly evolving park. Artist renderings of the renovated Future World are then revealed on the screens using dynamic colors.

The new Journey of Water attraction is highlighted next, and the voice of Moana’s grandmother reminds us that “water is alive and ready to play.” The display in the center of the room transforms as rivers appear to rush over the surface.

The Play pavilion, coming to the former Wonders of Life pavilion in what is now Future World East, is the next upcoming park addition to be introduced. The narrator describes the new pavilion as a “digital city,” and as “a place to play and create.” The center display is covered in brightly colored, pixelated blocks before being covered by Disney character emojis.

The scene then transitions to introduce what the narrator describes as “our first intergalactic pavilion.” A citizen of Xandar, a planet from the Guardians of the Galaxy and Marvel films, begins to speak, and the silhouette of Rocket Raccoon is seen interrupting the Xandarian’s video explaining a new partnership between Earth (Terra) and Xandar.

Rocket plugs in Star Lord’s Walkman, and “Give Up the Funk” begins to play. It’s a fun and lighthearted way of introducing the upcoming Guardians of the Galaxy: Cosmic Rewind rollercoaster without really giving any details. As a big Rocket Raccoon fan, I was okay with the lack of new information. Just give me Rocket and loud music, and I’m fine.

The next attraction to be highlighted is Spaceship Earth. The narrator begins the introduction into the reimagining of Spaceship Earth by saying that “Epcot’s transformation will include some big changes…”. Upward-floating lanterns fill the screens. After a bright light bursts onto the screens, the faces of global citizens appear.

As was previously announced, Spaceship Earth will see the addition of a “story light” that sounds like it will guide guests along their journey throughout the attraction. The bright light on the screens in the Epcot Experience moves and flows throughout the elements, and the scene ends with the byline of “Our Shared Story.”

The film now steps into World Showcase as the new attraction and film, Wondrous China, is introduced. The film will celebrate both the ancient and modern culture of China.

The scene changes, and we are told that “everyone’s favorite little chef” is whipping up one of his specialties for us. Chef Gusteau addresses those watching, and then Remy is heard trying to decide which dish to prepare for us.

We are suddenly rat-sized and scurrying around the kitchen of Gusteau’s Restaurant in Paris. Remy’s Ratatouille Adventure is slated to open this summer in the France pavilion.

Our last World Showcase pavilion to visit during the film is the United Kingdom. A clock face appears on Spaceship Earth in the center of the room, and the narrator tells us that “a practically perfect adventure is coming.”

As if appearing out of a fog, Cherry Tree Lane is then revealed around the room. Speaking as a Mary Poppins fan, this was a breath-taking moment. The scene is simply lovely, and kites, blossoms, and even Mary Poppins herself, float across the screens.

The 12 minute film ends with a bang as we are introduced to the new nighttime spectacular, “Harmonious.” Smaller fireworks are shown as launching from spots located in World Showcase Lagoon, and movie characters and scenes are projected on screens placed throughout the lagoon as well.

The narrator concludes by saying, “EPCOT: where the magic of possibility awaits,” and the new Epcot logo appears on the screen.

Of course, it remains to be seen how vast the impact that the temporary closures of the parks will have on the changes coming to Epcot. Whatever the future holds for the park, I feel that the Imagineers did a tremendous job of catching guests’ imaginations and presenting a hope-filled future for the park.

Have you had the chance to visit the Epcot Experience? If so, what did you think? Is there an addition that’s coming to the park that you’re most excited about? Please share in the comments section below.