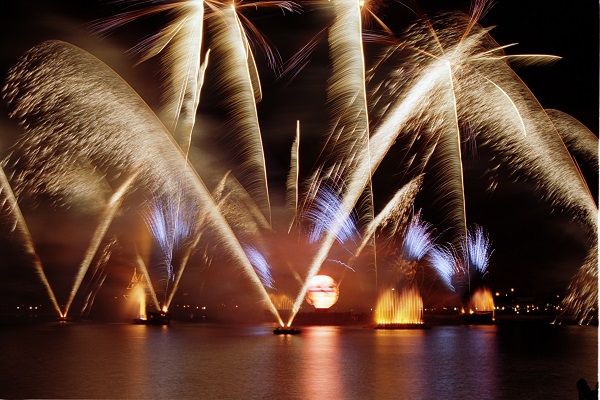 With a loud screech and then a shooting star exploding over World Showcase lagoon, IllumiNations: Reflections of Earth at the Epcot theme park takes guests on an emotional journey as it honors the spirit of humanity, as well as celebrating the world’s “millennium” with a look at the past, present, and future of Earth.

As one of Walt Disney World’s most beloved shows, IllumiNations: Reflections of Earth, will end its iconic 20-year run on September 30, 2019. It is currently the third-longest continuously running nighttime show, right after the Electrical Water Pageant (1971) and Fantasmic! (1998) and it’s the fourth longest-running show in Walt Disney World history.

A number of people were involved in creating this soon-to-be missed spectacular including Don Dorsey, the show’s creator and director, Gavin Greenaway, the music composer, and Ron Logan, executive vice president of Walt Disney Entertainment.

One of the many projects that Ron oversaw was IllumiNations: Reflections of Earth. In a previous interview with WDWInfo, Don Dorsey discussed his involvement with the show. “From the very beginning, Don Dorsey has been the entertainment show ‘father’ of that lagoon,” said Logan.

“Many of the show pieces were built in Disney’s central shops,” said Logan. “That globe, which is a ‘monster’, has all kinds of technology that I certainly don’t understand.” When Logan asked the team if it all would work, Don Dorsey (show director) and John Haupt (technical director) told him it will work; it will be fine and Logan said okay.

The Genesis of the Lagoon Show

In 1982, Logan came to work full time at the Walt Disney World Resort around the same time that Disney was working on a show for the Epcot lagoon. “Bob Jani and Don Dorsey were involved in the show,” said Logan. “The show was called Carnival de Lumiere or Carnival of Lights. I went to a tech rehearsal of the show on Castaic Lake, which is in northwestern Los Angeles County.” When Logan saw it he said he had his doubts. “It was basically giant projector slides. No videos, no nothing. Just slides,” said Logan. “The problem we had with that was when it would get humid [in Florida], which is like every night, those slides would stick. Bob [Jani] decided to stage the show in a semi-circle with five barges on the lagoon. He made a creative mistake, in my opinion. If you duplicate – people compare and find mistakes. Bob decided to continue with the concept even though he didn’t have a lot of time to work on it as he was getting ready to leave and move to New York City to run Radio City Music Hall.”

Classical music was chosen for the show because it was considered “the appropriate music” for Epcot. Logan said that musical concept for Epcot never changed until later on. In the beginning, synthesized music was used. Through the years the music stayed the same, but was also preserved with a recorded orchestra track.

“The challenge with the lagoon was that it was so big,” said Logan. “But it was the only place where we could accommodate a lot of people to see a spectacular.”

“Carnival de Lumiere was a disaster,” said Logan. “In addition to the slides sticking there were some creative story concepts that the Ops guys didn’t like.

After a few months, the show was replaced with A New World Fantasy. The show had the same equipment configuration as Carnival de Lumiere but introduced a new storyline, as well as the use of Pichel lights. Next up was Laserphonic Fantasy.

“We had to create our own laser bulbs,” said Logan. “Since the lagoon was so big, typical lasers could not throw an adequate beam. We had to go to the industry and have them hand make all of the green and red lasers. Those were the only colors available in those days. There is also a rule that we had to notify the FAA about the use of lasers in the show. Additionally, we found out that if you bounce a laser off a piece of glass the laser is no longer lethal, but if it directly hits someone’s eye – they could be blinded. So we were very careful about that.”

At that time, the laser industry was so young that the laser bulbs that were unreliable. Sometimes they would last three hours and sometimes they’d last three months. “You never knew,” said Logan. “We shot the lasers from the Mexico, United Kingdom, and Italy pavilions. Also, FAA regulations required us to lock the laser projection rooms during the show’s operation for safety reasons.”

After Laserphonic Fantasy came IllumiNations. “IllumiNations was the first lagoon show where we lit up the outside of all the pavilions,” said Logan. “It was a major step forward. Although we didn’t have a control system to control the lights from one pavilion to the next, we had to hire people to throw a circuit switch on and off in each pavilion according to the timing of the script and music. The size of the entire show was tough, but in a way it was good because you could accommodate a lot of people around the lagoon during the show.”

IllumiNations really worked well and our audience was pleased with the show. We had a “globe”, we had lasers, and fireworks. “We also used lasers in the globe that would light up fiber optics,” said Logan. “We had 30,000 pieces of plastic protruding from the globe, but we didn’t know until after we cut the plastic that we cut them at the wrong angle. We couldn’t fix it because there were 30,000 pieces.” Every once in a while, Logan would fly over the lagoon to look at the globe. Because of that error during the cutting process, he said the globe was always brighter looking down from the sky than it ever was from the audience’s perspective.

The Birth of IllumiNations: Reflections of Earth

Although Don Dorsey was thinking of ideas for different types of shows for the Millennium back in 1994, Michael Eisner didn’t decide on a show until 1999. “Eisner contacted us and said ‘I want you to do a show for the Millennium,” said Logan. “He gave us $20 million.’ The Ops people didn’t have to pay for it. It was sort of like a gift for the world.”

A 30-person, Disney company-wide millennium committee was formed. “We met every two or three weeks to discuss various ideas. I was a part of that committee,” said Logan. “We [the Live Entertainment division] were the only group that could produce a show in time for the millennium. If Walt Disney Imagineering was involved it would typically take a year or two to develop. The upside was us ending up in control of these projects. We could do it quickly and we produced most of it out of the shops at Walt Disney World – which helped too.”

When the millennium came along, Epcot was the number four park in attendance at Walt Disney World. “There was very little for kids,” said Logan. “They [kids] didn’t like going there and there were no thrill rides except for Test Track. However, most of the kids couldn’t get on that attraction because they were not tall enough. So families didn’t like going there.” Adding to Epcot’s lack of popularity was the fact that Disney’s Animal Kingdom Park had recently opened. Because of these, and other reasons, Epcot was chosen to be the host park for the millennium celebrations – it needed the millennium spectacular!

Logan asked Eisner multiple times what he wanted to see for a millennium celebration. Eisner replied, “Let me think about it.” When Eisner finally did get back to Logan and his team he gave them some ‘quick notes.’ He told them to talk about “yesterday,” “today,” and “tomorrow”. “That’s the only libretto he gave us,” said Logan. “So celebrate history, celebrate the day of, and celebrate the future.”

“I have learned through the years that simplicity is the best avenue,” said Logan. “The more simple the premise the more complicated the story can be. If the premise is too complicated, people won’t understand the story.”

Separately, the Disney Company Entertainment division had been developing a new lagoon show which was to be designed and directed by Mark Fisher. Fisher was a British architect who was best known for his rock music stage sets. He created big spectaculars using large oversized objects, including inflatables. In addition to concerts, Fisher designed the opening and closing numbers for the 2006 Winter Olympic Games in Torino, Italy, and the 2008 Summer Olympics in Beijing, China.

After a great deal of money was spent looking into Fisher’s proposed show it was scrapped in early 1997 because Eisner did not like it. He didn’t think the show was grand enough. “Mark was a brilliant artist,” said Logan. “But Eisner didn’t like the concept. He wasn’t vocal about it, but he told me and Don [Dorsey] about it. We got a lot of direction in some ways and in some ways no direction. Basically, the direction was ‘don’t do that.’”

Another benefit of having the Live Entertainment division in charge of the show was their location. Since we were in Florida it made things like construction easier. Dorsey and Logan had Disney’s Central Shops construct all the pieces needed for the new show. “I didn’t want to give it to a company in another country where we couldn’t control it,” said Logan. “That could have been a disaster.”

Whatever show the team created, it had to relate to the millennium. It also had to run for 10 years or longer. Don Dorsey finally decided that earth should be the theme for the show. He thought, “What is special about life on earth?” On a trip back to California, Dorsey wrote up a treatment for the show, faxed it to Scott Powhatan, Director of Epcot Entertainment with a note at the top that said, “Here is what I would do.” Within three months, Eisner gave it the green light and IllumiNations: Reflections of Earth was born.

It was decided that earth would tell its own story. “We spent a lot of time on the evolution of the story,” said Logan. “And we spent a lot of time discussing how to do that without directly introducing religion. We were always lucky enough to be able to do Christmas at the parks, but in regards to introducing something new – especially with this theme, creation, we had to be very careful.”

End of Part One