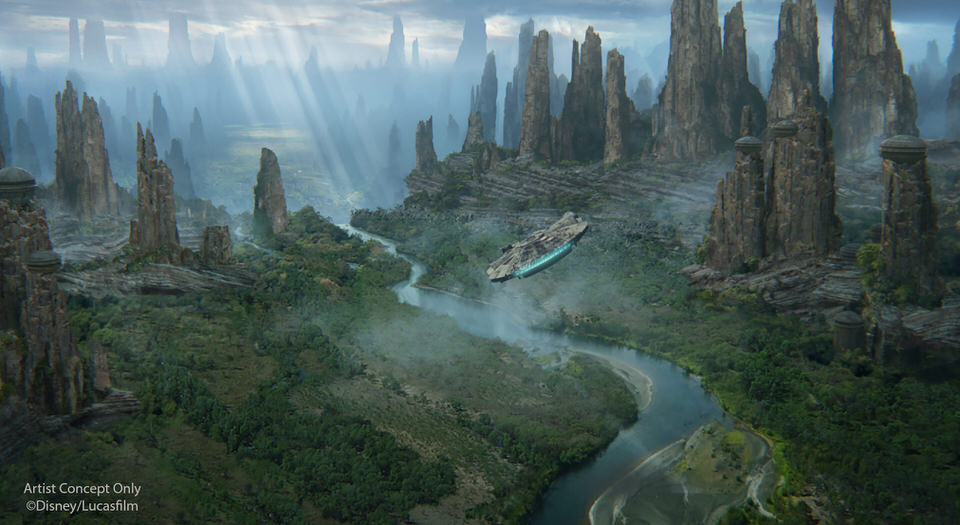 Star Wars: Galactic Nights returned to Disney’s Hollywood Studios on Sunday, May 27, just after the release of Solo: A Star Wars Story. Throughout the night, Star Wars characters were out and about, Galactic Destinations were projected onto Tower of Terror, and the night concluded with an updated Star Wars: A Galactic Spectacular to now include Solo! However, that is just a tiny fraction of what was actually happening during Galactic Nights. Let’s go over some of the highlights of the event.

Our night kicked off with the panel on Star Wars: Galaxy’s Edge, which was presented by a team of Imagineers. For the most part, this was a general recap of most of the information we already knew with a few more tidbits thrown in. The BIG ANNOUNCEMENT DURING the panel was the name of the village that we will be visiting on Batuu and it is… Black Spire Outpost. The area was essentially a river valley with tall trees towering over thousands of years ago, but the trees eroded and petrified and became the unique rock formations. As it became a crossroad for trade, people also began to notice it as a place for these spires. One particular spire was more unique and blacker than the rest leading to the name of the village.

We also found out that there will be a creature stall in the marketplace that was announced at the last Galactic Nights and if you’re lucky, you’ll be able to take one home. A lot of the creatures that will be seen haven’t made it out of Star Wars literature or the animated series, so it will be the first time they are actually brought to life. One such example is the Loth-cat from Star Wars Rebels. New photos were shown during the panel including a variety of pictures of the giant AT-AT Walkers as well as the Resistance Troop Transport that we first saw in a model form back at the 2017 D23 Expo. The attention to detail is what was stressed the most. People are working on Galaxy’s Edge all throughout the world, sometimes alongside the production of the Star Wars films, but nailing the details is priority number one. An example of that was by bringing back Kipsang Rotich, who you’ve probably never heard of before. Rotich is the voice for Nien Nunb, and he was uncredited when he recorded his voice for Return of the Jedi, so he had to be tracked down for voice work in The Force Awakens and well as for Galaxy’s Edge.

One of the coolest parts of Galactic Nights is the projection show on Tower of Terror. Yes, this temporarily takes away from the entire theme of the attraction for one night, but it’s pretty darn cool. This debuted during the last Galactic Nights in 2017, but a new destination was added for this year’s event that goes along with Solo: A Star Wars Story!

Warwick Davis hosted this year’s event as he has in the past and will probably do so in the future, but he wasn’t the only celebrity at the event. Creator of Her Universe and voice of Ahsoka Tano, Ashley Eckstein, was meeting guests, signing, and taking pictures. Joonas Suotamo, the man who has inherited the role of Chewbacca from the legend Peter Mayhew, was also at Galactic Nights for some question and answer opportunities. Suotamo has really been making the rounds lately to promote Solo: A Star Wars Story, but his energy is second to none and he cares about playing Chewbacca so much that it makes listening to his stories an absolute pleasure.

I mentioned that Galactic Destinations was updated to include Solo: A Star Wars Story, but it wasn’t the only thing updated. Star Wars: A Galaxy Far, Far Away was also slightly updated, but I couldn’t even really distinguish what had changed as I watched it in person. Star Wars: A Galactic Spectacular was updated as well, but this update was very noticeable. From what I could tell, it only included two new moments with characters from Solo: A Star Wars Story, but it got a great reaction from the crowd and is always a great way to end the night!

When I say that you can’t see everything in one night at Star Wars: Galactic Nights, I mean it. Besides everything I discussed, you still had the March of the First Order with Darth Vader, multiple photo ops throughout the park with characters, more specialty food than you could imagine with fun-filled pun names, a variety of specialty beverages, and of course, merchandise. There is so much happening that you really have to prioritize, and when you don’t choose correctly, you miss out on riding the Star Wars overlay of Rock ‘n’ Rollercoaster… Star Wars: Galactic Nights might not be for your everyday average Star Wars fan, but it includes some experiences that you just can’t get any day of the week at Disney’s Hollywood Studios. Galactic Nights is not a regularly occurring event, but if you’re trying to plan for the next one, it could be the weekend of Star Wars Episode IX’s theatrical release. However, Star Wars: Galaxy’s Edge should also be open by that point, so we will just have to wait and see what the future brings!