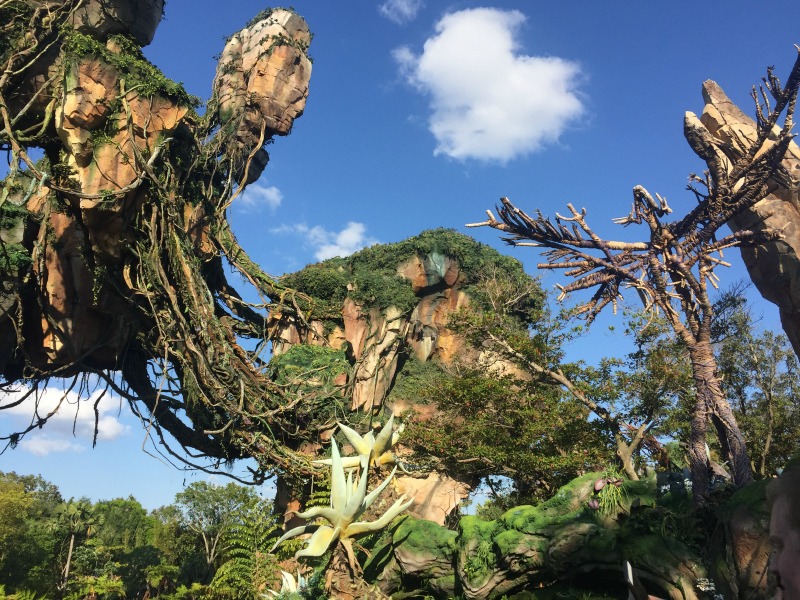 Editor’s note: Although this article was written when Pandora – The World of AVATAR first opened, there haven’t been any changes made to the attraction or their seats, and the information shared in this post is still applicable. As time goes on, “fluffier” people, as well as cast members, have learned how to better position themselves to get the locks to “click.”

I was given the opportunity to explore Pandora – The World of AVATAR during the previews being held for Walt Disney World Annual Passholders. While I’ll be writing an overview in the next few days, I want to share my experience on Flight of Passage today.

Most of you likely know that I don’t often have negative things to say about Disney; or much of anything, really, but you can always count on me to be honest. So, please keep in mind while you’re reading that I’m going to be completely honest about the experience I had, in hopes of giving all of you an idea of how things might go for you if you are, what the Disney fan community has grown to call “Pooh-Sized” – because, it is what it is, right?

After reading and learning what Flight of Passage would entail, I was actually rather nervous to ride the attraction. See, I don’t like simulators at all – no Star Tours, no Sum of all Thrills (before it closed), and definitely no Mission Space. In fact, the new Soarin’ Around the World kind of pushes me right to my limit; thank goodness I can close my eyes before we get too high up. Flight of Passage is something that I was intrigued by but scared to death of at the same time – for a couple of different reasons. The first one being the highly intense experience that I’m not a fan of.

The second reason was a much more personal issue; my size. Most of you have seen me on The DIS Unplugged and you know I’m not a small girl. Now, I’m only 5’ 2” so I’m short, but I’m also what I like to call, “fluffy.” We were getting close to my family’s scheduled preview of Pandora and I hadn’t seen any detailed information on any “fluffy” people being able to successfully ride this attraction. So, I sent a text message to my good friend John Panda; some of you may remember him as a guest on one of our shows. He’s a “fluffy” guy and he emphatically shared how excited he was that he was able to experience the attraction. My first thought was, “Dangit, now I really have no excuse.”

As we entered the FastPass+ queue for Flight of Passage, I was a nervous wreck; not about the thought of not fitting, but the thought of what would happen if I got too freaked out and could still feel crazy movements even if I closed my eyes. I continued walking through the stunning queue, nervous as all get-out and heart pounding like crazy at the thought of “flying” high in the air. There was so much to take in and so many intricate details all throughout the queue that we were ready to go into a small room for our briefing before I knew it. I started to get a little bit excited about the attraction as the group of sixteen of us were decontaminated then scanned and paired with our very own banshee.

We were led into where the “seats” were located and we all hopped on as if we were getting onto a motorcycle. We were warned before the piece that would lock us into our seats was raised. I started getting nervous again because once I was in, I wasn’t getting off until it was over. Would I be sick the rest of the day? Anyway, I felt the piece press on my lower back and click into place. Whew! But just then, two Cast Members were pushing on a piece of the seat of a woman three seats down from me, and, the next thing I knew, the Cast Members apologized, the woman got up and left the room. They came to my seat next. I felt the click on my lower back before, but apparently, something wasn’t right so they tried working on the back of my seat. Now, I’ve been seeing lots of folks say that if you have big calves, you might not be able to ride. I felt nothing on my calves whatsoever while the Cast Members worked on my seat and no sooner was told that I wouldn’t be able to ride because they couldn’t get the seat to lock in the right place. Remember the “click” I told you about? Apparently, that wasn’t THE click. I have no idea if my legs were too short (they’re certainly not too long!), if my stomach/chest prevented me from scooting up far enough, or if my rear-end was too big. Who knows?

I’d like to tell you all about how mortified and embarrassed I was, but I told you that I would be honest with you. I was so relieved that they couldn’t get my seat locked because I didn’t even want to ride anyway. My poor kiddos were visibly bummed that I had to get off, so I assured them that it was all good as I walked behind them and the empty seat from the woman who had to get off before me – I didn’t mention that she was also quite “fluffy” – more so than me according to my husband. I walked through the second room of sixteen people and saw four empty seats where “fluffy” people had to leave. I then sat down on a bench and had a great conversation with a very nice Cast Member while my kids enjoyed the attraction. She actually shared with me that they are keeping track of guests who have had to get off the ride because they couldn’t lock the seat. She told me that they have been taking note each time someone has to leave so that hopefully something might be able to change, which was a good thing because the larger couple sitting in the seats next to mine were walking out of the room next. I knew that it wasn’t their choice because the man was very angry, so angry that he threw his backpack down a flight of stairs on his way out.

I was sad. Not for myself, but sad that people had to feel like this. I told the Cast Member that this was actually the very first time in my whole life that I was unable to ride a Disney attraction because of my size. I’ll get over it because I was more scared to ride it than excited to ride it, but for those who were excited and then upset, I was sad. There was also a child whose parent was unable to ride and the Cast Member said the child couldn’t ride by themselves, which I thought was rather odd. The child was heart-broken and it made for a terribly sad scenario.

I walked through two rooms of sixteen people on my way out. Of those thirty-two people, seven had to get off of the attraction because their seats couldn’t be locked. Just a little math here – that means that 22% of the guests within those two rooms could not ride because of their size. TWENTY-TWO PERCENT. That is a really high number – too high of a number, in my humble opinion. If it were like two or three percent? Fine. Twenty-two percent is just too many people to turn away.

I share this with all of you not to make you upset, but to make you aware of what could happen to you. See, this is all about setting proper expectations. I made the decision to attempt to go on this attraction because someone I knew was able to ride without an issue. That did not mean that I would be able to ride without an issue, however. So, if you are “of a certain size,” head into Flight of Passage knowing that you might not be able to ride, and PLEASE do not let it ruin your day if you cannot, because it’s certainly not worth that!