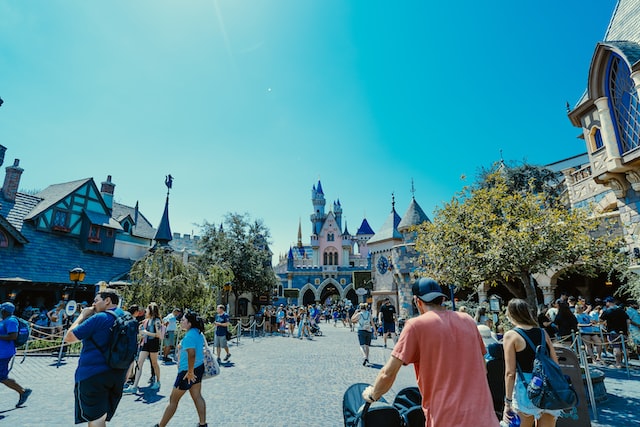 Welcome back to our semi-regular therapy session, where we get to deal with our fellow guests’ stressful, less-than-desirable behaviors among friends. Please don’t take it too seriously, blah, blah, you know the drill by now. If you’d like to catch up on our earlier session notes, you can find them here:

Phew, we have been doing this for a long time, haven’t we?

You know that flash is coming. You’ve been caught out before looking like you were about to do something terrible in your pants, while that photo captures the most climactic moment of the attraction. Mouth open, eyes rolled back in your head, double chin. I know; I’ve been there. This time, you’ve sworn it won’t happen again.

Having studied the camera’s location, you are convinced it will be the one time everyone looks great in your photo when you look back to reflect on the fabulous time you had with your family. You race down to the screens to see what your efforts have produced, only to find that the dude behind you has put on a Rafiki mask and is triumphantly holding up a plush Simba toy over your heads. Okay, yes, as someone who has many of these photos, that is very funny; however, if you consider that the family in the rest of that photo might only ever have one of these moments, and that is what is behind them, maybe not so funny for them.

Parking lots can be chaotic at the best of times, though comparatively, my experiences in Disney Parks parking areas are usually pretty tame and orderly. Thanks to well-marked areas and Cast Member attendants, locating the best position in the morning is pretty easy, that is, with the exception of one experience I had a few years ago with the Parking Aggressor.

This woman had passed through the gates behind me and was determined to park ahead of us. She took shortcuts through cones, ignored the directions of cast members, and sped around the outside of us to park one space ahead. As if that extra ten feet of distance was going to make a difference to 25,000-odd steps that were ahead of all of us that day. I hate to break it to you, lady, but it wasn’t worth all that drama; you get my first eye roll of the day.

This might be a bit of a controversial one, as I know there will be many of you out there that have the same first thought I would. Not all disabilities are visible; you shouldn’t judge. That is true, though the example I have of this monstrosity of a person is much more damning than you may assume.

I’m going to go the extra mile here and preface this by saying that as the mother of two kids with “invisible” disabilities, I can tell you I am usually the first to admit that I’m not owed any explanation for someone else’s additional needs. However, I am also the first to turn red when I overhear a family giggling because they ‘scammed‘ a DAS pass, boasting about how gullible the CM was. I’m going to get into this topic a little more in a few weeks’ time, but for now, these people are officially on the duck list! You know who you are…

Ahhh, I’ve been waiting for a while to unleash this one as it is something I see at least once every single trip, and every time, I think, are you serious? Have you ever been in the very long line for the women’s restrooms only to get to the front and almost trip over a woman sitting/kneeling down/bending over with a phone charger plugged into the outlet on the wall?

There are about 20 better ways to achieve this! What on earth are you doing in the toilets for long enough to get some decent charge into your phone? And why do you need to do it in one of the busiest indoor spaces there is, the women’s restroom?! Need more convincing about weird bathroom behavior? One year, I confess, this only occurred once: a woman was using a small travel hair dryer in the restrooms near Splash Mountain. If you are that prepared to dry your hair after a water ride, bring a poncho instead. And while you’re at it, throw a power bank in your bag as well.

You’ve seen this one. You get all excited, spying an empty table or two over in the corner, rushing over with your family and the trays of food you’ve just invested in, only to find a backpack sitting in a single chair on each table and a smug fella who leans over from a neighboring table to say sorry, all these seats are taken. At first, you accept it; indeed, his family isn’t too far behind. After you’ve enjoyed your meal at the table for two that you squeezed extra chairs into to fit six, you see that Bob is still sitting there, alone, marking out three tables for 16 family members that might not even exist at this point.

Is he getting a good spot for dinner at one o’clock in the afternoon? Or will he auction them off to the nearest desperate parent that can’t find anywhere for their children to sit down for a moment? It was frustrating when I thought he was banking tables before getting any food, but now seeing that he is hoarding seats for all his see-through friends from the Haunted Mansion? It’s hard not to wonder how some people manage to sleep at night. The bonus kicker to this story is when you pass by an hour later, and Bob’s family finally arrives. All five of them spread out over those three extra large tables that could have accommodated them all on one with room to spare. Thanks, Bob. Thanks a lot.

If you have found some way to pick apart this light-hearted look at some of the more irritating behaviors we come across in the parks by taking it too seriously, then take a breath. Not everything needs to be so intense. If you don’t identify with any of the ones below, feel free to add your own below.