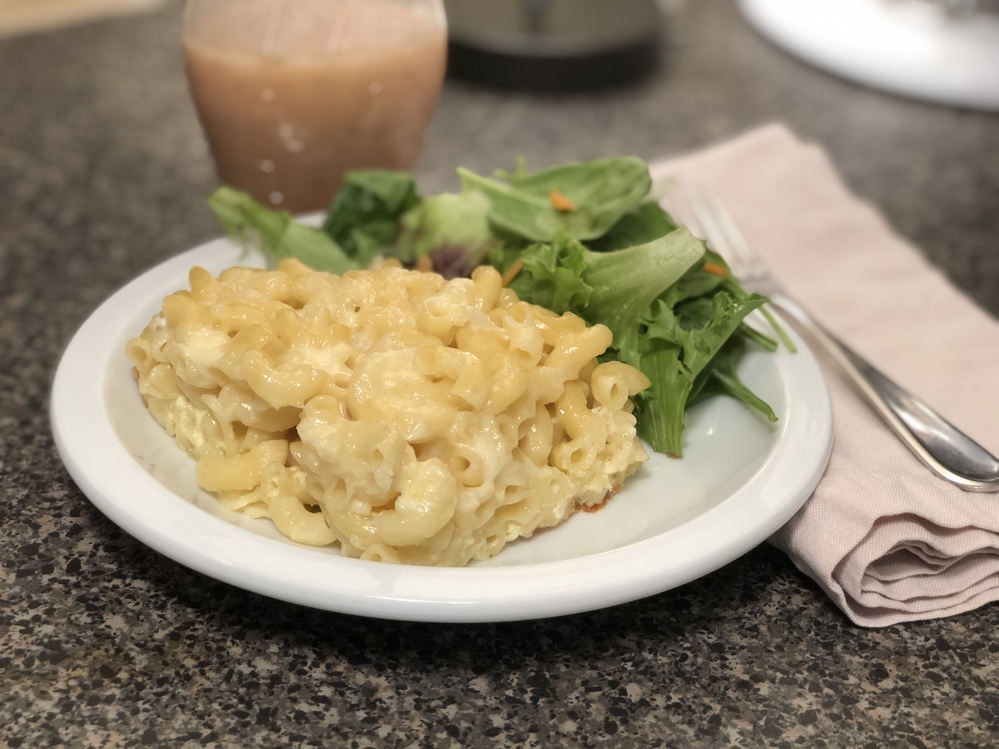 I know that our typical Saturday Snacks fare tends to be on the sweeter side of things, but it’s good to mix things up from time to time, and what better dish to mix things up with than a Walt Disney World dining staple: Biergarten‘s Nudel Gratin!

Just in case you missed it, back in May, we gave Sadness’s No-Cry Comfort Food mac and cheese a whirl. The Nudel Gratin is Biergarten’s version of a baked mac and cheese. And let’s face it: we can all use some warm, gooey and comforting mac and cheese from time to time, especially with Fall right around the corner. And 2020 is just giving us reason after reason for a little comfort food. Let’s hope the Nudel Gratin fits the bill.

Let’s jump in and get started. Go ahead and preheat your oven to 375 degrees. Also, start boiling a large pot of water for your elbow macaroni and spray a 16×9 glass dish with nonstick spray.

Once the water is ready, toss in the pasta and cook it to al dente, according to the directions on the package. You’ll want your noodles to have a bit of a bite rather than being too mushy.

Now comes the heavy cream. Be still my heart. I don’t know about you, but I love heavy cream. It makes any cup of coffee better, and, if you’ve got 45 minutes, a mason jar, and want an arm workout, you’ve got homemade butter. Yum!

Pour 2 cups of heavy cream into a bowl and follow up the cream with two eggs. This mixture will lean toward being a bit of a creamy custard when everything’s said and done.

After adding the cream and eggs, toss in 1/4 teaspoon of salt, a pinch of nutmeg and a pinch of ground white pepper.

Give everything a good whisking, and set the custard mixture aside.

If you didn’t purchase pre-shredded cheese, it’s time to work those biceps. My favorite way to shred cheese is by using my Salad Shooter. Unfortunately, my Salad Shooter’s shredding cone is broken, and the replacement that I’ve ordered has yet to arrive, so I had to shred the cheese by hand. There’s just something magical about freshly shredded cheese, so I didn’t mind the small effort required. Eyes on the prize.

After you’ve finished shredding the 4 ounces of Swiss and white cheddar, mix the two cheeses together, measure 1 cup, and set it aside. You’ll need that glorious cup of cheese later.

The remaining cheese now gets combined with the cream and eggs mixture.

Once the cheese and liquids are fully combined, add them to the elbow pasta. Mix the two together completely.

Grab your greased 16×9 pan, and pour in the pasta. Spread the pasta out evenly, and cover the pan with foil. Place the pan in the oven, and set a timer for 30 minutes.

After the gratin has baked for 30 minutes, remove the foil and sprinkle the cup of cheese that you set aside earlier evenly over the top of the pasta.

Place the uncovered dish back into the oven for 15 minutes. And toss a salad or steam a few green beans. Maybe this Saturday Snack will be more of a light dinner. When I told my youngest that I was making the Nudel Gratin for today’s snack, the argument that it was more of a Saturday Supper was brought up. And now my youngest wants credit for “Saturday Supper,” and wishes to trademark it. Ahem.

After 15 minutes have passed, and the divine smell of melting cheese has filled your kitchen, pull the dish out of the oven and allow it to cool for 10 minutes or so.

After 10 minutes, grab a knife and carve out a square, or take a fork to the dish. It’s up to you. I won’t judge. I promise.

Allowing the dish to rest makes it possible for a portion to be cut out as a square, and allows the cheeses and cream to settle in and get happy.

Biergarten’s Nudel Gratin is a gooey, cheesy baked mac and cheese. I enjoyed the addition of the Swiss cheese as I’m most used to baked macaroni and cheese dishes with various types of cheddars. The Swiss gave it an unexpected layer of flavor. And see that glorious crust on the bottom? Yep, that’s good stuff right there. To be honest, that was my favorite part of the dish.

In thinking through what I might change about the recipe when I make it again, I’d definitely go ahead and use the rest of the blocks of cheese. More cheese is always a good thing in my book, and I found myself wanting just a bit more cheese in the dish. I’d also add an additional cup or so of heavy cream, and probably a touch more salt (although I might not need to if I use the additional cheese). While the Nudel Gratin was really good, there were noodles that didn’t get coated with cheese, so bumping up the cream and cheese makes sense to me.

Have you been to Biergarten in EPCOT? If so, what’s your favorite dish? Personally, I could eat their pretzel rolls until the cows came home, and I’d stuff them in my pockets for later if they let me. If you’re looking to try the Nudel Gratin, it can also be found at Sommerfest, the Germany pavilion‘s quick service dining location, when it’s open.

I hope that your weekend is filled with great moments, and, of course, yummy food! Have a great one!

Ready to give Biergarten’s Nudel Gratin a try? The recipe is below: