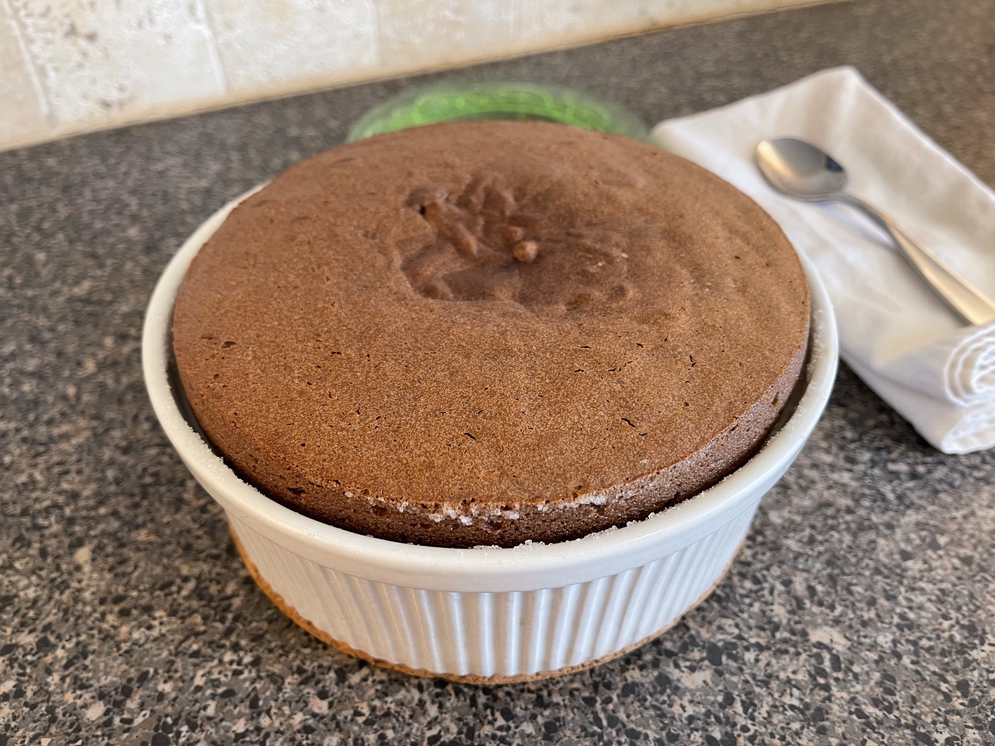 Ahhh, the chocolate soufflé. The guest star of many a classic sitcom. You know those episodes: hapless dad or well-meaning children or harried housewife tries to create a special dessert for Mother’s Day or family celebration or whatever and everything’s going well until it’s pulled out of the oven and a loud sound is made or some small thing happens and the entire thing dramatically deflates. Ahh, yes. The elusive, seemingly difficult to create chocolate soufflé.

But what if I told you that constructing a soufflé isn’t as difficult as The Mary Tyler Moore Show led you to believe it was? What if told you that it’s made of fairly simple ingredients and doesn’t require you to be Julia Child in order to pull the whole thing off? Well, friends, as we pull up our chairs around our virtual kitchen table, picture me leaning forward to whisper this truth in a hushed tone like it was the hottest gossip in town. Soufflés aren’t difficult to make. I promise.

Today’s Saturday Snacks recipe has us making a virtual visit to Walt Disney World’s AAA Five Diamond Award-winning restaurant, Victoria & Albert’s. Located on the second floor of Disney’s Grand Floridian Resort, this dining location, and its chef’s table, is the stuff of legend. And, so is its price tag. I haven’t been, but the tales I’ve heard are quite intriguing. Victoria & Albert’s is currently closed, so, in the meantime, inviting some of its dessert magic into our kitchens only makes sense.

While the chocolate soufflé isn’t on the latest iteration of the restaurant’s menu, we can find the classic recipe in Cooking with Mickey and the Walt Disney World Chefs. The recipe is from renowned chef Scott Hunnel, who has also contributed to the menu for Disney Cruise Line‘s Remy, among many other things.

One thing is fairly important when baking a soufflé: you need a straight-sided dish in which to bake it. The soufflé will climb the sides of the dish as it bakes, and will result in a puffy, straight-sided soufflé that rises above the top of the dish. Years and years ago, my hubby’s second cousin gave us a bowl for Christmas. It was years before I discovered what that bowl actually was; I had just used it for serving green beans and such during dinner. Little did I know that that cute round dish was made for constructing lovely soufflés.

We’re not completely new to the soufflé game here at Saturday Snacks, as we made Palo’s Chocolate Soufflés last May, but those were individually portioned; today, we’re going for the big sitcom-starring kahuna.

In order to make Vicky & Al’s (as their friends call them) Chocolate Soufflé, we need a vanilla bean. While I’ve watched copious amounts of Food Network over the years and I’ve heard chefs talk about using vanilla beans time and time again, I’d never used a whole vanilla bean myself. A quick Google search resulted in the knowledge that my local stores couldn’t help me – at least not at a price point that I considered acceptable. A search on Amazon, however, proved to be fruitful. I quickly ordered 3 vanilla beans for $4.95, and two days later, they were sitting next to my front door. The rest of the ingredients were easily found at my grocery store or in my pantry.

Our first step is to separate six eggs. Getting those yolks in one bowl and whites in another now will help you in the long run. While soufflé-making isn’t hard, once it gets going, there’s not a lot of downtime.

Grab a roasting pan (or a similar large pan that only gets used at Thanksgiving) and fill it halfway with water. The recipe asks us to fill the pan to almost full, but my soufflé pan isn’t the tallest, so to be sure, I placed it in the roasting pan and then filled the water to just below where the top of my soufflé pan would be. Place the water-filled roasting pan in the oven and preheat the oven to 350 degrees.

Next, take your souffle dish and rub a pat of butter around the bottom and sides. Next, toss a 1/8 cup or so of sugar into the dish and swirl it around to ensure that the entire surface is covered with sugar. Toss out the excess sugar.

The next step is to grab a larger saucepan and toss in the 1/4 cup of butter. Melt the butter over medium heat, and, once it’s good and melted, add in the 1/2 cup of flour and stir constantly for 2 minutes.

I grabbed my mini whisk for the job, and it was exactly what I needed. Just keep whisking or stirring, and once the 2 minutes are up, take the saucepan off of the heat.

The recipe now calls for us to grab a smaller saucepan and scald the 2 cups of milk. I paused for a quick moment to learn exactly how to do such a thing. It turns out that scalding milk simply means to allow it to get to just over 180 degrees.

I grabbed the kitchen thermometer that my mom-in-law gave me years ago, tossed the 1/4 cup of sugar and the vanilla bean in with the milk, and turned the heat to medium-high.

Once the milk reached just over 180 degrees, I took the saucepan off of the heat, fished the vanilla bean out of the pan, and cut it open with my kitchen shears. I used a spoon to scrape out the beans like the recipe asked me to and added the beans back into the milk mixture in the saucepan.

I grabbed my whisk and got the beans as incorporated as I could.

With both saucepans off of the heat, we now add the milk mixture to the flour mixture and stir like there’s no tomorrow. Place the pan back on medium heat and keep stirring for 3 minutes, or until the mixture get thick and starts boiling, which for me, was much sooner than 3 minutes. Pull that pan back off of the heat and let it cool just a bit because you’re about to stir in 6 egg yolks, and the last thing you want in that saucepan is scrambled eggs.

One at a time, add in the 6 egg yolks. Stir in each egg completely before adding the next. Keep stirring until the mixture takes on a shiny sheen and is smooth. I had to throw in a bit of extra elbow grease to get the mixture to the point where I felt that it was smoother, but it wasn’t too bad at all.

Once all 6 egg yolks are in and things are somewhat smooth, it’s time to break up that chocolate and stir it in. And take a small nibble for yourself. You deserve it. You’re making a soufflé, after all.

In the bowl of a stand mixer (or a large bowl and using a hand mixer), toss in the 6 egg whites and turn the beater to high. You’re going to want the whites to get to the point where they are forming peaks that are just shy of stiff, and it’s going to take a few minutes.

Once the whites get to where you want them, whisk 1/3 of them into the chocolate mixture in the saucepan. Once the first third is incorporated, carefully fold in the remaining egg whites. Remember that folding in those whites is just a gentle turn of the spoon; it’ll look like you’re not getting anywhere at first, but trust the process. It’ll come together. And channel a little David and Moira Rose while you’re at it.

The time has now come to pour the batter into your prepared soufflé dish and place the filled dish into the roasting pan of hot water. You can do this. This is when the magic happens.

Fill that dish and place it gently in the water bath, whisper encouraging words to it, and close that oven door. It’s out of your hands now.

When your soufflé comes out of the oven, the recipe tells us to serve it immediately. No waiting, no hesitating. If you’re like me and can’t stand having to wait to let things cool, this is your time to shine. This is also your time to get out anything that you want to serve with your soufflé, like ice cream or chocolate sauce or leftover M&M’s from Halloween. Once that baby comes out of the oven, it’s go time.

The recipe tells us that the soufflé is to bake for 35 to 40 minutes or until it’s “well risen.” At 30 minutes, my soufflé clearly needed more time. At 35 minutes, the center was still very soft, so I kept it in the oven for the full 40 minutes. When time was up, a lovely, risen soufflé emerged.

The soufflé was light and airy, and impressive to look at, which is a huge part of the panache of a soufflé, in my opinion. All of the sitcom moms would be proud of me.

The best way to serve the dessert is to take a serving spoon and scoop big spoonfuls of the hot soufflé right onto small plates or into bowls.

I tried pairing mine with a small scoop or two (or three) of vanilla ice cream, both with and without a drizzle of dark chocolate sauce that just happened to be hanging out in the fridge. Yummm.

I enjoyed the soufflé, and was proud of my accomplishment, but I found that it wasn’t quite as chocolatey as I had thought it would be. I mean, it was served in Victoria & Albert’s, the crown jewel of all Walt Disney World restaurants, so I expected a bit more. Upon further reflection, I think that I can get that depth of chocolatey flavor I’m looking for from either a better chocolate (not knocking Ghirardelli, but you know what I mean), or a darker chocolate.

All in all, this was good! It was fun to make, and fun to see turn out looking as I hoped. And it was equally fun to discover that something that has appeared unattainable was actually quite the opposite. A fancy dessert that’s completely doable? Yep, on a chilly weekend, it’s just what we need.

If you give Vicky & Al’s soufflé a try, please let me know how it goes and what your thoughts are! We’re all in this Disney snack adventure together and I love getting to learn from you!

Whatever you’re up to this weekend, I hope that it’s a great one. And, if you’re in Texas, please know that you’re on my mind and heart during these difficult days. I can’t imagine what you’re going through. Please check in down in the comments if you’re able to.

Ready to invite a little Disney dessert magic into your kitchen? The recipe for the chocolate soufflé is below: