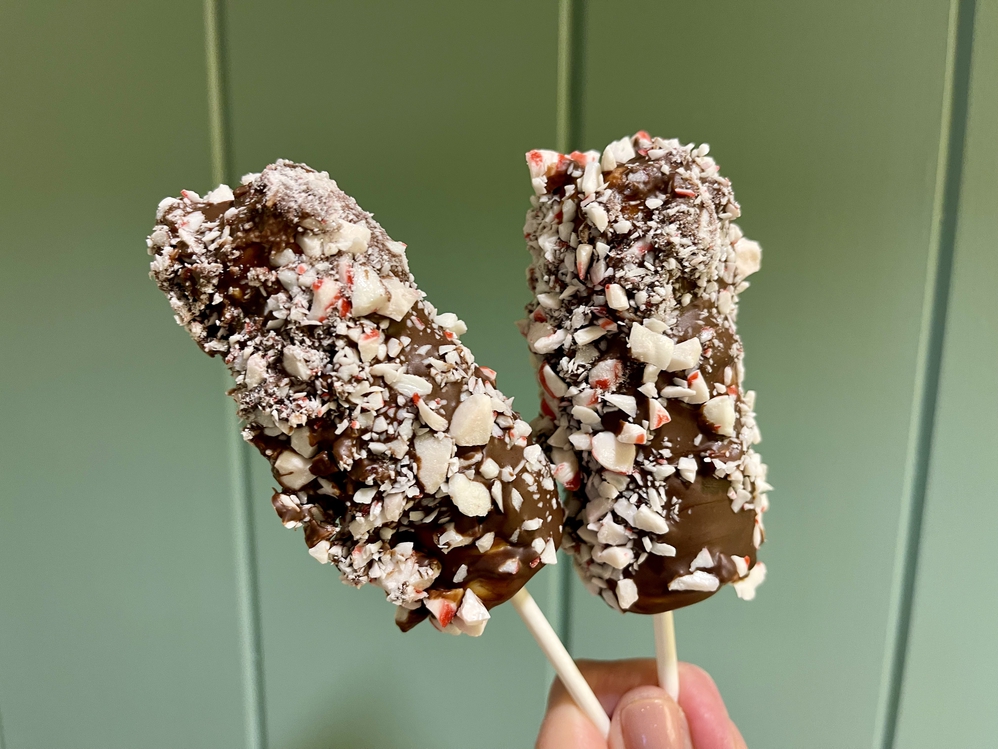 From time to time, I’ll come across a recipe that I squirrel away for just the right occasion. Today’s recipe is one of those special save-it-til-we-really-need-it types. We’re channeling a bit of Disneyland magic for Saturday Snacks today, and it’s not just Disneyland magic, it’s Disneyland during the holidays magic. The very best kind, right?

You and I have made a couple different versions of Disney park marshmallow wands over the past 21 months. There have been chocolate and mini M&M-covered marshmallow wands, and more recently, Disneyland’s Churro Toffee Wands. Over the years in the Disney parks, I would gaze longingly at treats like the marshmallow wands in the refrigerated confection case, but would never actually stop and buy one. That ended a couple of years ago when I purchased my first mini M&M marshmallow wand in Magic Kingdom’s Big Top Treats. Three jumbo marshmallows covered in caramel, chocolate, and candy? Yes, please. And twice on Sunday.

Disney’s marshmallow wands have a way of making us connect with the kids in all of us, and the happiness that they bring is contagious. Share a marshmallow wand with a friend, and watch their face light up. Such was the case when I whipped up Marceline Confectionery’s Peppermint Marshmallow Wands at Disney’s Old Key West Resort three weeks ago. Fiasco was the cameraman for the recipe’s vlog (released earlier this morning), and, when I made them, he jumped in to help unwrap the peppermints and get them ready. He also jumped in to help gobble up the marshmallow wands when I invited him to once everything was said and done. These amazing little treats just have a way of unlocking our inner child, which is especially wonderful during the holiday season.

I’ve learned to keep peppermint candies on hand and at the ready at all times. You just never know when you’re going to need them. You can get a hold of candy canes rather easily this time of year, but when it’s not the holiday season and you have a hankering for all things peppermint, those candies hanging out in your pantry will be your BFF.

The ingredients for today’s recipe are incredibly simple and easy to find in any grocery store whether it’s yours at home or the Publix down the street from Walt Disney World. And making these treats in a Disney Vacation Club villa was incredibly simple as well; the pots, pans and utensils needed were already in the villa’s kitchen. As I explained last week and the week before, I did bring my set of measuring cups and measuring spoons from home. If you’re going to be staying in a DVC villa, these simple items from home can be easily tossed in your suitcase and brought along for the ride.

We’re to pick up two jars of hot caramel for this recipe. When you’re standing there in front of the ice cream toppings at the store, pay close attention to which caramel you put into your cart. There are likely two types of caramel sitting on that grocery store shelf: caramel and hot caramel. We need the hot caramel variety when it comes to re-creating Disney’s marshmallow wands.

We also need a 10-ounce bag of dark melting chocolate (Ghirardelli, how we love thee) and eight large lollipop sticks. If you’re fresh out of lollipop sticks, sturdy drinking straws can also fit the bill.

Once I had the peppermint crushed and ready to go, it was time to turn my attention to the two jars of hot caramel. I poured the caramel into a small sauce pan and brought it up to temp over medium-low heat. You and I are to keep that caramel warm while it waits for our marshmallow wands, so my suggestion is to turn it to low and keep an eye on that sauce pan.

A step that you and I need to make sure that we do is to give the hot caramel a chance to drip off of the marshmallow wands. If we keep all of the hot caramel on the marshmallows, they’ll have a really hard time setting, and they’ll turn out being really gloppy (technical term). I gently tapped the marshmallow wand on the side of the sauce pan and tried to carefully let the excess caramel drip back into the pan. Once all eight marshmallow wands were covered, I placed them on a piece of parchment paper to set. I hit the timer for 30 minutes and walked away, hoping that they would do what they needed to.

After 30 minutes, the caramel had done more of a soft set than a legitimate full set. If you have extra time and want to allow the caramel to harden just a bit more, hit the timer for a few extra minutes. Patience will be your friend here.

While the wands were setting up, I grabbed another sauce pan and melted the dark chocolate. The key here is to keep that chocolate warm, so be sure to keep everything on a nice, low heat.

Once your caramel gets to the point where you’re happy with it, you can roll your marshmallow wands through the dark chocolate. I did this step incredibly carefully, and tried my best to get as much of the excess dark chocolate off of each wand as possible.

The recipe now asks that we roll the chocolate-covered wand through the crushed peppermints. And this is where I have experienced the wheels coming off of the wagon in the past when making marshmallow wands. Sigh.

Ultimately, I was okay with only having four peppermint wands. That being said, I think that I’ll try next time to divide the peppermint candy up into two batches with one batch of candy being for the first four wands and the second batch being for the last four. I’m hoping it’ll work, but if not, it was it was worth a shot.

Once I had as much crushed peppermint covering the dark chocolate as humanly possible, I placed the marshmallow wands on a sheet of parchment paper to set. The recipe tells us that it should only take 15 minutes. Do not believe the recipe. Bless its heart, it lies. Those wands will need more than 15 minutes, so settle in. Or clean up the kitchen. Or make another snack. Ahem.

Our next step is to enjoy our Peppermint Marshmallow Wands. Believe it or not, with all of the snack-making fun that was happening in that DVC villa, I didn’t chomp into my marshmallow wand until later that evening. And friends, it was exactly what I wanted it to be: two of my very favorite flavors coming together to create a classic holiday treat.

This recipe would be a perfect one to create a little Disney holiday fun in your kitchen this weekend. Have little ones around? Recruit them. They’re the perfect sous chefs for the snack. On your own? Those marshmallow wands are yours and yours alone (insert evil genius cackle here). Store them in your fridge to keep them fresh until you’re ready to enjoy them.

If you decide to make the Peppermint Marshmallow Wands, please let me know in the comment section below so I can celebrate with you. Thanks so much for stopping by and giving this a read. I hope that your holiday season is off to a good start, and if not, these marshmallow wands are here to change the narrative. They’ll turn any day around. Guaranteed.

If you want a little and entertainment for your weekend, the video of me making the Peppermint Marshmallow Wands is below:

Ready to whip up a little Disney parks magic in your own kitchen? The recipe for the Peppermint Marshmallow Wands is below: