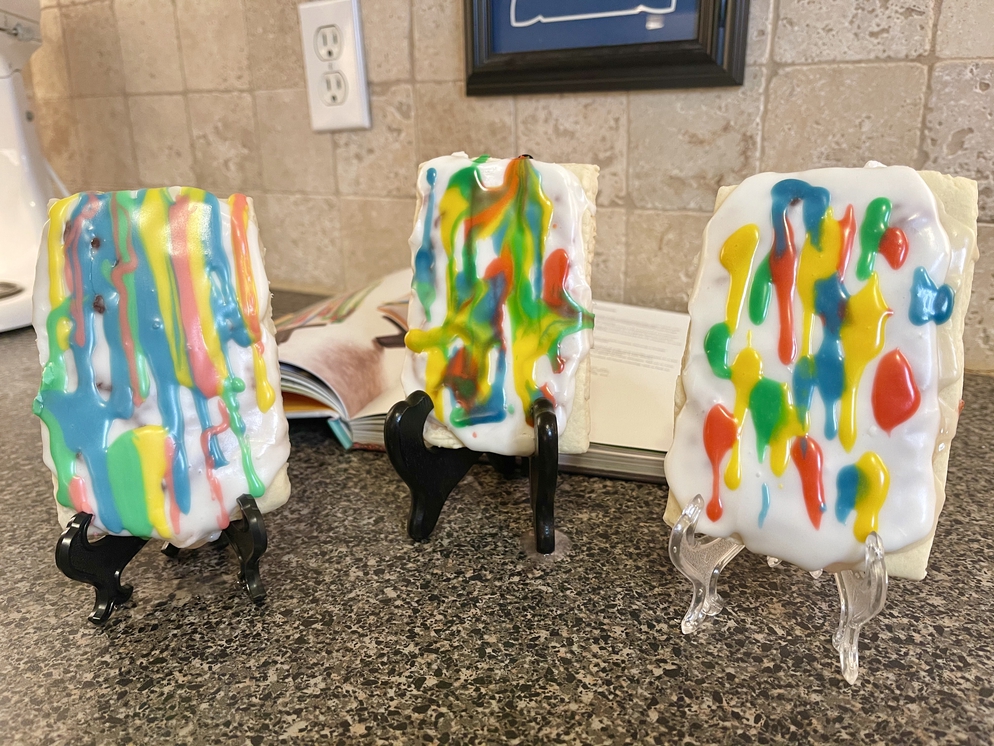 Over the last month here at Saturday Snacks, we've invited all sorts of iconic holiday flavors into our kitchens, from peppermint to ginger and molasses, and, of course, deep, rich chocolate. It's been a good run of all things holiday yumminess.

For the first Saturday Snacks recipe of the new year, it only made sense that we turn our attention to the next big thing on the Walt Disney World calendar: the Taste of EPCOT International Festival of the Arts. The festival begins this Friday, and today, we'll be taking a swing a recreating what seems to be the colorful treat that pops up the most in the festival's promotional pieces: the Pop't Art Cookie.

Yes, the play on words is cute, as this treat looks like both a Pop Tart and like pop art, but would the taste of the Pop't Art Cookie that we make at home live up to it's cheeky name? We'll find out.

I've not had the Pop't Art Cookie in the park, but it's on my must-eat list for this year's festival, that's for sure. Just in case you won't be able to be here for this year's Festival of the Arts, this will be the perfect chance to invite a little bit of Disney magic into your own kitchen.

The list of ingredients is simple and short; as long as you have strawberry jam, food coloring and a few other things, you'll be good to go.

Our first step is to create the sugar cookie for the base of the Pop't Art Cookie. To begin constructing the dough, place two sticks of butter into the bowl of a stand mixer (or grab your favorite large mixing bowl and your hand mixer), and cream the butter together with 1/2 cup of granulated sugar. While the recipe doesn't specify it, it's best if you leave the butter out on the counter to come up to room temp before creaming it with the sugar. Be sure to scrape down the sides of the bowl throughout the process of creaming the two; we want to be sure that everything's completely combined.

After adding an egg white and beating it for one minute, carefully add in 2 1/2 cups of flour a bit at a time. Along with the flour, add in 1/8 teaspoon of salt.

As you add in the flour and salt and continue mixing, the sugar cookie dough will begin to form. As the dough takes shape, little bits of half-mixed dough will want to hang out at the bottom of the bowl. Stop the mixer and get in there with a spatula to make sure that everything gets picked up by the beater. Nothing gets left behind. Show that dough who's boss.

Once the dough has come together, cover the bowl and place it in the fridge for 30 minutes. While the dough is chilling, take a minute to line a baking pan with parchment paper and preheat the oven to 300 degrees.

Once 30 minutes is up, place the dough on a floured surface. The recipe asks that we lightly flour the surface that we'll be rolling the dough out on, however, I found that going light on the flour didn't prevent it from sticking to my counter or the glass I was using to roll the dough out.

As a quick aside, back at the beginning of November, I sorted though the boxes in my garage in hopes of finding one of my two missing rolling pins. Unfortunately, my search came up empty. I'll be hunting one down on Amazon in the days ahead. Sniffle.

Using a rolling pin, or drink glass, or whatever you've got that'll help get that dough flat, roll the dough to 1/4-inch thickness. Periodically rub some flour onto the surface of your rolling pin to ensure that the dough doesn't stick.

Using a sharp knife, cut a total of six 3x5-inch rectangles out of the dough once you've rolled it out. You'll have some dough left over. I'm not exactly sure why the chefs didn't just ask us to cut out seven or eight cookies, but feel free to do whatever you'd like with that extra dough. Having bonus cookies isn't a bad thing, right?

Place the dough onto the baking pan(s), and give them a trim if you need to get them back into shape just a bit. I decided to place the sixth one on an separate pan. I just didn't want to place the cookies too close to each other. It turns out I could have squeezed that cookie onto the same pan as the dough didn't expand during the baking process.

Once the cookies come out of the oven, let them cool completely.

After the cookies have cooled, the recipe calls for us to spread 1 tablespoon of jam onto each cookie. Once I got to the next step of glazing the cookies, I found that 1 tablespoon of jam was way too much for the glaze to fully cover, so I scraped some off. Also, try not to take the jam to the edges of the cookies; be sure to leave a bit of space around the surface of each one.

We've now come to the spot in today's recipe where I went a bit rogue. I like to stick to the recipe for Saturday Snacks, but when the recipe deviates from the intended result, I have to back up and punt. Today's recipe was one of those instances.

Our next step in the recipe is to make the glaze that will coat and cover the jam completely. Another quick aside: dear Disney, if you're going to show me the picture of a perfectly constructed snack (or we're making something that guests have purchased in park for years, please ensure that the recipe comes a bit closer to replicating what is seen in the picture. Ahem. Aside done.

I found that the glaze, constructed as per the recipe using even the minimum amount of milk called for, was too thin and runny to cover the jam.

And, after I added the requested 2 teaspoons of vanilla extract to the 1 1/2 cups of powdered sugar and 3 tablespoons milk, it also had a tan color unlike the white, thick glaze seen in the picture. I know that I could run to the store to pick up clear vanilla flavoring, but if the recipe is going to ask us to use vanilla extract, it should do the trick. Sigh.

That's when I decided to go off script. We'll show that glaze who's boss. After dipping the jam-covered cookie jam side down into the thin glaze like instructed and seeing that it didn't quite cut the mustard, I redid the glaze. This time, I left out the vanilla extract (I wanted to try to make use of what I had on hand, and clear vanilla wasn't in the cabinet), and I took the milk down to 2 1/2 tablespoons. What resulted was a thicker sweet glaze. The cookies themselves aren't very sweet at all (weird for a sugar cookie), so I figured that the sweetness of the glaze, paired with the sweetness of the jam would be okay.

I spooned the glaze onto the cookie, since dipping the cookie into the glaze ended up in chunks of cookie being left behind in the glaze, which just added to my heartburn about the whole glaze thing.

Spooning on the glaze proved to be the way to go, and, in order to completely cover all of the jam, after the first layer of glaze cooled, I added another layer. More is always better, right?

While you're glazing the cookies, save a bit of glaze in a small bowl and set it aside. After the glaze has completely cooled, grab that small bowl and divide the glaze into additional small bowls (I called my beloved Pyrex ramekins off the bench for this task) and place two drops of food coloring into each small bowl.

This is another instance when the recipe doesn't quite replicate what was done in park. We're told that the colored glaze that creates the "art" portion of the Pop't Art Cookie is to be drizzled onto each cookie with a fork. After I began doing so, and the colored glaze expanded instead of staying in lines like in the picture, and I realized that the chefs must have made a very thick batch of glaze, mixed in a bit of food coloring, and piped it onto each cookie. So, you do you. Want thinner glaze? Use the fork method. Want thicker lines that hold their shape? Make some thick glaze using powdered sugar and very little milk.

I used a fork for my colored glaze, and made a thicker glaze once I saw that the original glaze was tending to spread. Let the glaze dry completely by placing the cookies on a wire rack and walking away. And, if you're just slightly frustrated about that glaze not behaving, you'll want to walk away. Or throw the cookies across the kitchen. Either one. Again, you do you.

When all was said and done, I was okay with the end result. I gathered up the little decorative plate easels that I had on various shelves around the house, washed them up, and had a little photo shoot.

As I mentioned earlier, the sugar cookie wasn't very sweet at all. It personally wasn't my favorite cookie, but when pairing it with the jam and glaze, I understand why the chefs opted for a dough that could hold up to the sweetness without making the whole thing cavity-inducing.

It was fun to try something completely different from other recipes that we've tried; but this is why you don't show the end result to preschoolers when you're doing an art project with them. It's frustrating when what you've made looks different than what you thought it would.

That being said, if I made the cookie again, I will definitely start off the bat with constructing a thicker glaze and adding the colored glaze with a very thin tip on a piping bag or four.

Did you whip up any treats in your kitchen over the holidays? What was your favorite? Please share below!

Whatever you're up to this first weekend of 2021, I hope that it's filled with moments that bring you joy sprinkled with a bit of rest. Last year was a lot, and things are still a bit much, so let's pace ourselves. And, of course, let's eat something yummy along the way.

Ready to create some art of your own? The Pop't Art Cookie recipe is below:

Spread 1 tablespoon strawberry jam on each cookie, leaving a border of about 1/8 inch around edges. Set aside.