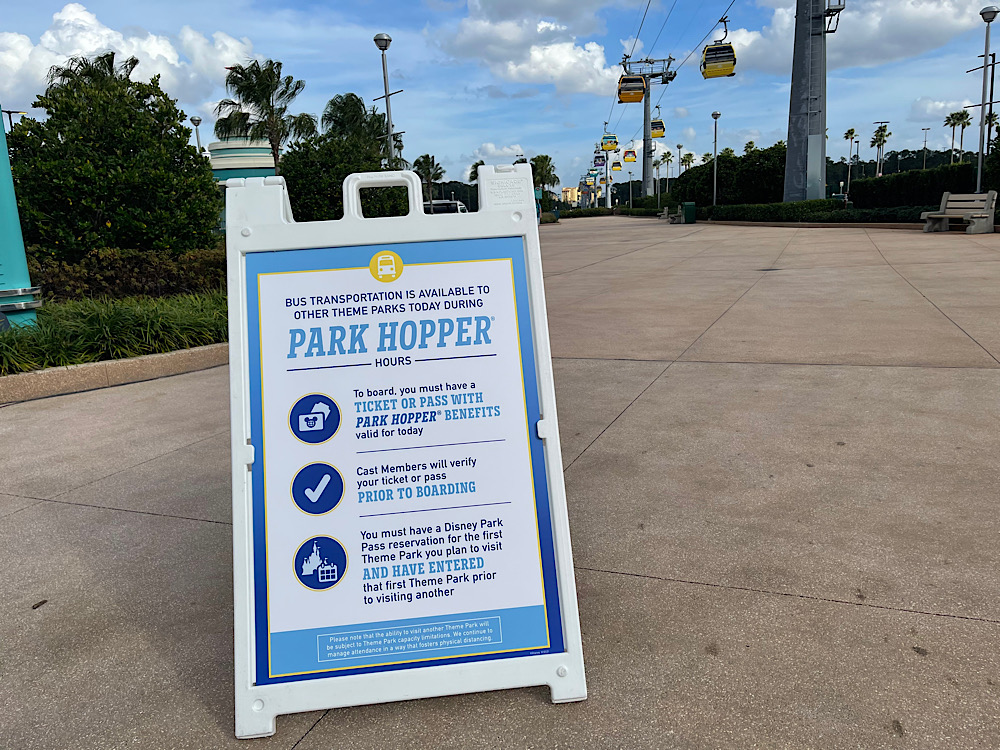 The new year has ushered in the return of something near and dear to Walt Disney World guests: park hopping. The current state of park hopping is different than what you and I have utilized in the past, so I thought it might be a good thing to touch base on what’s what with the new modified park hopping capability. I park hopped to all four Disney World parks today, so I’d like to share a few things that I picked up along the way. Ready? Grab your MagicBand and let’s go!

Speaking of MagicBands, that’s my first piece of advice from my park hopping experience today: if you plan to hit several parks in the same day, and you want to travel via the Disney park-to-park buses, wear a MagicBand. At each park, as you approach the bus terminal, a cast member will scan your ticket media to confirm that you have park hopping capabilities. Yes, I could fish my annual pass out of my backpack every time that I needed it, but wearing my MagicBand made things infinitely easier. A simple scan, and I was on my way.

But before I could be on my way to another park, I needed to check in at the park that I had a park pass for that day. Once guests make a park pass and scan their ticket media at that park, they are able to park hop to another park. Keep in mind that you won’t be able to enter that second park until 2pm, but as long as it’s after 2, you’ll be good to go.

If the park that you wish to hop to is currently at capacity, the cast member at the bus terminal will let you know. There won’t be any guessing required on your part. According to cast members that I talked to today, an alert will also be posted in the My Disney Experience app if a park is at capacity. You can also call a special recording that’s been established by Guest Relations that will let you know if any of the four WDW parks have reached their limit. That special recording can be reached by calling 407-560-5000.

I had a park pass today for EPCOT. I entered the park, and once I was ready to park hop, I left the park and headed toward the bus stops. Along the walkway to the bus area, I reached a spot where a cast member asked if I had park hopping capability, which, as an annual passholder, I do. They directed me to continue to the bus stop for the park I wished to hop to.

I decided to head over to Hollywood Studios to see how crowds were with guests park hopping for the afternoon. I would normally take the Skyliner between the two, but I wanted to be able to check out the experience park hopping via the buses, so I stuck with that. I was told that if you park hop via the Skyliner, your ticket media is not scanned as guests could be heading to a resort rather than a park.

A second cast member scanned my MagicBand once I arrived at the bus stop area to confirm that I was eligible to park hop, and I was directed to the Studios stop. The bus arrived in just 5 minutes, and I was on my way.

There were no lines to get into each park, including Hollywood Studios. Crowd levels inside the parks are usually higher on the weekends, so I wasn’t completely surprised that Millennium Falcon – Smugglers Run was a 90-minute wait. Slinky Dog Dash was at 80 minutes, and Mickey and Minnie’s Runaway Railway was a 45-minute wait. We’ll need to keep an eye out to see how the afternoon crowds are impacted now that park hopping has returned.

My afternoon took me from EPCOT to Hollywood Studios to Animal Kingdom and Magic Kingdom and, finally, back to EPCOT. As I sit here near the waterfall in the Canada pavilion writing this, I can’t tell you how good it was to have the ability to park hop again. It was wonderful. Yes, you and I need a park pass first, and we need to enter that park before heading to another one, but it just felt so good to be able to have the option to visit more than one park in a day.

Of course, you don’t need to use the Disney buses in order to park hop, but I enjoy riding on them, so for me, it was perfect. Keep in mind that barriers have been placed in the buses to help promote physical distancing and your bus driver will ask you to sit in a certain numbered seating area. In my mind, sitting in that seat after you’ve been trekking around a Disney park or three and charging your phone via the under-seat USB ports or utilizing the onboard WiFi is a lovely thing.

I have no complaints about my experience park hopping to all four Disney World parks today. At each stop, the cast members knew just what to do. Policies were consistent, clearly explained, and adhered to. It was as if they’d been running this modified version of park hopping and all of its required scanning, checking and directing for years, not just 36 hours. My hat’s off to them; the process was smooth and enjoyable.

If you’re headed to the WDW parks soon to do a little park hopping, please let me know how your experience goes below. Happy hopping!