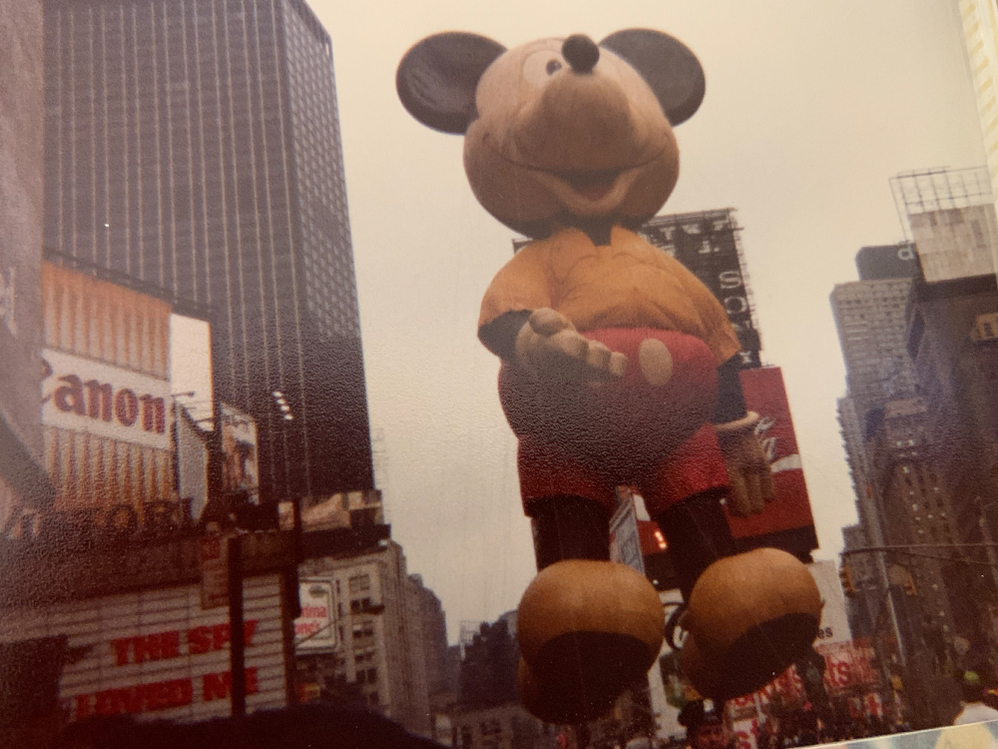 There is a song called “Alice’s Restaurant,” and it’s a tradition for some to listen to on Thanksgiving Day. It’s about Alice, and as American singer-songwriter Arlo Guthrie’s lyrics go, “about two Thanksgivings ago,” which, for you and me, would be 2019. For Arlo’s story, and our stories, that was a lifetime ago and a life-changing turning point. For “Alice’s Restaurant,” well, that’s just a tradition, but here we are now, together in 2021; let’s enjoy our present, our season, our moment in time.

Being Disney fans, we love a good parade. It’s a requirement. We’ve been missing gathering along the Disney park parade routes and waiting on the curb with our treats and snacks from the Main Street Confectionery for the parade to come around the corner. But we do have a great parade, now, in New York City.

While I grew up in New Jersey, my parents were born and raised (and are currently living) in New York City. Every year on Thanksgiving Day, my father would gather his three little girls super early (think 6am) and would head off to the Macy’s Thanksgiving Day Parade. My mother stayed home; she cooked for the day ahead and never liked the cold anyway. This was the second big traditional outing each year when my father was fully in charge of his three little girls (the other being our spring outing to Ringling Bros. and Barnum & Bailey’s Circus). This tradition lasted for decades and continues today in different forms.

It was freezing!!! In the early 1970’s through the 1980’s, I remember that November in New York back then was true “winter.” The parade was loud, it was cold, and there was so much to look at! We would wait hours for it to begin. I remember my father having a hand-held, battery-operated radio to let us know when the parade began and we had to wait for it to come to our viewing spot. We weren’t with my Dad during the parade. He did the New York push technique. Literally, he pushed us to the front of the curb because we were so small so we could view it together while he stood in the back with the adults. Back then there were no barricades like they have now. And the marching bands would come; I remember the percussion sounds drumming from my stomach and the clowns shouting “Happy Thanksgiving.”

Disney and Macy’s parades have so much in common. They are like brother and sister, and they do a parade right. From the costumes to the music, to the floats, balloons, and performers; everything worked in unison to create a show and to tell a story. I didn’t even know until I was a young adult that Macy’s had an entire show for viewing at home, and that there were performances. We were always at the parade! Who knew?!

Disney has been represented in the Macy’s parade for decades, almost since its inception. Macy’s began their Christmas or Santa Claus Parade, as it was originally called, back in 1924. Disney began their relationship with Macy’s in 1934 when the first Mickey Mouse balloon debuted. Walt Disney himself had a hand in its creation. I remember (see picture below) watching the 1970’s Mickey Mouse balloon fly overhead in the streets of NYC. At the time, I was not a big fan because I wasn’t familiar with Disney and leaned more toward the Snoopy balloon. Snoopy and the Sesame Street floats were my top two favorites (why Disney doesn’t own the Snoopy IP I will never understand), but it was Kermit that I was mesmerized by.

The Kermit the Frog balloon at the Macy’s Thanksgiving Day Parade every year, in person, was enormous. From 1977 to 1982 (putting me at 6 to 10 years old) Kermit flew, and I remember him vividly cruising every year in front of me because he was always a bit dilapidated. One arm was deflated, or his foot would scrape against the New York City streets. That was my favorite part: the messy, broken balloons. They would fall so close to the ground and have to be dragged by the costumed handlers so you would get to be really close to them. For someone so small, I loved it when Kermit would be so close you that could touch him. Kermit and Spiderman would always be a bit wonky. Kids love when things go wrong in the best way!

As I got older, I remember Disney balloons coming and going through the decades. I didn’t quit “get” the Mickey Mouse cruise ship sailor balloon in the 2000’s because I wasn’t a fan. I loved the floats with the Disney characters on them. And, at times, Goofy or Donald would come and go. Buzz Lightyear was electric, but Chicken Little not so much.

Lately, my favorite has been Olaf, and since I’ve gotten older, I have been enjoying the Macy’s parade not in parade form but during balloon blowing time the night before Thanksgiving. Watching them blow up Olaf in person from the ground up has been more interesting to me as my children are now adults and join me for the parade blowing annual walk.

When I was young, I remember complaining that I was cold (sometimes it snowed or rained but we still went; it was tradition after all), and I was hungry, I was tired, and my feet hurt. But wouldn’t you know, I grew up and shared this tradition with my children. Times changed, we now have barricades, intense security, and we sit with chairs and blankets waiting at 6am (we got smarter staking out our spot). We endured November 2001 and did indeed go to our beloved parade, showing support for each other and watching the American flag march by us; we had no fear.

When the parade was finished, my Dad would would walk us back to our tiny Toyota, holding in our bladders for the ride home, shoes off, heat on and squished in the backseat, the NYC street smells dissipating as the smell of turkey waited for us at home. The worst part, because we were little was that my father had command of the radio. There were no CDs, no tapes, no built-in televisions, just our tiny 1970’s Toyota with him in charge of the radio. Here comes Alice…

Last year we didn’t get to go to the parade; we missed it, and we understand why. This year, when you and I watch the 95th Macy’s Thanksgiving Day Parade, whether we’re at home, or on the balloon inflation walk, or at the parade in person, it will be wonderful to welcome it back. A new appreciation again for Broadway’s return, children drumming their beat in marching bands and Disney showcasing their Baby Yoda (Grogu) as a new balloon along with a new Disney Cruise Line float with Jordan Fisher debuting a new song, “Together We Set Sail.”

Last year we all Zoomed and FaceTimed my dad and mom in New York City promptly at noon because we couldn’t be together and we played that crazy, bewildering song. But in 2020, we all gathered around our own homes and loved it. You can understand why. It wasn’t the song, it was the tradition.

Whether you’re in the Disney parks for Thanksgiving this year or home, what are your Thanksgiving traditions? If you could choose a Disney balloon to be in the parade, which character would it be?

Happy Thanksgiving to my wonderful DIS community, my extended family and friends. I am so grateful to all of you and appreciate that you read my articles, bring me into your homes, and love Disney with me.