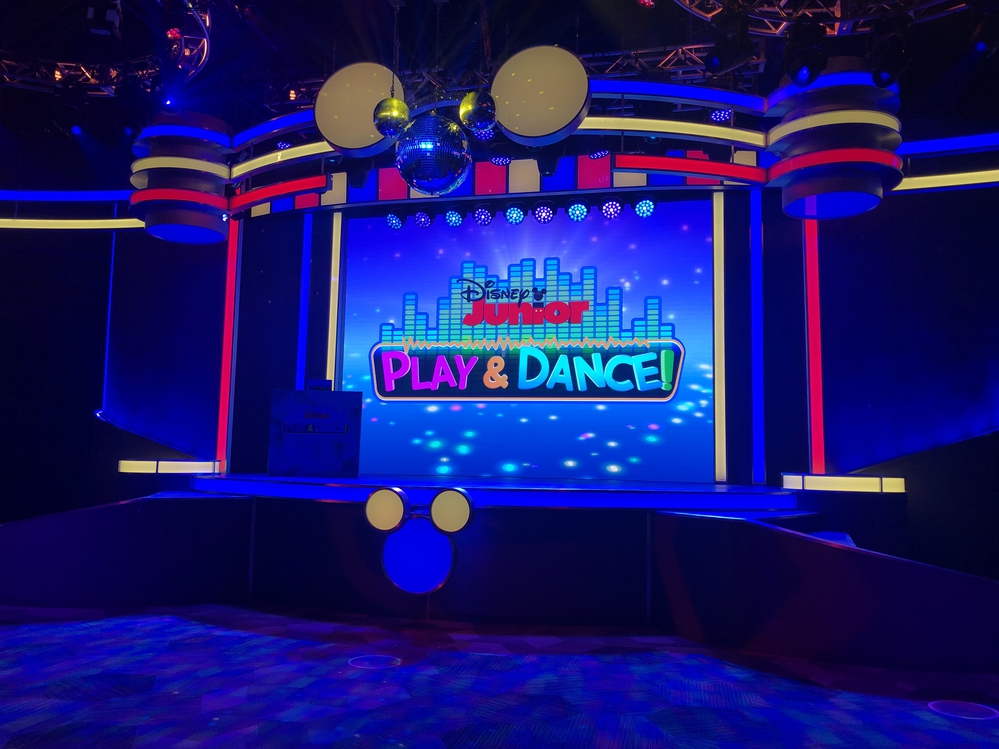 If you’ve visited Walt Disney World with a preschooler, you know that our little friends need space to get their wiggles out, even in the middle of the most magical place on Earth. Enter the newest iteration of Disney Junior Dance Party at Disney’s Hollywood Studios.

Since the reopening of the park, the Disney Junior entertainment option has looked just a bit different than before. The show is now called Disney Junior Play & Dance, and the modified show is roughly 10 minutes in length, which is much shorter than the former version of the attraction. The characters remain on the stage rather than stepping into the crowd, but the preschoolers in attendance when I was there didn’t seem to mind at all. Let’s take a peek at the space and the experience.

With new physical distancing measures in place, when a party reaches the door, a cast member will ask how many people are in the party, and another cast member will show that party to a spot on the floor.

As we’ve seen in other areas around Disney World property, groups are asked to stand around that spot on the floor. Here at Disney Junior Play & Dance, that spot is called a Party Zone.

Groups are physically distanced throughout the large room, and little ones have plenty of space to dance and wiggle their way through the show, while maintaining their distance from others not in their group. As is currently the case throughout Walt Disney World property, guests age 2 and over must wear a mask while at Disney Junior Play & Dance.

A DJ serves as the host for the dance party, and leads the children in various dances throughout the experience. And, of course, grown ups in attendance are welcome to dance right along. Let the record show that I danced and jumped and participated like a good audience member. And I loved it.

Early on in the dance party, bubbles drop from the ceiling. There are plenty of bubbles to go around, and at no point during the performance did I see kiddos where they weren’t supposed to be. Everyone enjoyed the bubbles, music, and movement while remaining physically distant.

For those of you who have attended this entertainment option before, let me put your worries to rest: the four Disney Junior characters who used to be highlighted in the show still take the stage. Something to keep in mind is that the characters (and the DJ) are onstage for a much shorter time than before, and they do not step into the audience at any point.

Vampirina is the first Disney Junior friend to appear, and she taught the audience a dance move that’s uniquely hers. In fact, each character takes turns quickly teaching the kids a dance move and then briefly leads the dance as everyone follows along.

Doc McStuffins was next to take the stage, and she taught us her exercise-inspired dance move. In between character appearances, the DJ plays high energy music and keeps everyone moving and grooving.

Representing Disney Junior’s The Lion Guard, Timon was next to take the stage. He taught everyone a fun Circle of Life-inspired dance move or two.

No offense to the other three Play & Dance characters, but the last character was my favorite: Roadster Mickey! If you’re a big fan of the Big Cheese, I highly recommend experiencing Disney Junior Play & Dance just to be able to see Mickey in his Roadster Racers costume. He is the cutest thing, and the time he spends onstage teaching the audience his dance move is completely endearing.

During the dance party’s finale, all four characters return to the stage and strike four special poses for the audience. The DJ announces that the special poses are coming up so that parents can get ready to take pictures, and if they’re quick (and prepared), they can ask their kiddos to stand facing the audience for a fast distanced selfie with the characters in the background.

If you’re going to be in Hollywood Studios in the near future, and you have a little one who needs to move a bit before waiting in another attraction queue, I highly recommend checking out Disney Junior Play & Dance. The cast members did a great job of ensuring that the new safety measures were adhered to, and the party itself provides a bit of good old-fashioned fun for everyone.

The Disney Junior characters are not currently meeting and greeting in their normal locations just outside of the dance party theater, but guests are allowed to pop in and out of the themed spaces for special pictures of their own.

Don’t forget that your little ones can also see their favorite Disney Junior characters in Hollywood Studios’ Disney Junior Stars Motorcade. The motorcade currently takes place at 11:30am and 5:45pm. And, you’re really lucky, the motorcade might just be pulling through the park as you exit the Disney Junior Play & Dance theater. How fun!

Have you stopped by the new Play & Dance? What do you think of the changes and the modified experience?