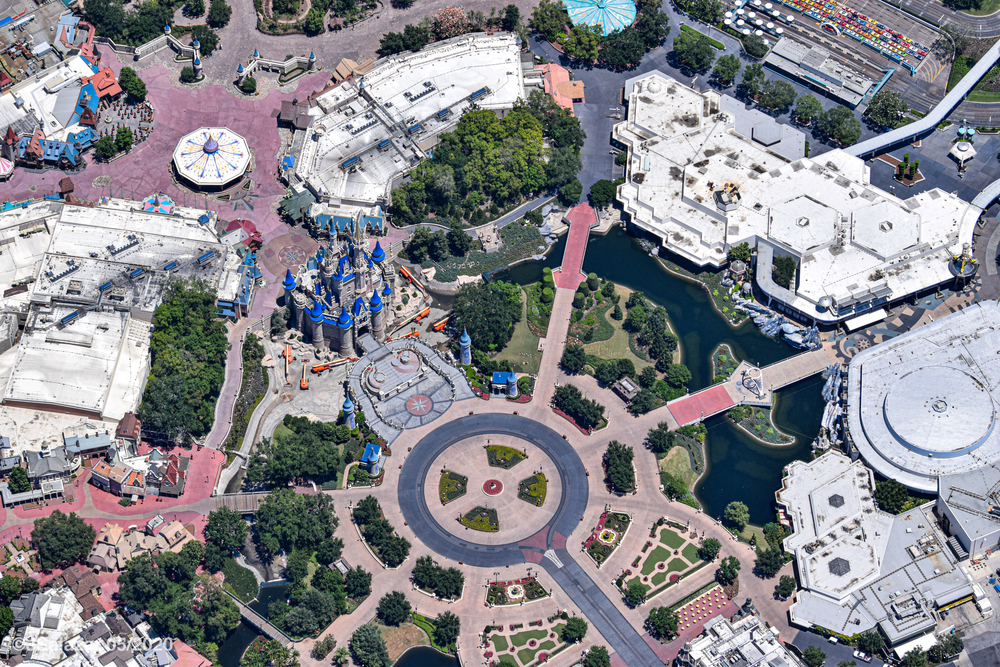 Work on the current construction projects on Walt Disney World property has been halted during the temporary closure. Thankfully, we’ve been treated to some amazing aerial pictures of the parks taken during the closure, and we can now take a closer look at the progress that has been made.

In her column earlier in the week, Jackie shared her thoughts on some of the Magic Kingdom pictures that show a completely empty park. Today, we’ll focus in on five specific areas of WDW construction and/or refurbishment: Cinderella Castle, TRON Lightcycle attraction, the Transportation and Ticket Center, Star Wars: Galactic Starcruiser, and Epcot‘s Future World.

The Magic Kingdom’s centerpiece, Cinderella Castle, is receiving a makeover. 2020 marks the 70th anniversary of the debut of Cinderella, and the lead character’s castle is in the middle of getting a facelift.

The rich blue reminds me of the hue that was used during the refurbishment of Sleeping Beauty Castle in Disneyland. In my opinion, the deeper hue will help the castle’s turrets stand out against the blue sky.

The construction lifts are still present, but are down as they await the reopening of the park and the return to work. The castle moat closest to the castle has been emptied to accommodate the lifts.

Heading over to Tomorrowland, we get to take a look at the construction process of the TRON attraction. It’s fascinating to take in the scope and size of this massive upcoming Magic Kingdom ride.

The construction began with the indoor track (now enclosed), and has continued with the outdoor leg of the track. Construction of the attraction was slated to be completed by Walt Disney World’s 50th anniversary in 2021. We’ll need to wait and see if the temporary closure will impact the completion schedule.

Over the course of several months preceding the closure, the Transportation and Ticket Center underwent a refurbishment.

During the refurb, the parking lot trams dropped guests off much further away from the security bag check areas than before, and construction fences surrounded guests as they made their way to the bag check area.

Thanks to the picture above, we get a closer look at what appears to be a new and completed bag check area. A few dark green construction walls remain on the sides, but the area has more of a permanent look to it.

The new tram lanes and loop are in place, closer to the bag check areas.

The new Star Wars: Galactic Starcruiser (aka Star Wars hotel) is seen in the photo above. The Starcruiser is located off of Osceola Parkway near the original entrance (which has now been removed) to Disney’s Hollywood Studios, and just behind Star Wars: Galaxy’s Edge. It’s neat to see the artist’s renderings become a reality.

Taking a look at the aerial pictures of Epcot’s Future World, we get a look and feel for the vast scale of the construction. The southwest side of Innoventions is completely gone, as is the Fountain of Nations.

The Pin Traders stand has been removed, along with the sails that once extended over the plaza. Pin Traders is now located in the Camera Center near Spaceship Earth. Click here to read up on the changes planned for Future World.

Of course, the temporary closure of the Disney parks has us wondering what the ripple effects will be for the construction projects both already underway and not yet begun. We’ll have to wait and see in the days ahead what construction completion schedule changes, if any, will be made.