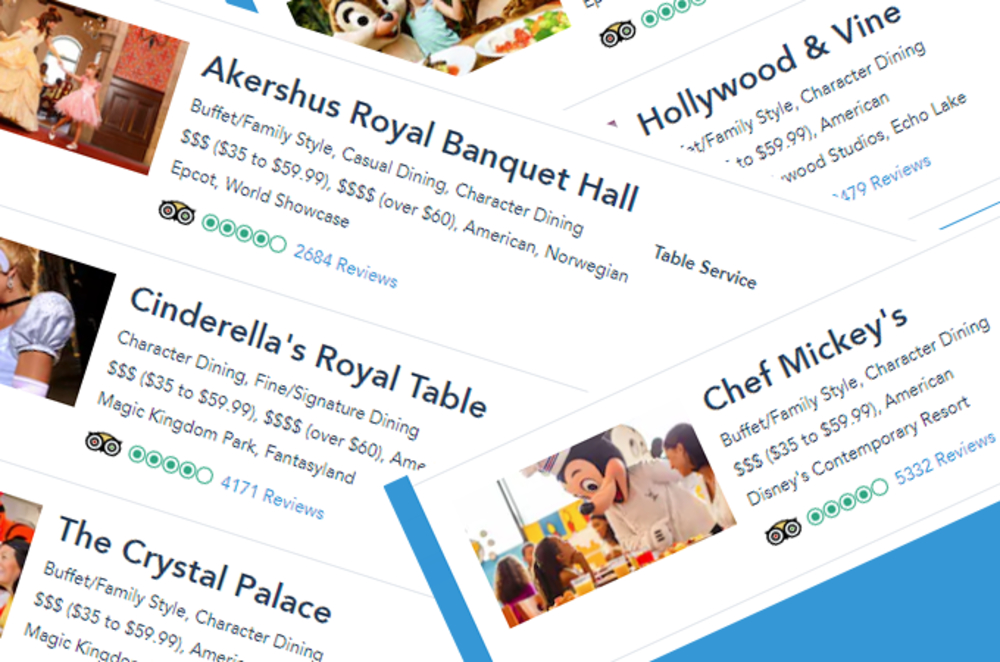 In August 2019, my family took a trip to Walt Disney World where we spent eight nights and nine days at the Port Orleans Riverside resort. We took advantage of the free dining offer, and, with a family of three that includes two daughters ages 6 and 1 and my 4 year old son (along with my mother and wife), we had a lot of decisions to make about where we were going to eat. If you’d like more details of the trip, you can read my trip report linked above. This article will focus on our experiences at six different character meals during the seven full days we were on property.

This article could be turned into a debate about the value of the Disney Dining Plan, but I’m not going to do that. Suffice it to say, if you want to come close to realizing the full value of the Dining Plan versus paying out of pocket, you need to do character meals. Our benchmark for value is based on the cost of the Disney Dining Plan’s face value of $282.43 per day for three adults and two kids. The cost of your average dinner at a character meal comes close to that value.

In order, we visited the following restaurants:

The individual review articles for each restaurant are linked above so that you can read them. I would do so before continuing.

There are plenty of reasons why you would want to do this many character meals when you’re herding three rugrats around the parks. You’re guaranteed nearly two hours of air conditioning and a place to rest. If you’ve been running around the parks since 9 am, a 6pm reservation at The Crystal Palace seems like a great idea as it’ll allow you to take a break and ease into the evening of fireworks and a few more rides.

So, now you know my reasoning for setting these up, but the real question is “Am I crazy?” The answer: maybe.

Right off the bat, I want to say that I had an amazing time at each restaurant and felt like I got average to fantastic value out of each experience. My children loved every single place, which I guess is what really counts at the end of the day. There are few things that I would do differently and I’d like to share those with you if you’re ever thinking of running this kind of gauntlet.

Don’t line up The Crystal Palace, Hollywood and Vine and Chef Mickey’s Buffet all in a row. All the food in these three restaurants are very generic and very heavy or filling. By the end of the second meal, you may risk losing your taste buds. Places like Akershus Royal Banquet Hall, Tusker House Restaurant, and Cinderella’s Royal Table offer high quality and different kinds of food. Luckily, in between the 5th and 6th restaurant, we did only quick service food and got a break.

People say the Disney Dining Plan offers way too much food. This is true. These are all buffets (with the exception of Cinderella’s Royal Table), so you can load up on food if you want to. View these experiences as half character meet and greets and not a way to maximize your food intake. 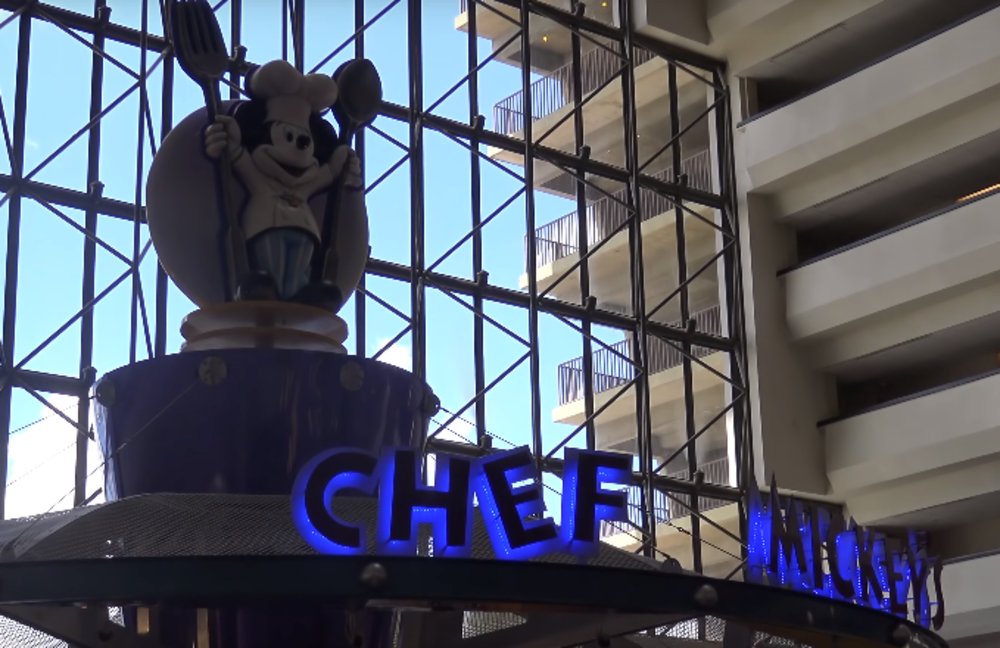 Each one of these character meals offered something different, and, when you compare all of them inside a small window of a single week rather than over the years, it becomes apparent what the pros and cons are of each.

These are some of my hot takes:

Cinderella’s Royal Table is an amazing and unique experience, but, for the price point, it’s not really worth repeating. Skip it if you’ve been within the last few years.

The Hollywood and Vine isn’t worth going at all unless you have some extra table service credits or cash rolling around. Ending up here is probably the result of poor planning or last minute decisions (like me).

Akershus Royal Banquet Hall is really good all around.

Chef Mickey’s Buffet is a great place to go in the middle of the day and take a break from the Magic Kingdom.

Let’s take a look at some scoring and compare the reviews:

A few things to consider on how I scored each of these restaurants: I scored them in context of each other in a vacuum. I am not grading them compared to any other restaurant, because, obviously Cinderella’s Royal Table is not 10 out of 10 when compared to every other restaurant on property. Also, a score of 5 is borderline mediocre and brings nothing special to the table. Anything less would be an experience where I felt robbed or cheated of my time and money.

Location scores are based on both the theming of the restaurant and where it’s physically located. If the restaurant is located in an interesting place with good views, it receives a higher score. 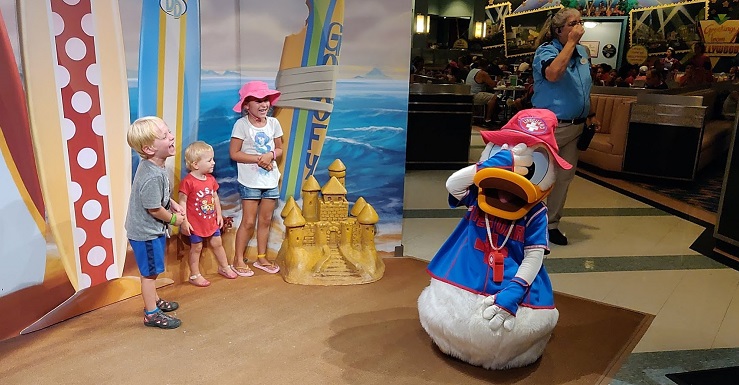 The food scores should be self explanatory, and are all based on quality of food and selection at that establishment. Cinderella’s again comes out on top as it is a signature dining restaurant, but Akershus is a close second along with Tusker House.

Akershus’ dining experience is more satisfying with its appetizer buffet that comes along with an entree and desert. Tusker House scores high based on its quality and selection of offerings that is different than anything else on property.

It’s very difficult to differentiate between character entertainment as they all do a wonderful job and are nearly identical. Any dings I gave the scores was based on time at the table and whether or not the restaurant characters performed a little parade or extra engagement with the room.

Chef Mickey’s Buffet came out on the bottom of the list only because the characters seemed rushed that day. Overall, each restaurant offered a similar experience.

Service is subjective for the most part, but overall grades were given to how rushed I felt (I didn’t feel rushed anywhere), whether the server was attentive, and the server’s attitude. All of the restaurants offered a pleasant experience with excellent support staff.

Restaurants that were strictly buffets had a ceiling due to it not being full service meals. The only restaurant that had a negative against it was Chef Mickey’s Buffet.

Value for your Money

It all comes down to whether or not the experience was worth the money (or dining plan credits) that you paid for it. Being on the Disney Dining Plan gives me a biased opinion of value since the meals were already paid for, so signing a $350 bill for Cinderella’s Royal Table didn’t really hurt as much.

That being said, you can see a few scores that stand out. Cinderella’s Royal Table, as a signature restaurant, doesn’t really offer the value of money at the price point that is being presented. At two table service credits, the food wasn’t as varied and the experience wasn’t as different as something like Akershus Royal Banquet Hall, whose experience was incredibly similar. The only main difference was obviously sitting a few stories up in the castle.

Tusker House Restaurant also scored high based on the different kinds of food that you will find inside compared to the standard-type fare you find in places like Chef Mickey’s Buffet and The Crystal Palace.

If you’re on the Disney Dining Plan and have the park tickets to access all of these restaurants and kids in your traveling party, then I would totally recommend hitting up a character meal each day. I’d be careful of overeating, which is easy to do, but the experience of having Disney characters roaming around while you eat is nothing short of amazing with young kids. Doing it every day adds an extra magical experience if you can keep your sanity.

Personally, it’s the only way to keep your sanity because you can at least have a meal where the kids are engaged with characters and you can have an adult conversation without them interrupting every single second.

The scores speak for themselves, and if you’re reading this article before reading the individual reviews, I suggest to click on them above for more in-depth detail.