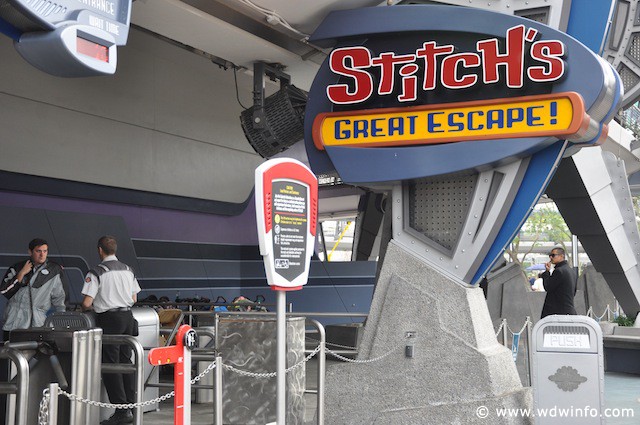 By now, you have probably heard that Disney has confirmed they are closing select attractions and shows at Walt Disney World, including Primeval Whirl, Rivers of Light, and Stitch’s Great Escape. This led me to start wondering what Disney would do with these spaces. I have been thinking specifically about what should replace Stitch’s Great Escape.

Tomorrowland has some of my favorite attractions at the Magic Kingdom, such as Space Mountain and the Peoplemover. What could they add to make one of my favorite lands even more spectacular? I’ve come up with some possibilities. Disney has a few options for what type of experience they could place in Tomorrowland including a character meet and greet location, a restaurant, an attraction or a show.

When it wasn’t operating, Stitch’s Great Escape would become a character meeting area named Stitch’s Alien Encounter Character Greeting. This means that Disney could decide to replace this attraction with a character meet and greet location permanently. If this is the route they take, I would like to see a character meet with Zenon Girl of the 21st Century. She could share her out of this world style and geek out over Proto Zoa while singing “Super Nova Girl”. How stellar would that be?

Or what if we could meet Baymax here? He had been meeting in Epcot, but wouldn’t it be more appropriate to let him know you are satisfied with your care in Tomorrowland? I don’t know about you, but I could use a big Baymax hug right about now. As much as I love seeing the characters, this is my least favorite option for how to utilize this space. As a lover of food, especially Disney food, I am interested in a new restaurant.

Tomorrowland has a quick service restaurant and a few snack options, but they need a table service restaurant or a second quick service restaurant. Sonny Eclipse could use some help keeping the guests entertained at mealtime. Disney could replace Stitch’s Great Escape with The Lucky Cat Café from Big Hero 6. This San Fransokyo eatery would be the perfect place to grab a quick themed bite to eat. They could have assorted donuts for breakfast, featuring a Mochi donut option, and sandwiches and soups for lunch.

For a table service option, Disney World could add a restaurant themed after the live-action Tomorrowland movie. The Imagineers could create a unique place to eat with the sleek architecture seen in the film. They could even make the entrance to the restaurant out of the pin that transports you to Tomorrowland in the movie. Once you touched it, you would be able to access the dining area. These are just a couple of options for places to eat, but Stitch’s Great Escape could also be replaced by another attraction or show.

As a ride enthusiast, I am always looking forward to experiencing new rides at Walt Disney World. I would be elated for a new attraction or show to pop up in Tomorrowland. I know we are already getting Tron, but there’s always room for one more. If Disney adds a show, I could see a Meet the Robinsons concept where guests go back in time to help Lewis stop Bowler Hat Guy from destroying the planet.

Or Disney could add a ride that takes you to outer space with Wall-E and Eve. Your directive could be to find signs of life on a planet full of waste. I imagine it as a 3D simulator attraction similar to Star Tours or Flight of Passage. Another attraction they could replace Stitch’s Great Escape with is a Bot Battling attraction from Big Hero 6. Guests could design their own bot with the help of Hiro, and then battle their friends or family for the title of the Ultimate Bot Battling Champion.

So, What Should Replace Stitch’s Great Escape?

There is a multitude of wonderful options to add in Tomorrowland. I can only dream of what the Imagineers could come up with. Hopefully, Disney is able to budget money toward replacing these attractions and shows in the near future. What do you think should replace Stitch’s Great Escape? Of all the options I named, my favorite addition to Tomorrowland would be a Big Hero 6-themed ride or restaurant.