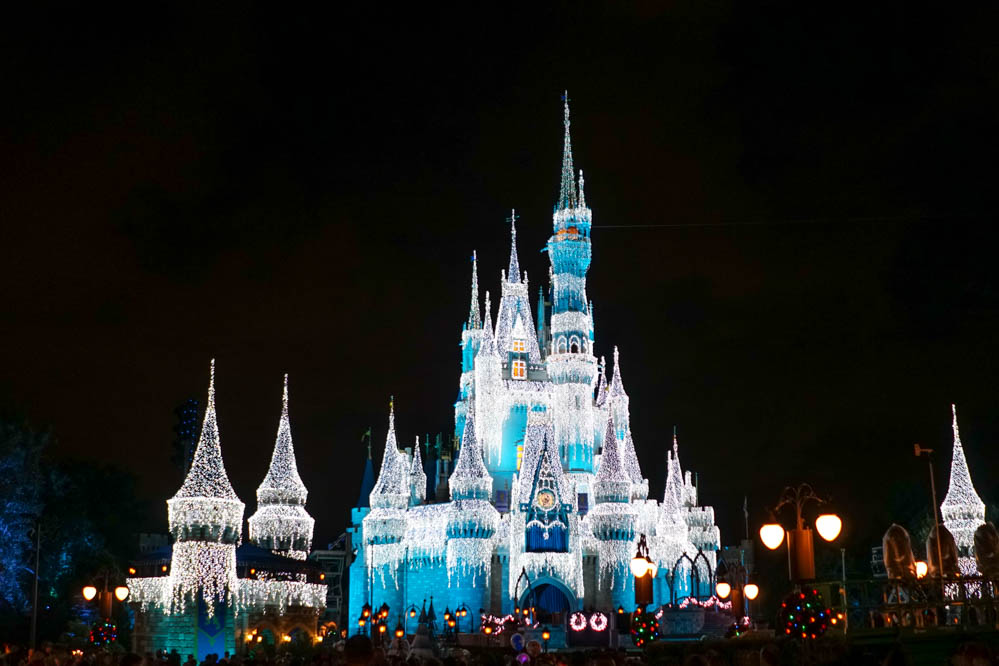 ShareTweetSubscribe
For my family, our Disney vacation doesn’t truly begin until we go to Magic Kingdom. There’s just something about entering the park, turning onto Main Street, and getting our first look at Cinderella Castle. It doesn’t get old — no matter how many times we’ve done it. Magic Kingdom becomes even more magical during the holiday season. Main Street is lined with Mickey-shaped wreaths, Cinderella Castle is adorned with icicle-style lights, and there are plenty of activities and entertainment during Mickey’s Very Merry Christmas Party and throughout Christmas week 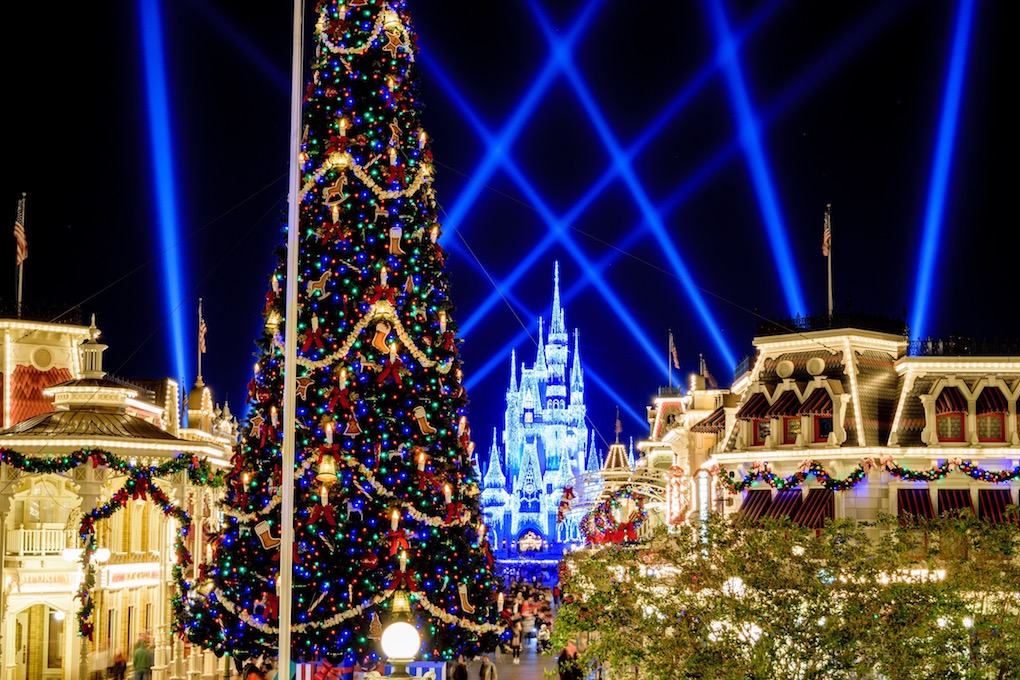 To ensure an enjoyable experience, Disney closes its parks in phases as it reaches capacity, restricting admission to more and more guests with each phase. On-site guests are at the biggest advantage, as a park would have to reach a Phase 4 closure in order for all guests to be turned away; off-site guests holding a one-day, single-park ticket are at the biggest disadvantage, as they will be the first to be turned away. Disney rarely ever hits a Phase 4 closure, even at Magic Kingdom. As the most-popular park, in one of the most-in-demand vacation destinations in the world, during the most crowded time of the year, Magic Kingdom gets pretty crowded during Christmas week. Because Magic Kingdom is the smallest of the four parks, it doesn’t absorb crowds quite as well as Epcot or Animal Kingdom. As a result, it may appear more crowded than it actually is, as there will be many congested areas in and around the park, and higher-than-usual wait times for popular rides and attractions. 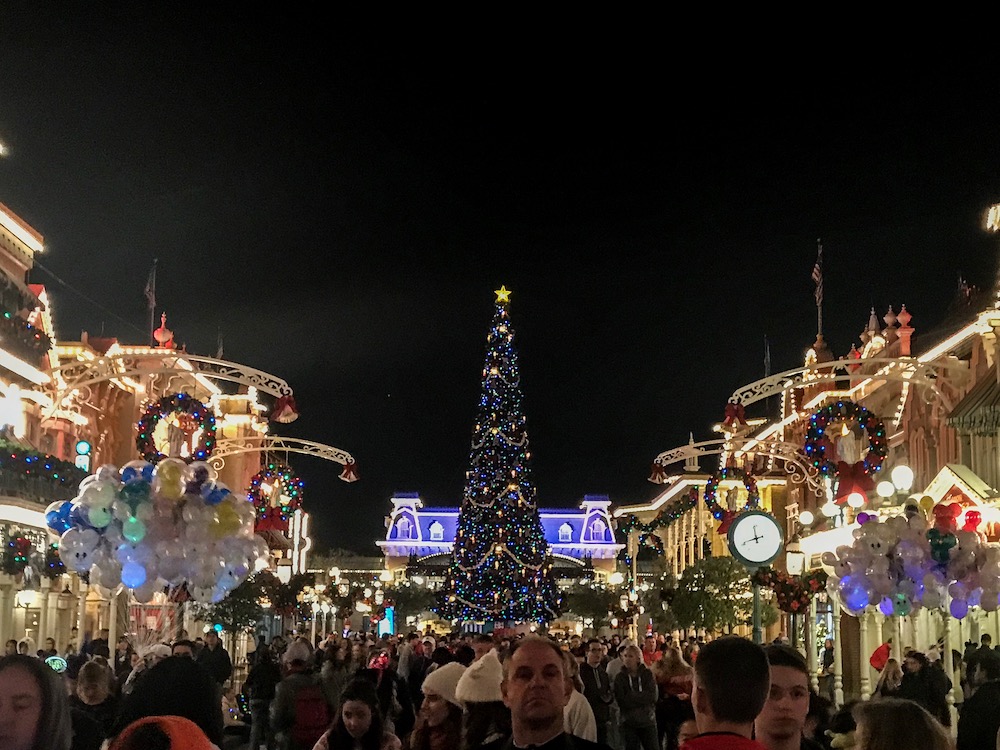 Magic Kingdom will see the highest crowds on Christmas Day and New Year’s Eve. Surprisingly, it usually gets pretty crowded on December 27th or 28th as well. I believe this is because a lot of guests check in on for their New Year’s trip, and many runners will make it the first park they go to.

Jingle Cruise – The beloved Jungle Cruise gets a massive holiday makeover with tons of kitschy decorations and pun-filled holiday-themed jokes during the holiday season. Since 2013, Jungle Cruise has been re-themed for the holidays, getting a new storyline, new decor, and even a few new jokes. The homesick skippers have decorated the boathouse with whatever they can find to get them through the holidays. The boats have been re-named and a special holiday broadcast can be heard over the radio. While most activities and entertainment are exclusive to Mickey’s Very Merry Christmas Party, Magic Kingdom extends much of its entertainment through the week of Christmas. This entertainment includes: A Frozen Holiday Wish – Anna and Elsa lead a celebration on the Castle Forecourt stage (at the front of Cinderella Castle) nightly during the holiday season (and during Mickey’s Very Merry Christmas Party). Featuring special appearances by Kristoff and Olaf, this merry-and-bright seasonal show culminates with Queen Elsa using her special powers to transform Cinderella Castle into a glimmering ice palace for the holidays. Holiday Wishes — As of now, Holiday Wishes is scheduled to run throughout the week of Christmas. The holiday version of the now-defunct Wishes fireworks normally shows during Mickey’s Very Merry Christmas Party. Up until last year, the show extended into normal park hours during Christmas week, however, the show was replaced by Happily Ever After last year. Mickey’s Once Upon a Christmastime Parade – The parade, which headlines Mickey’s Very Merry Christmas Party, will replace the Festival of Fantasy Parade during afternoons throughout the Christmas week. The show will take place most afternoons at 12:00pm and/or 3:30pm, starting December 22nd. Mickey’s Most Merriest Celebration — The holiday show takes place on the Forecourt Stage in front of Cinderella Castle. As part of Mickey’s Very Merry Christmas Party, it features plenty of Disney and holiday-themed music, dancing, and more.

I may be a bit biased, but I consider Holiday Wishes a can’t-miss show at Magic Kingdom — and all of Walt Disney World, for that matter. Not only is it a unique spin on the beloved Wishes Fireworks Spectacular, but it’s an opportunity to see the holiday version of the now-defunct fireworks show. It certainly provides a bit of nostalgia for the Disney purist. 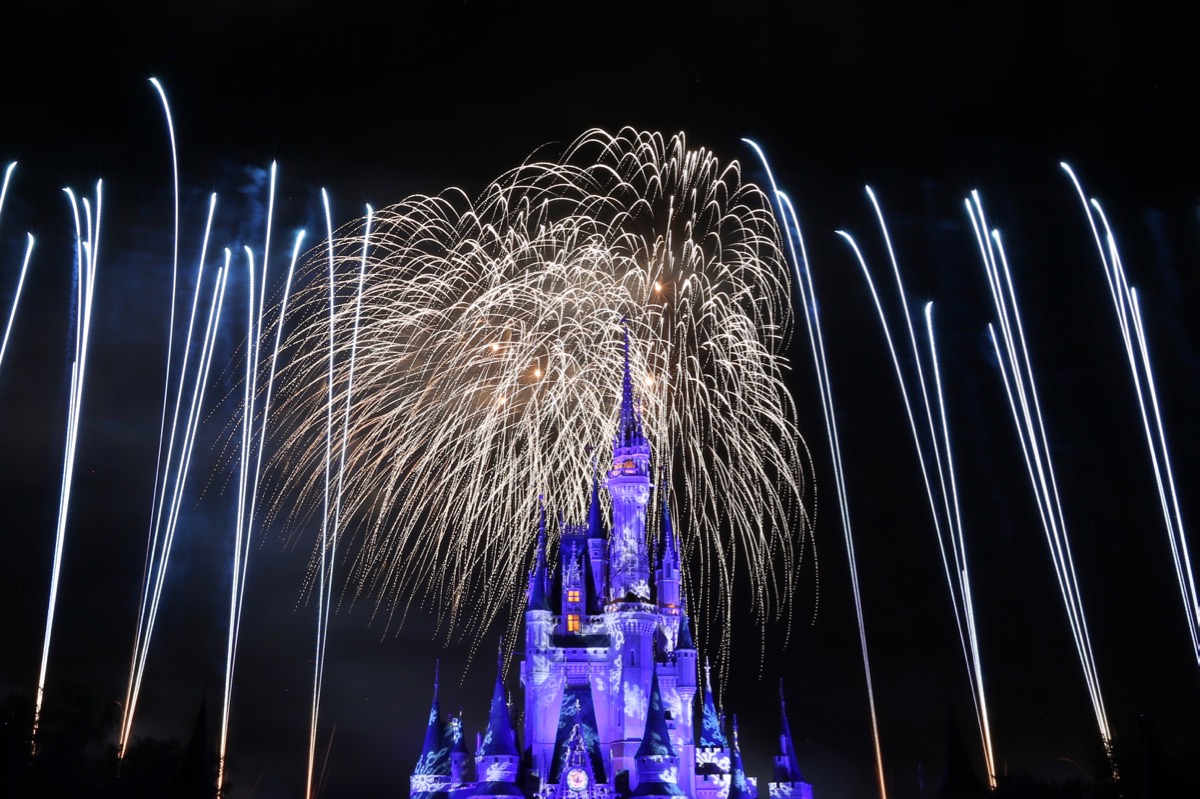 You can only see Mickey’s Once Upon a Christmastime Parade at Mickey’s Very Merry Christmas Party or during Christmas week. It’s not shown any other time. The parade takes the place of the Festival of the Fantasy Parade during Christmas week. While the Festival of the Fantasy is a fantastic show, there’s just something about Once Upon a Christmastime coming down Main Street that will really bring out your holiday spirit. We love seeing the parade on Christmas Day. Santa is the grand finale, which provides a little extra magic to the day.

Jingle Cruise is definitely a fun spin on the usual Jungle Cruise ride. The holiday makeover is a fun addition to the park and will certainly get you into the holiday spirit. Outside of the decorations and puns, the makeover doesn’t stray too far from the everyday ride, so I’m hesitant to label it as a “Don’t Miss It.” If time permits or you’re able to get a FastPass+, then I’d definitely recommend it, but you shouldn’t be heartbroken if you miss it. Similar to when they’d “flip the switch” for the Osborne Lights at Hollywood Studios, Elsa “freezing” the castle during the Frozen Holiday Wish is a great way to kick off the evening and provides a backstory behind the bedazzled castle. Introduced during Frozen’s boom in popularity, the show is a fun addition if you can see it, but not worth changing your plans over. Mickey’s Most Merriest Celebration is a “cute” show, as my mother would put it. It’s cheesy in the best possible way, but it also features many characters you don’t normally see in and around the parks. Normally shown during the Very Merry Christmas Party, the show runs throughout Christmas week. I’d definitely check it out if time permits.

Arrive early. Take or leave this advice. We’re not morning people, but we make the “sacrifice” of going early. It’s the best way to get in a few rides and attractions before the masses arrive. Stay late. Again, it’s all going to depend on how you vacation. Disney will often add late-night Extra Magic Hours. On top of this, many one-day guests and younger families head toward the exit after the fireworks, leaving rides like Winnie the Pooh and Peter Pan with a much lower wait time than earlier. Line up for parades around 1-1.5 hours in advance and avoid Main Street. Our favorite spot to watch the parade is from Frontierland, where the parade originates. Use stores and the park’s layout to your advantage when walking around. The Emporium store spans the length of Main Street and is a great way to bypass the crowds. Enter the store in Town Square and exit at Casey’s Corner during parades or when Main Street is crowded. Disney will often open backstage areas as well, to alleviate crowds. Take a break in the afternoon. The park gets the most crowded from 10 am until the fireworks. You don’t have to go all the way back to your resort, either. You can take a monorail tour around the Magic Kingdom area and check out the decorations, then find a quiet spot to sit for a while. Go against the grain. When everyone runs toward Fantasyland, start your day at Tomorrowland or Adventureland. Line up for the fireworks around one hour in advance. Holiday Wishes is currently scheduled for Christmas week. It doesn’t feature as many projections, like Happily Ever After, and is viewable throughout the park. If Main Street or the Hub is too crowded, try someplace behind the castle.
ShareTweetSubscribe