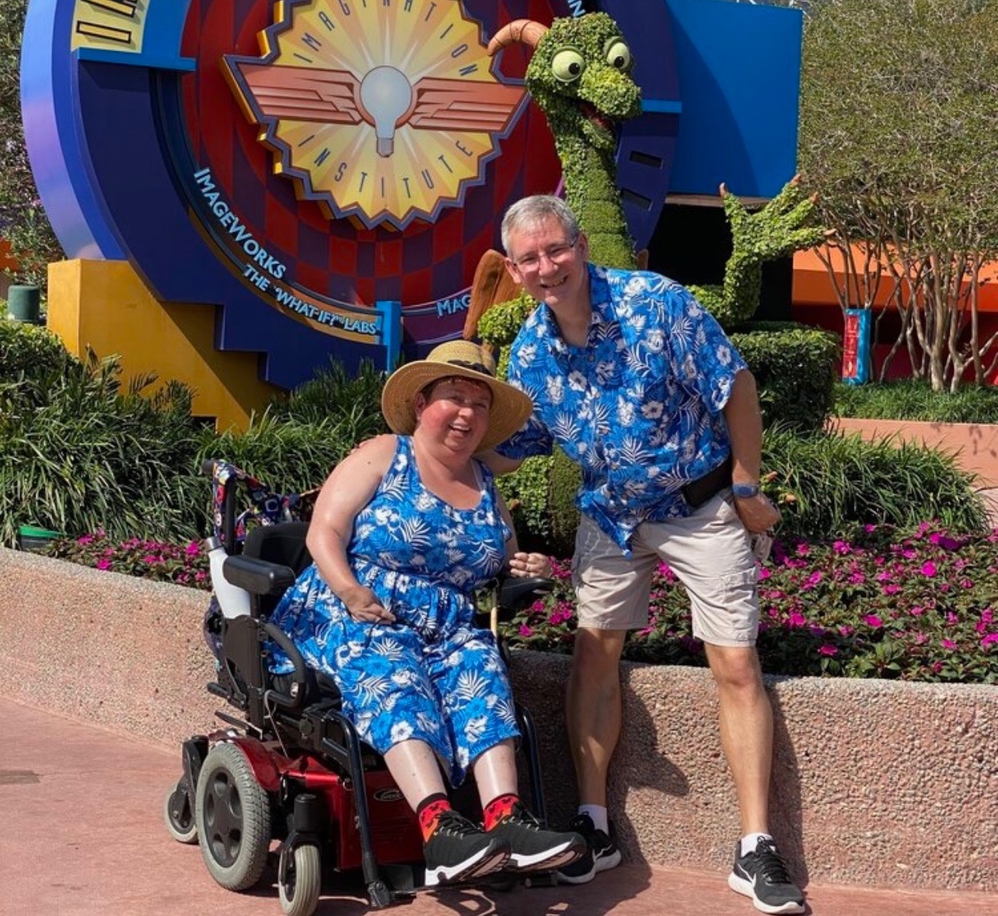 One of the things that has surprised me to learn in recent years is that some of the Walt Disney World attractions that I struggle most with accessibility due to my wheelchair and physical disabilities, are not the older classic attractions but ones built in the late 90s or even in the last few years.

In my previous article I wrote about accessibility problems with classic Disney World attractions. I included Test Track as this is a perennial favorite, but only realized after the fact that it was built in 1999. This is nine years after the Americans with Disabilities Act was signed into law, but also decades after a budding awareness of accessibility needs. It surprised me that such an accessibility-challenged attraction was built that late. However, further research revealed several more.

Even worse, some of the recent (and fantastic) new attractions in a few of the parks have some serious accessibility challenges. It’s disappointing that accessibility was either not well-considered or was a late-in-the-game concern resulting in poor access.

Below I highlight these newer accessibility issues, starting with some guest favorites built in the late 90s.

I’m a coaster lover and Rock ‘n’ Roller Coaster is a favorite, but it is a very difficult transfer. It requires either the ability to step down low into the vehicle or using a transfer step. However, even with this added step the transfer is low and requires a significant lift to get back into my wheelchair. Once in the ride vehicle I feel comfortable and secure, but the difficulty of the transfer means this one isn’t feasible for a significant number of people with mobility disabilities.

I’ve never been on the Kali River Rapids attraction and the primary reason is that although it is described as “must transfer” in the accessibility guidance from Disney, the information is wrong. It’s not merely a transfer ride, but instead requires the guest be able to step down several steps. In “disability lingo,” which is what those of us with disabilities read those descriptions for, transferring would mean being able to slide from a wheelchair onto a vehicle seat, which is not possible the way this vehicle is currently designed. I’ve read on forums online that there is some kind of ramp that a person with a disability could slide down to enter. This sounds just a little too Wiley Coyote-ish for my comfort. Plus, defying gravity to slide back up might be a bridge too far for many. Like Rock ‘n’ Roller Coaster, this attraction was opened in 1999 and didn’t seem to have much consideration of mobility disabilities.

DINOSAUR is a favorite of both my husband and myself, but unfortunately in recent years the lift required from my wheelchair into the vehicle has gotten to be too much to summit. Even at the special boarding area, getting in requires stepping up two big steps or a huge lift. Previously I had enough strength to push off with my legs and my husband would swivel me up. But my disease has progressed and this has become too physically challenging. With the height of the vehicle, I’m not sure what could be done except for the possibility of installing a raised platform. My husband says he can think of a way a transfer alteration would be possible in the accessibility boarding area, which just indicates that consulting with people with an engineering mentality and some knowledge of accessibility needs could go a long way for improving accessibility.

To my great disappointment, this newer attraction (Na’vi River Journey) as part of Pandora in Animal Kingdom is challenging to board. It is a beautiful and relaxing boat ride, yet it requires a big step down instead of a smooth transfer to get into the vehicle. An add-on step transfer bench is available so we use that to lift me down and up step by step, but it takes a lot out of me. If the seat had a hydraulic lift or add-on to that effect that I could transfer over and lower, it would be so much swifter and easier. On our first visit to this ride, we were amazed and appalled that it was made so difficult for the many people with mobility disabilities who would otherwise greatly enjoy the experience. With practice we improved our skills at this complex transfer, but I don’t really think that should have been necessary. There is a boat on Small World, which was built roughly a kazillion years ago, that can accommodate a wheelchair, but somehow on this brand-new ride they couldn’t figure it out (note: this was my husband interjecting again).

I so looked forward to riding Seven Dwarfs Mine Train before it opened, but every time I ride it I know I will experience pain during the transfer and during the experience. While the attraction is so cool and incredibly detailed to reflect a favorite Disney film, the vehicle design didn’t seem to consider people with mobility disabilities. The last car has a side door that opens, but a rider with mobility issues still has to step down or be lifted down to the seat. In my case, my husband helps me sit and then the fun begins—cramming my short, but not flexible legs into the vehicle. I actually have to slide over to his seat, put my legs in as best I can into my seat area, then slide back over before pulling the secure bar down. No matter how I sit my right leg is in pain because it just doesn’t bend enough. This pain is the only reason I’m glad it’s a pretty swift and short ride. Still, I stiffen up and then have difficulty getting back out. As much as I love this attraction, I can only muster one visit during a 10-day trip because I know the difficulty and pain I will experience. It’s such a disappointment in a ride that is so new and in comparison to other Disney World coasters that have easier transfers and still bring the fun (talking about you Expedition Everest and Slinky Dog Dash!).

I absolutely adore Mickey & Minnie’s Runaway Railway, but am heartbroken that, as a brand-new one just opened in 2020, it is so hard to transfer. Boarding requires stepping down or using a transfer step bench, but there’s very little room for maneuvering and would be so much simpler if it had a side door that opened. Even better, would be for the vehicle level to be in better alignment with wheelchair height so that if a side door opened you could have an easy slide transfer. It perplexes me that this wasn’t planned or thought about for a brand-new ride that is very family-friendly and an all around delight. I’d love it if on all new attractions the height of the seat in the vehicle was in alignment (or close range) of average wheelchair height. This is easy to know as wheelchairs generally fall into a range for standard height and should be easy to plan with the design.

As a coaster lover, I am so looking forward to the arrival of TRON to Magic Kingdom and Guardians of the Galaxy: Cosmic Rewind to EPCOT. I love all these films, their visual designs, and coasters in general; they both sound so cool, original, and fun. But I am anxious, terribly anxious, that I will be disappointed by two new and inaccessible attractions. For example, I’ve looked at the TRON vehicle design used in the Shanghai Resort and don’t think the original is accessible. (China is well known for not being accessible, interested in making things accessible, nor interested in inclusion of people with disabilities. So, I wouldn’t have many expectations of accessibility in these parks unless Disney insisted on it themselves.) The vehicles look like bikes, which isn’t itself a problem as Disney made a similar ride vehicle accessible with Flight of Passage by providing a transfer wheelchair for boarding. However, if they run side by side as in the design and cannot be boarded from behind, this solution wouldn’t work. Additionally, if the rider has to bend down to grip the handlebars it would be a problem for people with inflexible backs and necks to see and enjoy the ride. My disability involves this issue, so I often compensate by bending as much as possible in other places where I can. I really hope that Disney Imagineers have enhanced TRON design with accessibility in mind. Additionally, while the early look I’ve seen for Cosmic Rewind vehicles appears to be accessible, I really hope it is in actuality and doesn’t disappoint.

Even more than classic Disney World attractions having accessibility problems, I’ve been startled and disappointed to experience so many issues with newer ones. It seems that either access wasn’t considered or was added-on at the last minute instead of being thought through from the beginning.

Accessibility really isn’t something that can be glued on at the end. The ramps that are afterthoughts are always misplaced or inadequate. Whereas when accessibility is baked in from the start you end up with beautiful and seamless solutions, such as the ramp that winds up every level of the Guggenheim Museum.

My hope is that moving forward Disney will hire Imagineers with disabilities or consult with guests with disabilities (even better: let’s do both!) to weave in accessibility from the beginning and throughout every phase of design, development, and construction for new attractions. In an era where design and technology are advanced, there’s no longer any reason for accessibility to be an afterthought nor a challenge for creating and enjoying an incredible Disney experience. 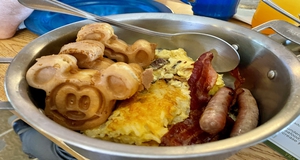