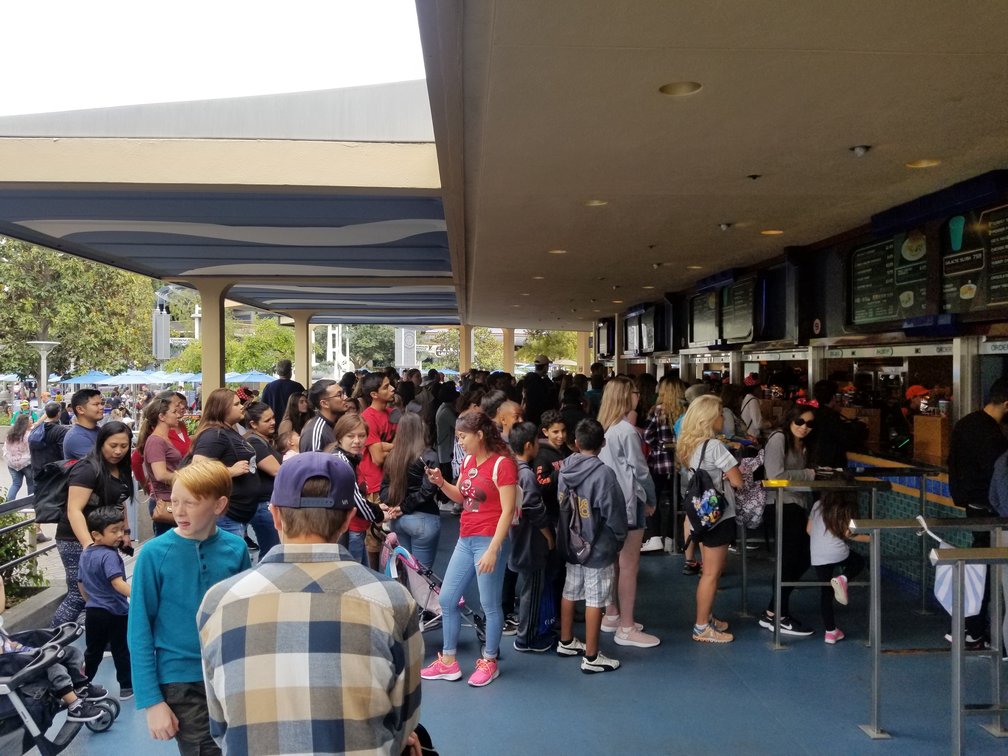 Disneyland has finally started to make a mobile food and beverage ordering service like the one at Walt Disney World available for Annual Passholders. I had the chance to try out the new feature on its second day of availability, and here are my thoughts:

I arrived at the Disneyland Park entrance at 1:45 PM on a Tuesday. The park was very busy. Before walking underneath the train tracks onto Main Street U.S.A., I opened the Disneyland App — which you will need to upgrade to access this service — and (not knowing at all how to use it) took a look. Its instructions were clear, giving options of eateries in both parks and an availability window of “Now” to about two hours from then.

I decided to place an order at Galactic Grill for a cheeseburger. It gave me an option for fries or yogurt; selecting the latter, it then gave me an option for selecting some minor adjustments. One of the selections was “No Sauce,” which I chose. After a gentle attempt at up-selling drink and snack items, I placed the order; my credit card on file was charged, and I walked under the train tracks down Main Street. No sooner did I reach the hub than I received a message that my order was ready and available at Window 2. I walked briskly towards Galactic Grill. The image at the top of this article shows you exactly what I avoided by using this app.

There were long lines at every window — except Window 2. It was the one window with NO line, and behind the counter was a woman with my burger and yogurt.

“Robert?” she asked as I arrived. “No, Peter,” I replied. She looked at the order and said “I’m sorry, I read it wrong.” It was, in fact, my order. I took it, opened the bun to remove the onions, and found sauce on it. I told her that I had requested no sauce. She apologized, spoke to the cooks, and in less than two minutes I received a new burger. I asked if I had done something wrong in ordering. “No, it was our fault,” was her reply. Later that day, hungry again (as one gets at Disneyland), I decided to try the Jolly Holiday Bakery Cafe. This time, I waited until I was closer. From in front of the Sleeping Beauty Castle, I ordered a roast beef sandwich with no sauce. I was a little dismayed to find that none of the pastry options were available. This time I notice that the app actually tells you the status of the order, from being prepared to being ready.

Within a couple of minutes it was, and I was told to proceed to the window marked “Mobile Ordering Pick Up.” Once inside, the section was clearly marked. There stood someone waiting for me with my order. I lifted the bun and…no sauce! My order went off without a hitch.

This is a fantastic new service — for now. I am wondering what will happen once everyone starts using it. Like FASTPASS, I fear that once it becomes more popular and used by everyone it might defeat its purpose. As far as the sauce mishap goes, I’m willing to chalk that up to a new system being implemented (and, of course, that is something that happens with fast food in and out of Disney Parks). I’d like to see an area where you could customize your order even further by writing specific notes, but the speed and convenience was undeniably great. My Annual Pass discount was applied automatically. A big thumbs-up for this new service.