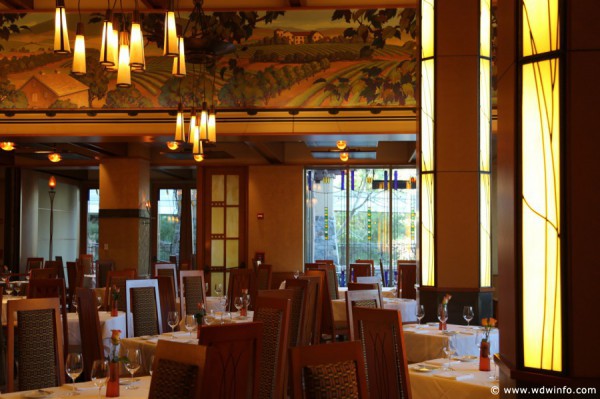 Arguably the premiere dining destination of the Disneyland Resort, Napa Rose was a must-do meal for my boyfriend Chris and I on our first trip out to the west coast parks together.

Something I really like about this spot is that it feels intimate and tucked away, while still sitting only steps from Disney California Adventure. You probably won’t encounter many patrons in Mickey ears or wily children running around, but that doesn’t mean you’re walking into an uppity establishment either.

With our reservation set for the last night of our vacation, we decided to dress up to make the night an occasion. We felt completely comfortable in our formal attire, but a non-existent dress code and fellow patrons sporting more casual ensembles made the atmosphere feel a bit more laid-back, in true So. Cal fashion. That’s exactly how I would describe Napa Rose – a sunny twist on a ritzy restaurant. While the Grand Californian’s lobby is rather rustic and warm, the decor in this restaurant is a notch brighter and more colorful. I would set the theme somewhere between Walt Disney World’s Artist Point at the Wilderness Lodge and California Grill at the Contemporary Resort, but minus the touristy mindset.

Our server for the evening was remarkably precise, timing each course perfectly and never breaking his smile while speaking. I don’t want to nitpick since he did a fantastic job, but there was definitely “Disney enthusiasm” missing that I might just chalk up to the elegant nature of the setting.

Rather than putting our sommelier server to the test (each one at Napa Rose knows their way around a wine cellar!), I decided to stick with water for the night, aside from a few sips from Chris’ drink: The Kate and Ella ($10), a nod to the daughters of John Rea, whom he named the nearby Katella Avenue for. As someone who generally hates the taste of alcohol, this cocktail actually wowed me with its mix of citrus and honey flavors. We started our feast off, as any meal should be, with an overflowing basket of bread. As we had been fasting in anticipation of this meal for a few hours, this was outstanding. The fluffy focaccia rolls were delightful paired with rosemary-topped butter, while the sourdough was scrumptious, and I found myself content with the crispy parmesan flatbread after only half a bite. Though I strongly campaigned for a cup of the Mushroom Bisque for our shared appetizer, eventually the Sustainable Pacific Blue Shrimp won out. Not for the faint of wallet, these three shellfish are basted in garlic butter and are served with cracked green olives, capers, and red fresno chili saffron nage for $18. Don’t get me wrong, this was a truly tasty dish, but if I wasn’t intending to spend for the special occasion, I’d scoff (loudly) at just how small it was.

Moving on to the main course, we were both delighted by our choices. I ordered the Fish Of The Day, the sea bass. I’m not the biggest fan of this particular fish, but I held onto hope it would arrive all Napa Rose-d up and somehow magically delicious because of the $42 price tag. I was not disappointed. This was definitely the best sea bass I have ever tasted, especially due to its accouterments like lobster relish, amarosa potatoes, lemon peel and tarragon nage. That being said, it wasn’t quite spectacular enough to tear me away from trying another dish if – I mean, when – I return.

On the other side of the table, Chris got the Grilled Petit Filet Mignon Of Beef Tenderloin ($50). I didn’t snag a photo of this one, but it came complemented with artichoke bottoms, salsify (similar to parsnip), brussels sprouts, sundried tomatoes, and orange. Arriving cooked medium, even though he ordered it medium-rare, he remarked that it still melted in his mouth and was the star of the course as the sides weren’t anything memorable.

Feeling thoroughly full, we went back to the menu with determination knowing there was no way we were walking out of this place without sampling dessert. We landed on two ($12 each), despite plans to stop by the Candy Palace on Main Street U.S.A. afterward for some specialty chocolate. The first was the Chocolate Truffle Hazelnut Crunch Cake topped with banana foster compote and accented by a dollop of vanilla ice cream on the other end of the plate. Typically, anything with caramelized bananas or hazelnut blows me away, but this was somehow only ok and paled in comparison to the sugary masterpiece right beside it. The Valrhona Chocolate And Salted Caramel Crèmeux was our winner. We weren’t exactly sure what this was, but the word “chocolate” sold it for us when we spied it on the menu. I would have been satisfied with just this, or maybe two orders of it since we kept squabbling over who got how many bites of its brown sugar pretzel streusel and dark chocolate stout ice cream.

Is your mouth watering yet? If you’re thinking of making a reservation of your own, I wouldn’t dare deter you.

Unless you’re on the lookout for a budget-friendly dining option, you’re sure to leave Napa Rose smiling. A worthy addition to any Disney fanatic’s bucket list, it offers among the best food, service, and atmosphere of any restaurant I’ve dined at inside or out of the Disney bubble.