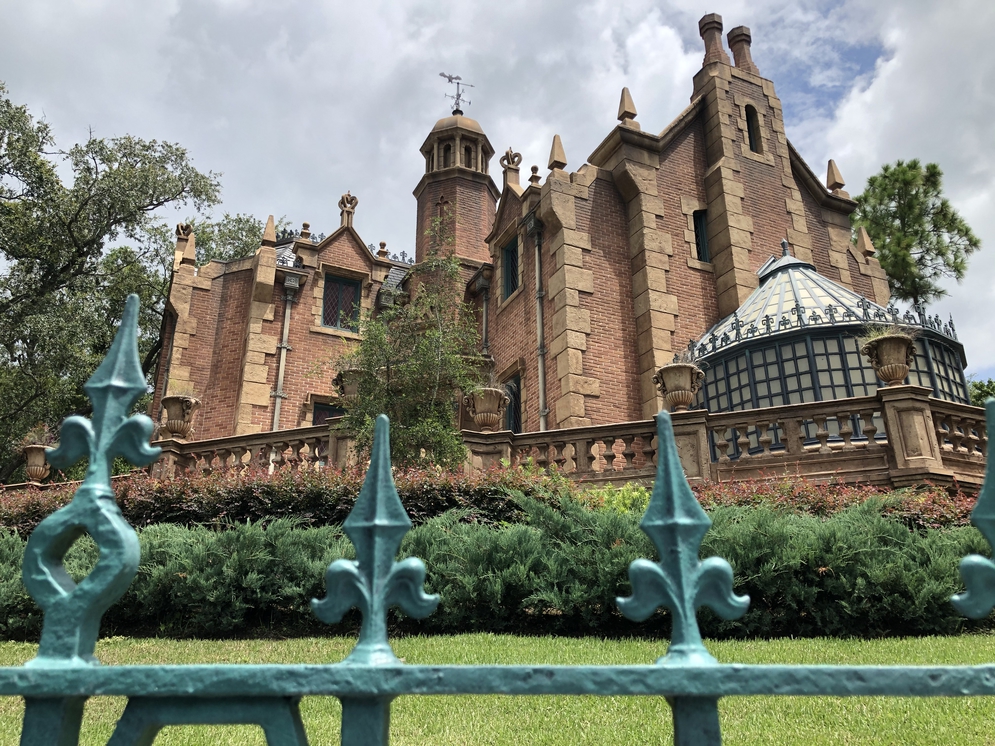 Disney parks around the world include dozens of attractions that amaze guests of all ages. From the simplicity of It’s a Small World, to the thrills of Test Track, they are designed to cater to a variety of families, ages, and tastes. So which attraction is the best Disney has ever built? Answers to this question are as varied as Splash Mountain, Flight of Passage, and even the People Mover.

But in my opinion, one attraction clearly stands out. That is the Haunted Mansion. A classic, but also innovative; this ride provides a delightful trip into the afterlife for guests of all ages. With a fascinating backstory, and the ability to be adapted in parks around the world, this attraction epitomizes everything Disney looks to portray.

As one leaves the queue, they enter an almost pitch-black hall and proceed to the stretching room with an ominous narrator and equally ominous portraits. Guests then proceed to their Doom Buggy, and into the world of 999 Happy Haunts (with room for one more). Some of the most beloved scenes in Disney park fandom then unfold, including Madame Leota’s séance, the ballroom scene, and a somewhat whimsical graveyard. The overall experience is one of the finest offered on property, displaying showmanship and Imagineering at its absolute best.

Not unsurprisingly, a haunted house attraction was an idea conceived since the earliest sketches of Disneyland began. However, the Haunted Mansion as we know it did not open until August 1969, opening 14 years after Disneyland. Exactly what the experience would be, and how it would fit in, was a contentious issue both before and after Walt Disney’s passing in 1966. Would it be a walk through? What would be the story and how would it look? Plans for a creepy abandoned building were seriously considered, and just plain weird elements, such as hands coming out of the wall holding candles, were suggested. But an abandoned building was not deemed an appropriate aesthetic. The idea of a walk through, museum of the weird, and guided tour were all shelved. The Omnimover system and Doom Buggies, largely developed by Bob Gurr, were chosen, allowing for the smooth tour to which we are accustomed.

The story of how the Haunted Mansion came into being is one of the most interesting and quarrelsome of any attraction seen in the parks today. To learn more, I highly recommend: Disneyland at 60: Happy Haunts (Finally) Materialize, available through the DisUnplugged Disneyland Show archives.

Unfortunately, my experience with this attraction is limited to Walt Disney World. In the Magic Kingdom, the Haunted Mansion fits well. Located in the superbly themed Liberty Square, the attraction has a beautiful queue with punny tombstones, often offering homages to Imagineers and characters such as Mr. Toad. While waiting, beautiful views of Tom Sawyer Island are available. It is often one which can easily be enjoyed early in the day without a FastPass (when in use) and provides a cool dark respite from the heat. It is located somewhat centrally in the park, near an entrance to Fantasyland, and not an impolite distance to Frontierland and Adventureland.

As per usual, Disney’s merchandising department has done an excellent job in tapping into guests’ love for this theme and the characters involved. Memento Mori is a merchandise location devoted specifically to the Haunted Mansion.

Songs including Grim Grinning Ghosts; and characters such as the Hitchhiking Ghosts and Madame Leota have become especially iconic. While updates are, of course, always necessary, many like Madame Leota have remained a fan favorite. These characters, songs, and effects stretch back to many early Imagineers and important contributors to the world of Disney. Some, such as Rolly Crump, are well known to those who are interested in Disney and theme park history. Others are not, such as Eleanor Audley who provided the original voice of Madame Leota. Ms. Audley was a prolific television and radio actress of the mid-twentieth century who also voiced Lady Tremaine (Cinderella’s stepmother) and Maleficent.

The homogenization of Disney parks around the world is a conversation which is occurring with ever-increasing frequency. And this concern is certainly valid. Why would I fly to Hong Kong if I can simply fly to Florida and have the same experience? Well, when the Haunted Mansion has been added to other parks, it has been adjusted to match both the theming of the respective area, as well as the culture of the country in which it is built. In Disneyland California, it is in New Orleans Square, while it is in Liberty Square in the Magic Kingdom. Tokyo Disneyland placed theirs in Fantasyland, and finally, Disneyland Paris’ is in Frontierland. The original in California is built to flawlessly fit in with the theming of New Orleans, and in Walt Disney World, it was built to a fit the Dutch architecture of the Hudson Valley. The same ride can be sent around the world and adjusted to stay true to the original. Disneyland California enviably has a Holiday overlay to their iteration based on The Nightmare Before Christmas.

Updates to this attraction have been done without being vulgar or unnerving. The murderous bride has a projected face, as can be seen on several other rides on property. Ghosts follow you home and can be seen in mirrors at the end of the experience. Interactive elements were added to the Disney World queue without taking anything away from the exterior or overall theming. Few other attractions could have such alterations without the classic qualities they possess being diminished.

Even in Disney arks, nothing is perfect. Children may not be able to enjoy the attraction as it might be too frightening. Also, those with mobility restrictions might find it challenging to get on or off of the Doom Buggy. If this is a concern you may have, the DisBoards has forums which can provide some insights if you have mobility challenges or if you are traveling with a child. The Haunted Mansion has been one that guests have enjoyed for decades.

Contending that a particular attraction is Disney’s greatest is a rather bold endeavor. So many touch people for a wide variety of reasons. Splash Mountain will always be of extra importance to me, as it was the first Disney attraction I ever went on. And to some, Seven Dwarfs Mine Train is absolutely worth a long wait. But the Haunted Mansion is a true classic. The ride has captivated audiences as it has been transplanted around the world, and new technology could, and has, been seamlessly added. While some younger guests may not enjoy the attraction, it is one which several generations now can fondly remember. It undeniably provides memorable characters, merchandise, and the caliber of innovation and imagination we have come to expect from a Disney park.