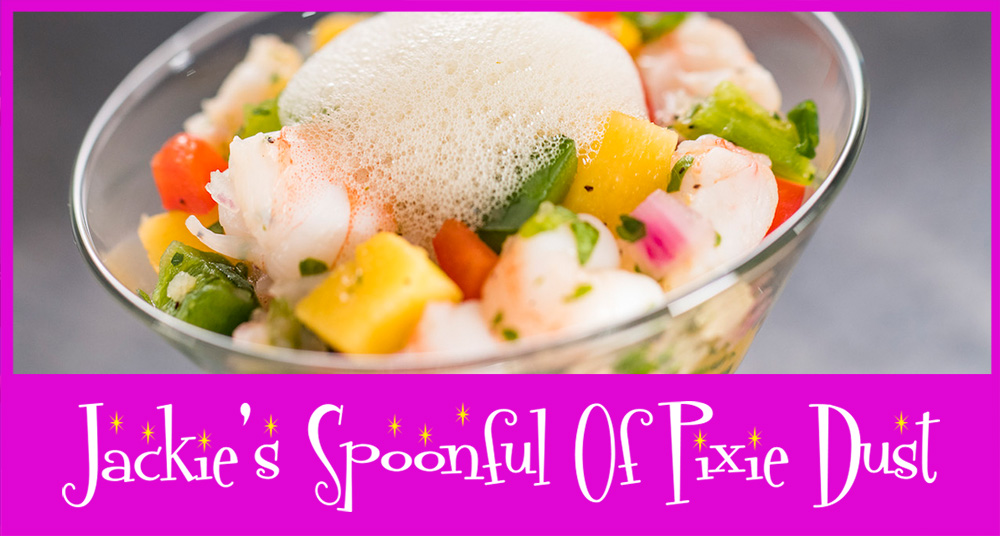 Happy Cinco de Mayo, everyone! Usually, today is a day that the Disney Parks Blog shares ways for guests to celebrate at various restaurants and bars around the Walt Disney World Resort. Since Disney World – including Disney Springs – is still closed until further notice, it’s definitely going to look a bit different this year. I thought it might be good to take a look at some recipes from Disney that we can make at home.

First of all, I think it’s fun that for the first time in years, Cinco de Mayo happened to land on Taco Tuesday! How cool is that? I know what we’re having for dinner which is a good thing because I don’t usually have that figured out until much later in the day.

The first recipe I’m looking at is a Shrimp Ceviche from the Food Studio menus at the Epcot International Festival of the Arts. I have most of these items in my kitchen already and I’ll likely substitute fresh pineapple chunks, raspberries, blueberries, and blackberries for the mango because I don’t happen to have that. I may skip out on the lime-mint foam and do a cilantro-lime foam instead – we’ll see. What a great and fresh appetizer to serve!

2.       In a small bowl, combine orange juice, lime juice, and sugar. Stir until sugar is dissolved. Pour over shrimp mixture.

3.       Add mango and cilantro and stir to combine. Season with salt and pepper to taste.

2.       Whip using a whisk or immersion blender until foam develops on the top. Allow to stand for 1 minute.

Another recipe that sounds good is for Tacos al Carbon with chicken fajita filling and homemade corn tortillas. This one is from the Mexico Global Marketplace at the EPCOT International Food & Wine Festival. The ingredients for this recipe might not be items that you’ve got readily available in your pantry and fridge, so a trip to the grocery store might be in order.

This recipe for Chorizo and Chicken Quesadillas – also from the Global Marketplace in Mexico – sounds right up my family’s alley so we may give it a whirl since I happen to have chorizo in the freezer. If you don’t care chorizo, you can leave it out, of course. I didn’t actually like it the first time I tried it but it’s grown on me over the years.

Lastly, the side dish we’re having is not an official Disney recipe, but it’s on that our very own Craig Williams taught me for Mexican Street Corn. All you have to do is take cooked corn, – I do it on the cob, but you can just use kernels and mix it all up in a bowl if you want – give it a smear of mayonnaise, a sprinkle of Tajin seasoning, and a squeeze of lime juice and that’s it! It’s the easiest and most delicious side dish EVER. I will say that we don’t have it often because corn slathered in mayo might not be the healthiest choice ever, but it’s worth it.

For more Disney-inspired recipes, head over to the Cooking forum over on DISboards.com where you’ll find tons of yummy information, reviews, and recipes.

I hope you have a great day and a great time celebrating Cinco de Mayo, whatever you choose to do!