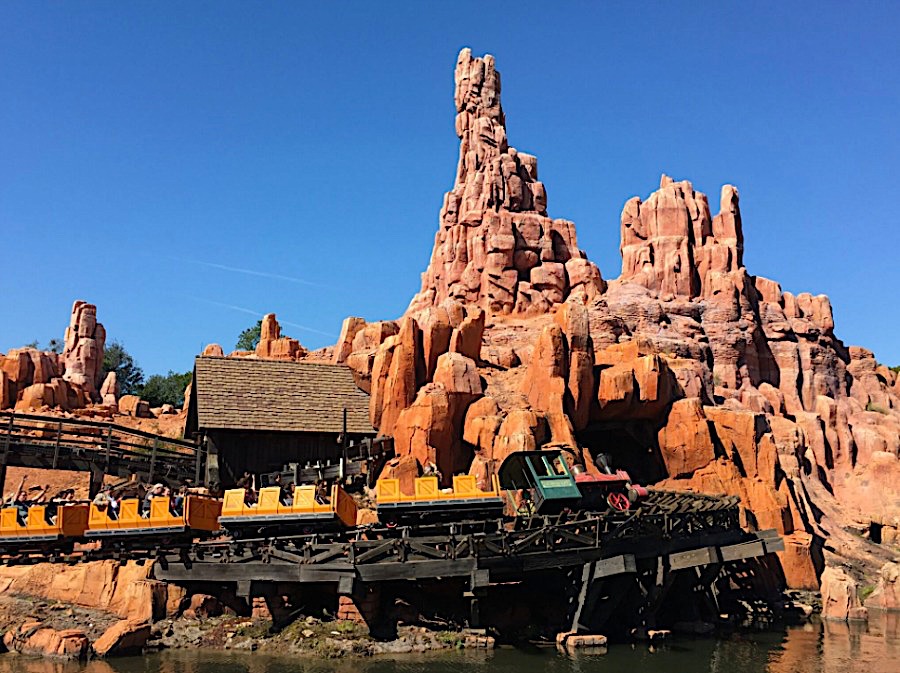 Welcome back to the June edition of A Brief History of Disney, where in the last week of each month, we take a walk down memory lane and learn more about how our favorite attractions came to be.

Recently, I’ve been thinking more and more about the classic Disney Mountains, you know, Splash Mountain, Space Mountain, and Thunder Mountain thinking that our next deep dive definitely needed to complete the trifecta. And so, here we are. Are you ready to take a runaway train ride with me into the history of this wild, wild west attraction?

Even though this fan-favorite attraction has always featured a train ride as its central premise, its original form wasn’t considered to be the thrill ride it is today. The Disneyland site was known as Rainbow Caverns Mine Train from 1956 – 1959, a slower-paced train tour through the old west inspired by Walt’s interest in the southwestern landscape of the United States. From 1960 to 1977, the attraction site evolved into Mine Train Through Nature’s Wonderland, where some of the original structures and pieces from Rainbow Ridge remain as a nod to Walt’s initial Old West vision for the attraction.

In the first instance of its current form, Big Thunder Mountain Railroad was another creation from the Imagineering mind of Tony Baxter. This well-known Disney legend took inspiration from the famous spires or “hoodoos” of Utah. Baxter brought the Old West to life in a new attraction that gave guests a more exciting experience as they boarded a train for the adventurous frontier of the 1800s.

The new attraction was initially expected to debut in Magic Kingdom. The project was paused in 1972 to allow resources to focus on the east coast construction of Pirates of the Caribbean and then again in 1975 to make way for Space Mountain. It wasn’t until 1977 that construction finally began, though not in its original location. This time it was being constructed in Anaheim’s Disneyland, where it would ultimately open to guests in 1979, one year before its Walt Disney World counterpart in 1980.

Over the years, the Big Thunder Mountain Railroad has had many refurbishments, including the addition of special effects, a revamped storyline, and substantial changes to the track. In the last ten years, significant upgrades to the mine scenes made the experience more immersive in both Disneyland and Walt Disney World. It is said that the Orlando version was allocated much more space than the Anaheim track making it roughly 25% larger.

Big Thunder Mountain is widely considered one of the more popular attractions in Magic Kingdom, just as it is in Disneyland Park, Disneyland Paris, and Disneyland Tokyo. The winning combination of Walt’s fascination with the wild, wild west and Tony Baxter’s creativity produced a ride that has stood the test of time, transitioning from a western experience to a wild adventure, full of all the exciting twists and turns we love today.

Let me know your first experience with this Disney Mountain and what you remember most about the different versions of this ride we have seen throughout the years. Mine includes me as a curly hair, sassy six-year-old wearing matching, hand-made outfits with my sister, then eight, in the front seat of a runaway train.