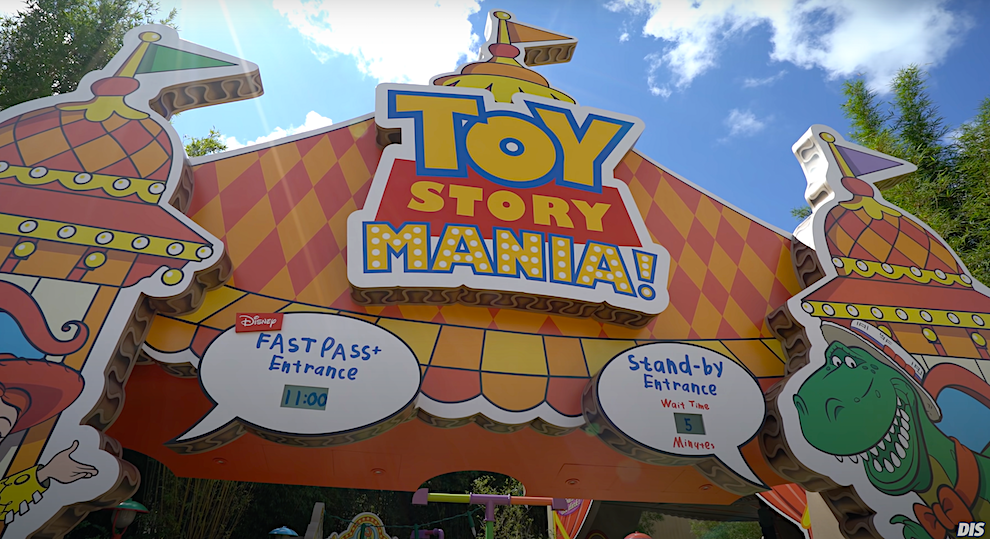 Welcome back to the last Wednesday of the month, where we like to take a moment out of our busy Disney lives to appreciate the history of the place we love. A Brief History of Disney is a series that takes a deep dive into the origin story of park attractions, exploring how they came to be, one at a time. This month, we are taking a better look at one of the newest attractions we have tackled so far, Toy Story Mania, known as Toy Story Midway Mania in Disneyland.

It all began in 2005, at the beginning of Disneyland’s 50th-anniversary celebration, when two Imagineers, Kevin Rafferty and Robert Coltrin, worked together on the new Radiator Springs Racers attraction. The pair had recently ridden the Buzzlight’s Astroblasters attraction in Disneyland and were brainstorming ideas to add an interactive experience to California Adventure in a similar fashion. The approach couldn’t be implemented in the Cars Land ride they were building, but that didn’t stop the two creators from working on their masterpieces.

While they continued developing their concepts, a simple walk through what was then known as Paradise Pier sparked a brilliant thought. One of the midway games in the area inspired Rafferty and Coltrin to base the attraction on simple carnival-style games and incorporate the new ride into this park area; it was later decided to have it directly beneath the resident rollercoaster, California Screamin’.

Development on the project moved very quickly, with Disney execs like Bob Iger and Pixar’s John Lasseter coming on board to greenlight the proposal. Initial drafts of the storyline saw Toy Story characters hosting games that the guests could ride through. Plans for the games were unanimously praised, leaving the two Imagineers little time to work out the specifics of turning their dream into a reality. Ride vehicles that could spin a full 360 degrees, and the interaction with each game that was conducted through the use of screens was a departure from the original inspiration of Buzzlight’s Astroblasters, resulting in a truly unique attraction that would mark a turning point for Disney’s creativity.

The placement of the attraction in its Paradise Pier location required some construction changes to the surrounding area, allowing time for the creative forces at Disney-MGM Studios (Hollywood Studios) to make their move. It was decided that for the first time, Disney would try its hand at building the same attraction in two locations. Sure, we had already seen a repetition in ride instruction and theming, but installing the same attraction in two places simultaneously had never been done before. Luckily, the design fits perfectly within a vacant area of Pixar Studios.

The next step was honing in on the perfect series of games, bringing those ideas to life in a way that was easy for guests to follow in the less than a minute they had to experience each one. Imagineer Sue Bryan took the lead on this portion of the project, heading up a team responsible for the interactive game creation. Challenges arose at every turn, one of which was designing a shooter mechanism that could be easily adjusted for guests of all heights and shapes. A customizable safety barrier system was developed, allowing guests to use the device at a comfortable height and distance from their person based on where the safety bar was locked.

Finding the sweet spot for difficulty took longer than anticipated, with regular testing of each game showing the need for a more intuitive structure. Targets were multiplied, and an element of magnetism was added to them, aiding guests in making successful shots and thereby improving overall satisfaction. Multiple iterations of the games were created until the final version was completed.

In late May of 2008, the first 3D interactive attraction Toy Story Mania! debuted at Disney’s Hollywood Studios on May 31, 2008, beating the Disneyland team to opening day. Disney California Adventure Park’s edition, located in Paradise Pier, wasn’t far behind, opening its doors on June 17, 2008. The attraction opened to rave reviews, not only for the ride itself but also for the detailed queuing area and the addition of My Potato Head, who was able to greet guests and tell jokes in a way guests had never seen before.

Both versions of this ride have remained relatively the same, except for the entrance to the east coast location that underwent significant redevelopment for the introduction of Toy Story Land, which opened in 2018.

This attraction is right up there with the longest I have ever waited in line. That infamous day when the overhead sign said 45 minutes, and we ended up waiting well over two and a half hours was a doozy.

What are your first memories of this attraction?