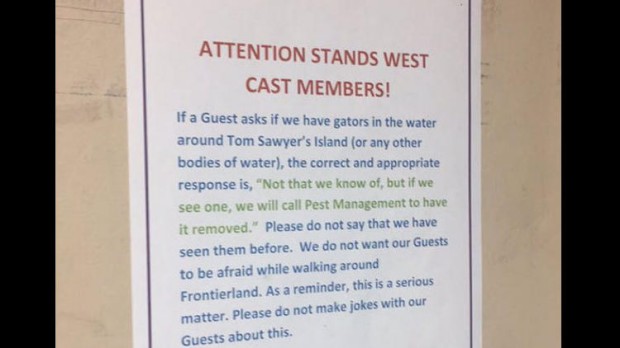 A Magic Kingdom cast member was fired (then later rehired) after posting a picture on Twitter of an unauthorized sign telling cast members how to respond to guests about alligators.

When College Program cast member Shannon Sullivan saw the sign backstage, she knew it might get her fired, but she was so bothered by it that she posted a picture of it on social media.

Sullivan has a 2-year-old brother, so the alligator attack last month at the Grand Floridian hit home for her and she felt that Disney should be advising caution, not skirting the issue.

Disney quickly removed the sign, but Sullivan’s manager still confiscated her cast member identification and informed her that her College Program internship would end early.

After the Orlando Sentinel began looking into the story, Magic Kingdom Vice President Dan Cockerell visited Sullivan and told her that she could complete her internship as scheduled.

Disney has told cast members to confirm that areas of the resort can attract wildlife and to notify security of any alligator sightings.  The sign that Sullivan posted was not authorized and not the official policy.

As Disney does not know who posted the sign, no other cast members will be disciplined.