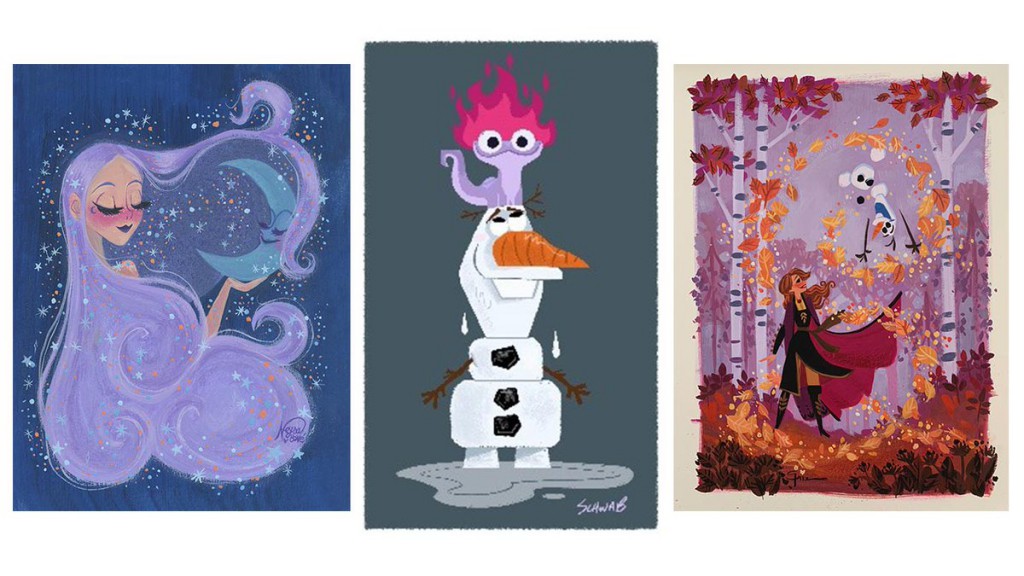 The Disneyland Resort has announced the featured artists that will be greeting guests at the WonderGround Gallery in Downtown Disney throughout the month of November.

Lorelay Bové graduated from California Institute of the Arts in 2007, completing an internship at Pixar Animation Studios in Emeryville and then started her career in the visual development department. Lorelay has worked on the Disney animated movie “The Princess and the Frog” providing visual development, color characters, costumes, props, backgrounds and end credit sequence art and designs. Lorelay has also worked on visual development on a variety of other Disney animated movies such as “Tangled,” “Tangled Ever After,” “Ballad of Nessie,” “Winnie the Pooh,” and “Prep and Landing,” just to name a few.

Neysa Bové studied Fashion Design at FIDM (The Fashion Institute of Design and Merchandising) and later took courses at Cal Arts’ acclaimed animation department. After a Costume Design internship at Walt Disney World, Neysa began her career working at Disney Consumer Products. Her very first film contribution doing visual development and costume design was on the Disney movie “Moana.” Since then, she’s worked on Disney and Pixar movies including “Wreck it Ralph 2,” “Frozen 2,” and “Raya and the Last Dragon.” As a lover of whimsical and beautiful things, she wants her artwork to reflect that by choosing light and fun themes, by using fun and colorful palettes and transporting the viewer to a happy and fun world.

Artisan of the Month – Jackie Huang

Jackie Huang moved to Los Angeles after high school to attend the University of Southern California’s School of Cinematic Arts. Shortly after graduating, she returned to school to study illustration at Art Center College of Design. There she found a new way of storytelling through her love of paper art and pop-ups. Whether it’s through a pop-up unfolding before your eyes, or tilting your head to see another angle of a paper sculpture, Jackie believes in crafting a moment that makes you pause. She invites you to see how the ordinary can become extraordinary.

Celebrate the upcoming new animated feature on November 23rd from 5:00pm to 7:00pm. Artists who worked on the film will share their artistic styles.

Brittney Lee is a visual-development artist at The Walt Disney Animation Studios. A graduate of the Rochester Institute of Technology, she knew that she would pursue a career in animation from the moment she saw the Disney animated classic “The Little Mermaid” at age six. Her handiwork can be found in the movie “Frozen” and “Wreck-it Ralph” as well as the Disney short films “Paperman” and “Get A Horse!”

Griselda Sastrawinata has always been influenced by art and animation. She fell in love with Disney as a little girl watching the classic Disney movies “Cinderella” and “Sleeping Beauty” and it has always been her dream to be part of the Disney family. Griselda began her animation career while she was finishing art school and after graduation, she worked as a visual development artist and character designer. Through her career, Griselda has worked on numerous movies and, in 2015, realized her dream of becoming a Disney artist for the Walt Disney Studio as a character designer and visual development artist.

Bill Schwab is an art director of characters at The Walt Disney Animation Studios. This is the first time Bill will be attending the WonderGround Gallery Showcase to show off his “Frozen 2” inspired artwork.

Miss Mindy is a Los Angeles native currently living and working out of her elf-like design studio tucked away in the hills. Her ‘cartoon folk art’ ranges from fluid ink drawings and paintings, to her fabulously handcrafted sculptures. She is also a toy making aficionado. Her inspiration is her grandmother, who worked as an ink and paint girl for The Walt Disney Studio in the 1930’s. In addition to her fine art career, she has been prolific in creating animation designs, stories and illustrations for a slow of notable companies since the early 2000’s.