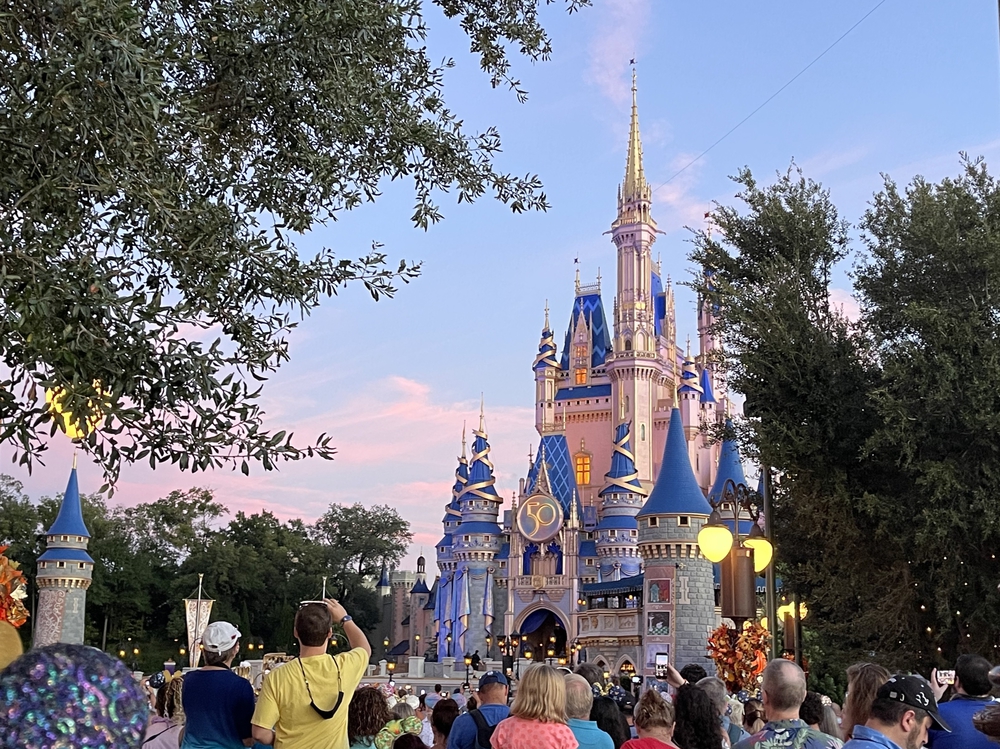 I wish that I could invite you over for a cup of coffee and tell you all about the experience of being in the Magic Kingdom on Friday, October 1st for Walt Disney World’s 50th anniversary. In lieu of being able to do so, please pull up a virtual chair at my kitchen table and settle in with this article. I’ll pour you a cup of coffee (we’ll be drinking Joffrey’s 50th Anniversary blend, of course) and let me step you through the day. If you’re planning a visit on a BIG Disney day like the 50th, some of my experiences might help you along the way.

Staying on Property had a Perk

My husband and I made the decision months ago to get a room on property at Disney’s Coronado Springs Resort for the 50th. We felt like it would just make things easier all the way around. And that it did. We rose at o-dark-thirty, got ready, and made our way to the resort bus stop. My hubby initially received conflicting information when he asked about the time that the first bus would arrive to take guests to the Magic Kingdom. Thankfully, after the first answer that he received didn’t quite add up, he asked again and received the correct info. Just in case you’re trying to make it into a park first thing, if you’re staying at a Disney resort, you’re allowed Early Park Entry, meaning you can get into the park and ride select attractions 30 minutes before the official park opening time. Back up an hour, and you have the time that the first bus will arrive to your resort. We approached the bus stop well before the scheduled first bus at 6:30am, and there was already a line of 60 or so in front of us. Disney thought ahead and sent charter buses, and thus transported more guests than a standard Disney bus would. The first bus pulled up, loaded up a bunch of guests (of which we were the last two), and headed off to the Magic Kingdom.

Because the Disney resort buses bypass the Ticket and Transportation Center, and thus the extra time of having to navigate the monorail or ferry, and drop guests off at the Magic Kingdom bus depot, we were through the gates and taking pictures of the train station at 6:54am. As someone who never made it fully through any of the 24-hour events held in the past at the Magic Kingdom, it was wild to be there before dawn. The overall mood was one of excitement, and everyone was just happy to be there. I didn’t even care about the lack of caffeine in my system. The biggest thing on a morning like this is simply to get there. Everything else is icing on the cake. And, at a time when the perks of staying on property are being rapidly dissolved, this was definitely one for the win column.

A word of warning: the area for resort guests to wait in the Hub for the morning welcome show doesn’t offer a better view than simply waiting with everyone else in front of the castle does. If you’re wanting to ride attractions, follow the arrow and have fun. If you’re wanting to watch the show, it’s my advice that you stay in the center part of the Hub.

Once inside the park, we heard murmurings that the virtual queue for day-of merchandise had already filled and closed. It turns out that MK leadership made the call to allow guests into the park well ahead of the advertised time for even resort guests due to the sheer number of people. I don’t fault them for doing so.

All day-of merchandise was being staged in Big Top Souvenirs in Storybook Circus, and a virtual queue (the bane of many a Disney guest’s existence, I know) had been utilized to allow an orderly approach to selling it. Thankfully, murmurings were also circulating that the queue would be reopened during the day as space became available. Mercifully, open it did and we were able to get into the queue. But be ye warned: if you’re attending a big Disney day like the one we just celebrated on the 1st, know that you may need to dig around to get the information that you really need. The special day-of merch was only officially advertised on a few sandwich board signs, so if merch would be a priority for you, be sure to ask a cast member or two about its presence and the purchasing process. And that now infamous video of a fight breaking out in the Emporium? Thankfully, that was an isolated incident. Is wasn’t the Wild West on the 50th. I promise.

The area near the flagpole was fairly packed at 7am. That’s a thing about these big days: there will be lots of peeps. Don’t get me wrong; you will find pockets of space here and there, but be prepared at times to be one among many. Also, if you’re wanting to buy merch of any kind other than the day-of variety, please know that you’ll be waiting. Ride times throughout the day were low (hello, Peter Pan’s Flight at 40 minutes), and it was due to the vast number of guests who were waiting in incredibly long lines for the Emporium and for the collectible popcorn buckets. Four different buckets were being offered for purchase on the 1st, and you had best believe that the lines for them were long. If you fall into the category of wanting one (or four) of those buckets, please grab your caffeine before making your way to the park ‘cause you’re going to be in that line for quite a while, and you’re going to need it.

On a normal Disney day, I have no problem mobile ordering and finding available time slots just minutes away. On a day like the 50th, mobile ordering in advance is the way to go. In fact, it’s one of the only ways to go. Yes, you can wait in line for Starbucks, The Lunching Pad, or Sleepy Hollow, but you’ll be waiting for quite a bit. Thankfully, my husband had the forethought just a little while after getting into the park to open My Disney Experience and grab a mobile order time at Sleepy Hollow. Waffles for breakfast? Yes, please. My advice is to do the same for lunch and/or dinner at that time as well. And remember: on the huge Disney days, it can even take a bit to pick up your order. I talked to a guest who was told the wait to pick up her order from Pecos Bill once she got to the location would be 2 hours. Yikes. No, thanks. Just a tiny bit of planning can make mealtimes a delight rather than a chore.

If you’re doing a big Disney day, odds are good that you’re in it for the long haul. Dawn to dusk (and beyond), baby. If that’s the case, for the love of all things sanity, please plan for a bit of downtime. We chose to have dinner at Crystal Palace at 5pm, and it turns out that it was the perfect thing at the perfect time. A little air conditioning, a little space, and all the food we wanted. The team at Crystal Palace has just added a ton of Walt’s favorite foods to the buffet in celebration of the 50th, and while Pooh et al aren’t traipsing around the place right now, the meal is really good and it’s priced at $39. In my opinion, for a Disney buffet located in the center of the Magic Kingdom, that’s a really good value.

If a table service meal isn’t in the cards, a Dole Whip could be. A cold Dole Whip and a bench in the shade sounds like paradise on a busy park day. Whatever your speed, try to work a bit of margin into the day.

If you’re considering leaving the park on a big day like the 50th, know that guests whose original park pass/reservation was for the Magic Kingdom were being allowed to return without the fear of being shut out due to capacity. Park hopping was paused here and there throughout the afternoon for guests whose first park pass/reservation wasn’t for the MK. So, if your downtime includes leaving the park, just double and triple check with cast members before doing so.

We all want to be in the Hub for fireworks, right? Well, for Disney Enchantment, the pressing need to be in the Hub is a little less so. The storefronts along Main Street, U.S.A. get into the nighttime spectacular action with Enchantment, so even if you’re back a bit, you’ll still be a part of the fun. And just think…the closer you are to the exit, the closer you are to beating the throngs out of the park. And on a BIG Disney day, there will be throngs after the fireworks. My hubby and I watched Disney Enchantment near the train station and were out of the park in a shot. We had made it from before dawn to after the 9:45pm fireworks; our day was done, and we zipped right out of there. Of course, if you were of the mind that the night was still young, the park was open until 11pm. Party hearty, my friends.

No matter what BIG Disney day you attend (and really any day at Walt Disney World is big, right?), I hope that you love every minute of it. There’s magic all around on days like these, and if you do a little planning, it’ll allow you to savor that magic just a bit more.

What advice would you add to the list? Let me know in the comments below!