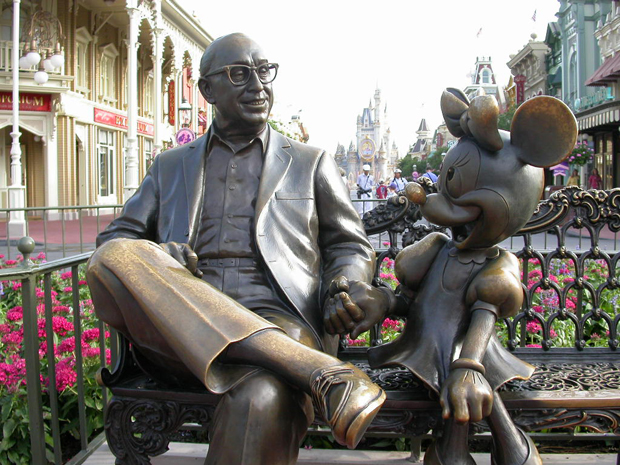 We first visited Walt Disney World in 1994 when my parents were in their late fifties, and they’re now approaching their eighties. Even though they are still very much young at heart & in good health, the combination of the Florida heat & long days does sometimes take its toll.   Over the last couple of trips, I have tried to plan relaxed days at the parks without compromising on experiences on our must do list & have included some suggestions for a more relaxed vacation. No matter the age of the individuals in your group, bear in mind their physical limitations as the Florida heat can zap the energy from the best of us; however, older members of your family will be more affected.  Plan your days to include cool breaks from the hottest part of the day, to conserve your energy & get more out of the vacation.

Planning your vacation in advance by using MyDisneyExperience can cut down a lot of queueing for the busiest rides once you arrive (Disney resort guests can book up to 60 days in advance & other guests can book 30 days in advance – valid park ticket  and/or resort booking needed).  One of the things that always wears us down in the Florida heat is shuffling along in a standby queue, but with the new FastPass+ system you can now book 3 rides in advance for the most convenient time for you & your family to return with a shorter waiting time.  Also if you have an Android cell phone or iPhone, you will be able to view queueing times (standby) around the parks without walking to the attractions first.  It is also handy for checking restroom locations as well as accessibility restrictions for rides. The greatest invention in the Florida heat is definitely air conditioning.  There are plenty of activities & attractions which are completely indoors to cool you down during the hottest part of the day.  Try planning attractions that have outdoor queueing areas for the early morning or after 5pm or 6pm when the heat isn’t so intense.

Being hydrated doesn’t just mean water, try an afternoon ice cream or sundae to cool off in the heat.

Some of my favourite cool delights: Break the day up with trips to resort hotels.  Why not take a boat trip to the Grand Floridian or Monorail to the Polynesian.  Visiting a Disney Resort during the hottest part of the day can recharge your batteries & cool you down before heading back to the parks.  Try picking a resort which is closest to the park you’re visiting whether it’s Coronado Springs (Animal Kingdom), Yacht Club (Epcot) or Grand Floridian (Magic Kingdom) or any of the other 20+ Disney resorts to choose from –  this will cut down on traveling times to & from the park.

Nearly all the resorts have a bar/lounge which are generally quite deserted during the day when others are still at the parks; make a pit-stop for a refreshing drink & relax in comfortable lounge chairs.

Some of our favourite places for midday/mid-afternoon breaks include:

It also gives you the chance to look around a resort which you aren’t staying at, taking in their unique theming & lovely surroundings as well as different shopping & dining experiences.

Don’t forget many of these resorts have other modes of transport to get you from the parks & back again.

Friendship boats call between these two parks with stops at the Yacht & Beach Club, Swan & Dolphin & Boardwalk in between.   The Monorail can also transport you between the TTC & Epcot (you need to change Monorails at the TTC to get to Magic Kingdom).

There are many different types of boat which travel from Magic Kingdom to/between resorts such as Polynesian, Contemporary, Fort Wilderness, Wilderness Lodge & Grand Floridian, as well as the TTC. Quiet spots around the parks

Sometimes the hustle & bustle of crowds of people around the parks can be exhausting. There are many rides which are often overlooked  as well as many that can just be a much needed break (long sit down).  Here are just a few:

•     Turtle Talk with Crush – Finding Nemo’s Crush the turtle, enchants & entertains in this show (benches & in the dark)

•     Living with the Land – a slow moving boat ride which informs about the use of the land, crop production & new ways to grow produce

•     Great Movie Ride – a moving ride through cinematic scenes including favourite such as Singing in the Rain, Mary Poppins & Casablanca

•     Walt Disney: One Man’s Dream – a look at Walt Disney’s life including rare footage & narrated in part by Walt himself (comfy theater chairs)

•     Finding Nemo: The Musical – songs have been added to the story of the movie & acted out with large scale puppets (bench seating)

Whether you’re young or young at heart, I hope that some of these suggestions will prove handy when planning your next relaxed Disney World vacation.