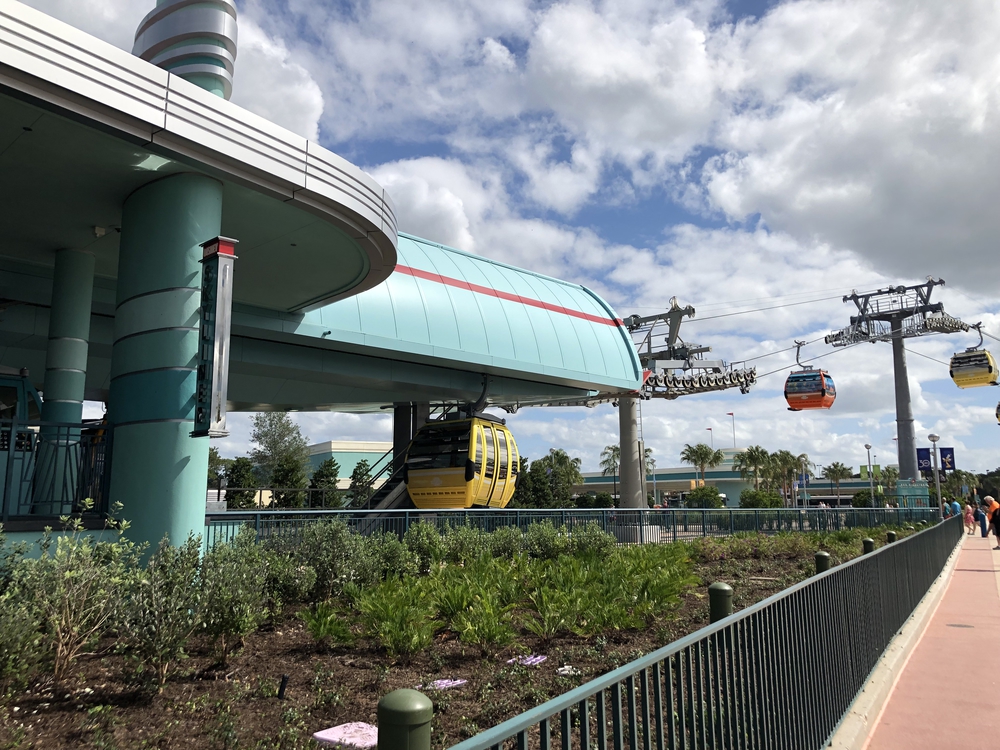 This morning, I had the pleasure of taking my first flight on the Disney Skyliner. Let me just say that it was everything that I wanted it to be, and more. For those of us who remember taking flight on the Skyway in the Magic Kingdom, this will be a very nostalgic journey. The Disney Skyliner had a lot to live up to, and, in my opinion, it succeeded.

The journey began at Disney’s Hollywood Studios in their beautifully appointed Skyliner station. Each gondola has two benches inside that have been designed to seat five people each. For guests traveling in an ECV or wheelchair, the wheelchair or ECV will go directly into the gondola, and a cast member will secure it with chocks for the duration of the trip.

Throughout the construction of the Skyliner, the question was raised again and again as to whether or not the air ventilation inside of the gondola would be adequate. Granted, it was a breezy day, but I was fine. Each gondola has a total of six air vents that help to keep the cross ventilation breezes flowing throughout the journey. If your gondola stops momentarily, it does tend to get a little bit warm, but it cools back down once the vehicle is in motion again.

The station at Disney’s Caribbean Beach Resort is lovely. It has details reminiscent of those you might have found at a train station toward the end of the 19th century. Walt Disney Imagineering incorporated wrought iron into the design of the station, and the aesthetic is quite pleasing. It’s simply beautiful. In fact, every Skyliner station is beautiful. The attention to design is readily apparent. Each station has been designed according to the resort in which it is located.

The view as gondolas pass over Hourglass Lake on the descent into the Skyliner station at Pop Century and Art of Animation is incredibly picturesque. The gondolas glide just above the surface of the water until they dock at the floating station.

It was so exciting to get a view of Disney’s Riviera Resort as we descended into the station on our way to Epcot. The Riviera Resort is slated to open in December, and, to get an up close and personal look at the resort, was exciting. The exterior façade is charming and elegant.

Upon leaving Disney’s Riviera Resort, we ascended to what seemed to be the highest point as we crossed Buena Vista Drive and made our way toward the turn station at Disney’s Boardwalk Resort. Guests do not disembark at the Skyliner turn station, and the gondolas will continue on to the International Gateway station. It was on the way to the turn station that our gondola stopped for several minutes. We were quite high, but it made for some great pictures. If you have a fear of heights, please keep in mind that the gondola could momentarily stop at any point.

On your descent into the International Gateway station, you’ll get an amazing view of the progress of the additions that are coming to Epcot’s France pavilion.

We had the chance to see Remy’s Ratatouille Adventure up close, and we flew over the construction of what I believe will be the Crêperie. It was incredibly exciting to see how things are coming along.

The International Gateway Skyliner station is a beautiful example of Art Nouveau design.

If you have a chance to stop by, be sure take a few moments to look at the gardens surrounding the station.

It takes just minutes to reach your destination on the Disney Skyliner. Again, keep in mind that the Skyliner can be momentarily stopped at any point. At approximately 10 minutes, the leg of the journey between Disney’s Riviera Resort and International Gateway is the longest.

Guests who are visiting Walt Disney World for the day and are wanting to ride the Disney Skyliner are being asked to park at Disney’s Hollywood Studios.

There is a narration that plays at points throughout your journey on the Disney Skyliner. Disney history and background information are given as you glide through the air, and, of course, safety information is given as well. Guests are asked not to stand while the gondola is in motion, and to stay seated until the gondola reaches the station.

The Disney Skyliner is slated to open on Sunday, September 29th. If you have a chance to take flight on the Skyliner, please do. And please come back and share your thoughts about your journey in the comment section below.