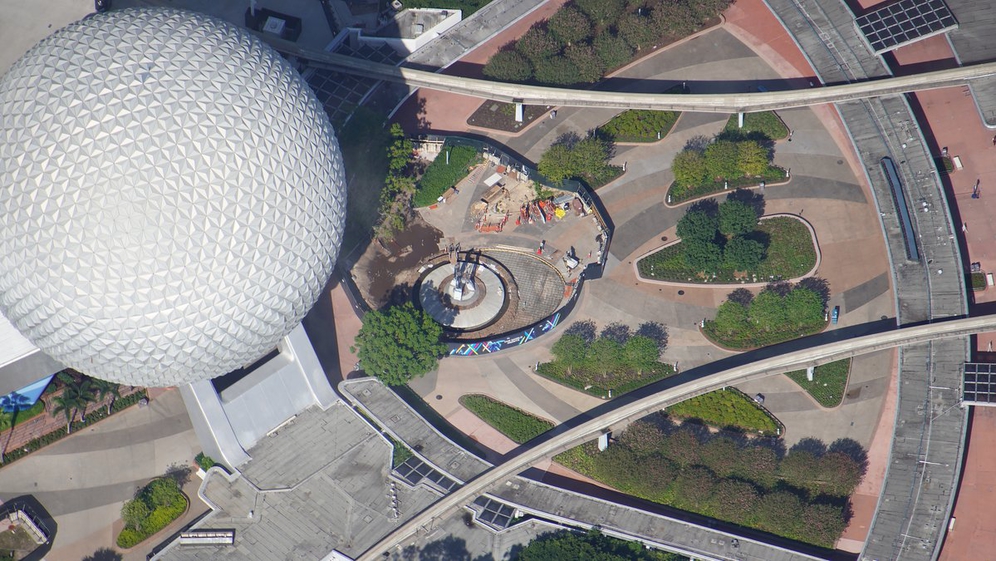 At times throughout the past year, we’ve taken the opportunity to take a look at the construction currently taking place in EPCOT. Even in this first phase of reopening for the Walt Disney World parks, construction projects are moving and grooving, so let’s hit the pause button for a few minutes and take a look around.

Thanks to Twitter user bioreconstruct, we have some new aerial images of EPCOT. The first picture to take a peek at today has us peering down at the new fountain being constructed in front of the park’s icon, Spaceship Earth. As you can see, the fountain’s construction seems to be close to completion, with the rebar grid already installed for the concrete slab at the base of the water feature.

For those who haven’t been able to return to EPCOT just yet, the aerial picture above gives a great overview look at the new entrance area without the presence of the Leave a Legacy monoliths. As you can imagine, guest flow has been greatly increased due to the removal of the monoliths.

A closer image shows us a clearer picture of the overall aesthetic of the fountain, which harkens back to the fountain that was housed in the same space during the park’s early years. As we’ve seen from the ground, the lucite pylons for the new fountain will stand tall in the middle of the water feature.

I snapped the above picture of the new lucite fountain pylons during a recent walk through the park. They really are stunning.

Our virtual tour now takes us behind Spaceship Earth to look at the progression of the work in what will become Dreamer’s Point. As we’ve covered in a previous construction update, the south side of Innoventions West has been completely removed.

We can see in the picture above that the canopy that used to provide shade for guests outside Future World‘s Electric Umbrella has now been removed. You can also get a feel for the extent of the work currently taking place in the original home of Mouse Gear.

The picture above is a shot that I took in July of the Mouse Gear building from the Future World East side of the building. We can see straight through the building, and you can get a grasp for the extent of the demolition.

Speaking of Future World East, our last stop for today’s construction update has us taking a peek at the area. The solar panels have returned to the roof of the former Universe of Energy show building, which will partially house the upcoming Guardians of the Galaxy: Cosmic Rewind. As the Wonders of Life pavilion transforms into the new PLAY! pavilion, it’s received new gold roof tiles. The green curved building of the forthcoming Space 220 restaurant can be seen next to Test Track near the bottom of the picture.

What are you most looking forward to experiencing in EPCOT once construction is complete?