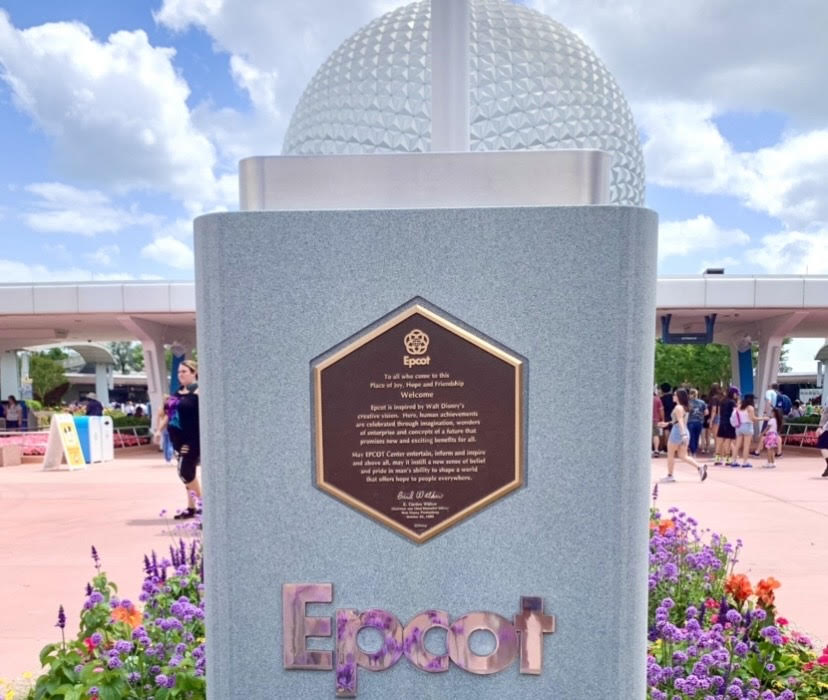 On my recent visit to EPCOT, before entering the gate, I stopped in front of the welcome plaque that reads the following:

“To all who come to the this Place of Joy, Hope, and Friendship…

EPCOT is inspired by Walt Disney’s creative vision. Here, human achievements are celebrated through imagination, wonders of enterprise and concepts of a future that promises new and exciting benefits for all.

May EPCOT Center entertain, inform and inspire and above all, May it instill a new sense of belief and pride in man’s ability to shape a world that offers hope to people everywhere.

It’s easy to feel that we don’t really know what EPCOT is anymore as it goes through its current metamorphosis stage. Pondering on this inscription of EPCOT’s foundation, my three take away words were “entertain, inform and inspire.”

If we think back to what Walt Disney originally conceived as the Experimental Prototype Community of Tomorrow, initially EPCOT would have been a functioning, operational city. However, with Walt’s passing, that vision was not seen through and EPCOT transformed into a completely new type of theme park with two parts; one based on edutainment through technological progress and the other a living, breathing world’s fair.

I was lucky enough to experience EPCOT close to the earlier days of its initial opening. Granted, I was barely two in the early 90’s, but I have the VHS vacation tape for reference. There has definitely been a shift from the sense of technological innovation and future prospects to where else can we fit IP, intellectual property, into the park. However, there are still pockets of edutainment and World Showcase has remained mostly intact in terms of experiencing culture.

But does the IP infusion change the integrity of the three takeaway words from the plaque: entertain, inform and inspire?

When the overlays of introducing Nemo and Friends to the Living Seas as well as the Three Caballeros to El Rio del Tiempo occurred, these decisions seemed to brighten the overall feel and approach to the attractions, allowing children’s interests to peak along with the adults without changing the intent. Check for entertain, check for inform, and potential check for inspire to learn more or travel.

However, when Maelstrom was announced that it would be converted into an attraction themed for Frozen, a good portion of Disney fans revolted. I myself would throw my hat in that ring because at the time I had a job that required me to listen to “Let It Go” eight times a day. The main argument presented itself as we love Vikings and Frozen does not actually take place in Norway. After all is said and done, the ride technically did not fit as seamlessly as the other introductions of IP. However, one could argue that the draw for Frozen could bring guests into the Norway pavilion and allow them to discover the spots that do traditionally share the country’s culture. And I’ll admit that Frozen Ever After is a fantastic dark ride. Check for entertain would seem to be the main goal here.

Remy’s Ratatouille Adventure perfectly fits into the France pavilion as the film exudes French culture in its own unique story, but grounding its focus on food. Check for entertain, check for inform in the sense you are exposed to the French language and cooking, and check for inspire to hopefully cook and possibly travel.

With Guardians of the Galaxy: Cosmic Rewind soon upon its opening date, we have to imagine that its main purpose as a swinging coaster set to rock tunes with our favorite MCU (Marvel Cinematic Universe) characters will be to entertain.

And I’m not insisting that each of these attractions featuring IP need to meet all boxes for entertain, inform and inspire. In fact, the last piece of guidance from the welcome plaque states, “… and above all, May it instill a new sense of belief and pride in man’s ability to shape a world that offers hope to people everywhere.”

I have to admit, for every attraction in EPCOT, I am left feeling hopeful for humanity. Whether I’m instilled with the feeling of creativity from Figment, connection from Spaceship Earth, or responsibility to protect the planet from The Land, EPCOT instills in me an optimism for a better tomorrow while celebrating the positives of today.

(Except Mission Space as that ride only leaves me feeling dizzy and slightly nauseous.) 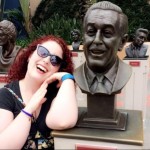 Emily has a background in the arts and has been going to Disney World since 1992. Recently, she has been adjusting to her move as a resident of Orlando as well as the change from avid vacationer to local park goer. Emily’s happy to be sharing her love for Disney through The Dis as they helped inspire her to pack her bags and follow her dreams.
Instagram & TikTok: @explorewithemilynicole