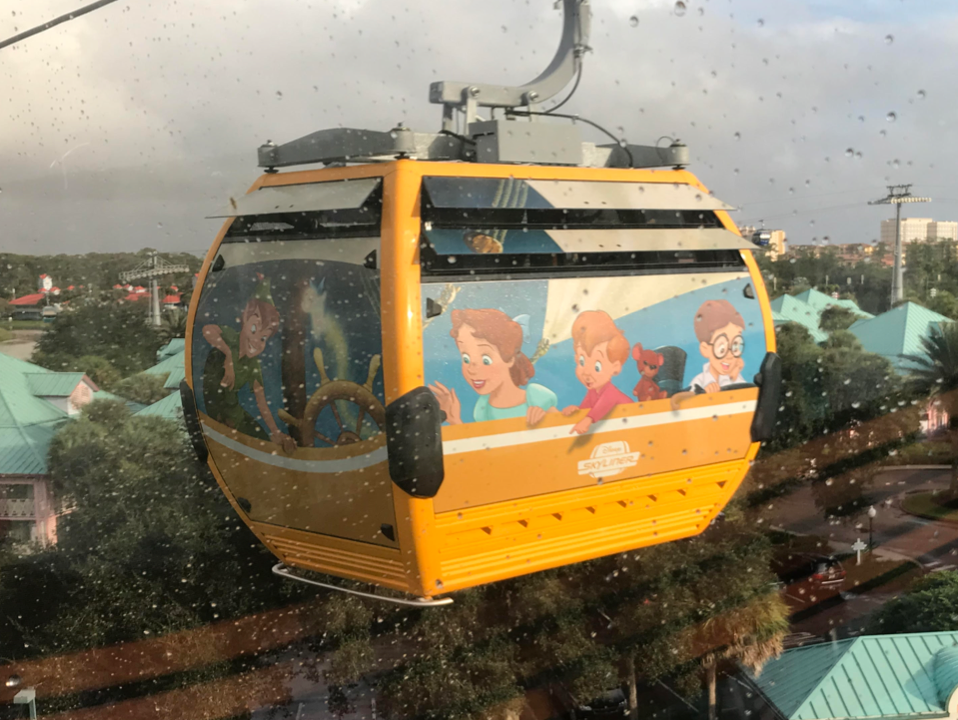 Recently, I visited Walt Disney World (WDW), staying at Pop Century Resort. The Skyliner opened on September 29, 2019 with three lines, five stations, and about 300 gondolas. Pop Century is one of the resorts on the Skyliner loop, and I cannot tell you how pleasant and efficient I found this system. In case you are not aware, the Skyliner system takes guests in gondolas from four resort stops and two theme parks (Epcot and Hollywood Studios) in vehicles that can seat ten. Currently, social distancing requirements limit capacity to one party per gondola.

Prior to the Skyliner’s opening, I was amongst many skeptics. Not a fan of heights, I was not sure if a ride would be a feasible or enjoyable venture. And, mostly visiting during summer, I was aghast at the thought of no air-conditioning. But the first time I took it in August from Hollywood Studios to the Riviera Resort, I was incredibly impressed. Smooth, cool, and quick; the ride was such an efficient way to get around property. More so than any other extant conveyance.

All Skyliner stations are impeccably themed to the area in which they reside. One would think the Hollywood Studios station had been there since the opening of the park. The stations are airy, covered, and relatively quiet. While lines can build, especially at park opening, one at least knows the line is consistently moving. This exists in stark contrast to busses where you really have no idea when the next one is coming. With greater reliability and movement of queues, at least when lined up, you constantly move, inching closer to your goal. This makes for a less stressful commute. The vehicles and stations make some noise but are overall very quiet. I was in a resort room near the Skyliner and could not hear it operating at all.

Vividly colored vehicles, most adorned with beloved characters, add a great deal of personality to the Skyliner. Characters from Pirates of the Caribbean, Haunted Mansion, Beauty and the Beast, Winnie the Pooh, and much more make for bright, lively gondolas. These touches add life to vehicles, which is not seen on boats or monorails. These coverings absolutely do not intrude upon the gorgeous sights that traveling on the Skyliner affords. Full views of the additions to the France pavilion and the Riviera gorgeously lit up at night are only part of what you see. At night, the skyline of Orlando is visible.

The way the routes are currently placed, the Skyliner is much more accessible than the monorail to guests on a budget. The monorail’s main loop runs from Magic Kingdom to three Deluxe resorts, and to the Ticket and Transportation Center. The Epcot loop is not currently in operation. The resorts on the Magic Kingdom loop, such as the Polynesian Village Resort, are not financially viable for most people. Rooms at $500 or more a night on this loop are to be expected. Therefore, as a daily mode of transit, the monorail has an air of exclusivity. Really, unless you have a dining reservation or decide to resort hop, there may be no purpose for you to take the monorail. Running from Value resorts (Art of Animation/Pop Century), Moderate/DVC (Caribbean Beach/Riviera), and Deluxe (Beach Club); the Skyliner is available to a larger number of guests who may be on a budget.

I was staying at Pop Century for $154 and had easy access to this mode of transportation. While the monorail is absolutely available to any day guest, the Skyliner can be enjoyed on a practical level for budget-minded guests.

And this highlights why the Skyliner is the best mode of transportation at Walt Disney World. Efficient and impeccably-themed transit is a win/win. It contributes to WDW’s reputation as a world class travel destination and increases visitor satisfaction.

Inclement weather directly impacts the operation of the Skyliner, inhibiting operations. If one has a fear of heights, a journey on a gondola is rather foreboding. My palms got quite sweaty on my first few rides. But understanding Disney’s devotion to safety, I do not doubt these are totally secure. Some also complain that the beams that support the track soil immaculate sight lines. But, as guests are less inclined to wait or have to walk long distances, quick transit and condensed buildings are a more prudent choice. Think of the tall and compact Riviera Resort versus endlessly sprawling Caribbean Beach Resort.

Please understand, I still love the monorail. For most guests, a visit to WDW is the only time they ride such a conveyance, and the instructions to stand clear of the doors are iconic. But the monorail as it stands now is worn, and complaints of poor maintenance are common. Boats, especially to get from Magic Kingdom to the Wilderness Lodge, are fun and offer stunning views of property. Rideshare services also offer quick and private transportation. The way the busses are run is simply indefensible. But the Skyliner serves as a quick, well-themed, and smooth way to traverse property. Hopefully, five to ten years from now, we will see more Skyliner lines built around property. If routes crisscross property, guests will be able to visit parks and resorts more efficiently than ever before.

What are your thoughts? Are you a fan of the Skyliner? Would you care to see even more Skyliner routes built?