What I Learned About Disney Fans from Attending the D23 Expo 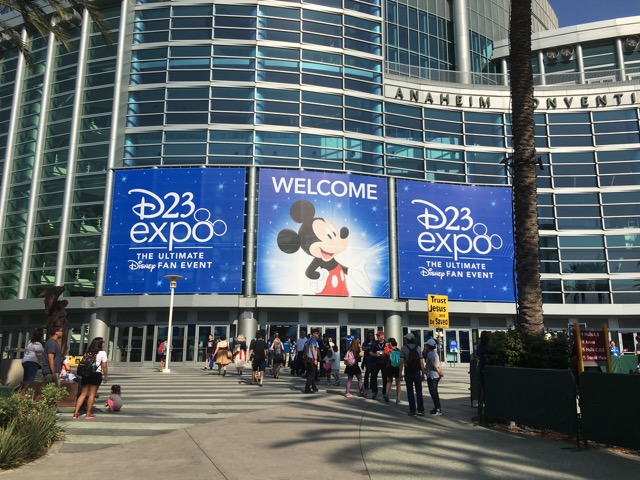 Before the D23 Expo this year, I always thought I was a “true” Disney fan. After all, friends and family mock me for going to the parks so often (instead of other vacation destinations). I am a former Cast Member at Disney’s Animal Kingdom. My office calendar, and the pictures on my desk at work, are Disney related. I talk about the parks, movies, and latest news constantly.

And then I walked into the Anaheim Convention Center on Saturday, June 15th, 2017. It was there that I learned what a true Disney fan really is.

For starters, I wasn’t sleeping on a concrete floor, in a freezing basement, in order to get into a huge panel. That was my first sign that I wasn’t as “hardcore Disney” as I thought. In fact, I didn’t even get into the Convention Center until 10:30 am (and I only had a one-day ticket).

However, even though I didn’t get to participate in any of the big panels, I did get to do a lot of people-watching while wandering the show floor and standing in lines. Here’s what I learned:

Disney fans are amazing at Cosplay.

I saw people with the BEST costumes at D23. Costumes better than those worn by the characters in the parks. I saw flashes of blue from the live-action Cinderella ball gown, glimpses of yellow from Belle’s iconic dress, and streaks of red and white from Moana’s island getup. It was amazing looking at all the detail these ladies put into their costumes; meanwhile, I can’t even sew.

Of course, I must give a shout out to the male counterparts and villains, too. Those princes were spot on, and a lady with spectacular Maleficent horns blocked my view at one of the smaller panels (but of course, I wasn’t about to mess with her).

And it wasn’t just the detail, it was the creativity. I saw a lot of gender bends: female Gastons and female Flynn Riders. I saw cosplay of rarely seen characters, such as Sergeant Calhoun from Wreck-It Ralph and Powerline from A Goofy Movie. Then there were those fans who just went all-out: people dressed as Lumiere from Beauty and the Beast, and people dressed as the Jungle Cruise attraction…complete with a boat and skipper.

I learned a lot about the art of Disney cosplay that day. Just, whatever you do, don’t step on their costumes. I accidentally bumped right into a girl dressed as Ariel, and she gave me the biggest stink-eye for almost stepping on her “tail”. I don’t blame her; if someone almost ruined my hard work by not looking where they were going, I would be miffed too.

Disney fans have a love/hate relationship with change.

However, mention getting rid of the iconic Pirates “auction” scene, or talk about replacing Figment, and (some) fans go nuts. Disney fans tend to want all the new rides, without any of the old ones being demolished or replaced. Our nostalgia factor is high, yet so is our envy of gaining attractions and shows with the newest technology and film tie-ins. These are hard feelings to balance.

Of course, we always seem to get over it the second something new and awesome opens. We have to trust that Disney knows what they’re doing, and that the parks were never meant to remain frozen in time.

Then you have the snarky Disney fans in the back room, who laugh at all of us panicking over certain ride closures. They think they’re so cool.

Disney fans get excited over EVERYTHING. And it’s awesome.

No matter what panel I was at, every time an announcement was made, the room erupted in cheers. Every time a celebrity or a Disney Imagineer, developer, animation designer, etc. walked out on stage, people cheered (and, in Richard’s Sherman’s case, everyone in the room gave the Disney Legend a standing ovation). The excitement was infectious, even for the tiniest of announcements. For example, I attended 4 panels, one of which being the Level Up: The Walt Disney Company’s Video Game Showcase panel. Star Wars: Battlefront II and a new Spider-Man game were revealed. I don’t really care for video games that much (I was there more for my husband’s enjoyment), but all the cheering really got me excited for these new games and VR experiences. John Boyega from Star Wars: The Force Awakens came out at one point, and the crowd went crazy.

The biggest surprise for me was how excited the crowd got over the announcement of a new land being introduced for Kingdom Hearts III. (If you haven’t heard by now, there will be a Toy Story land in the new game). People were clapping so hard that my ears were hurting, and even though I’m not a big Kingdom Hearts gamer, I found myself beaming along with everyone else. I remember at one point, I turned to my husband, and said, “Did you ever think you would be in a room where grown adults are applauding for Toy Story?”

I truly loved the excitement and the respect Disney fans displayed that day.

Judging by people camping out overnight just to get into the stores (the Disney Dream Store, Mickey’s of Glendale, and the Disney Store), I learned that Disney fans go crazy over rare and limited edition merchandise. Whether it’s pins, artwork, mugs, dolls, or clothing, we get excited over all of it. A lot of limited edition merchandise was sold at D23 this year, so it was understandable that people wanted to get their hands on it.

And though Disney fans might be divided on the type of merchandise being sold, or become distraught over merchandise that sells out quickly, I think we can all agree on one thing: we hate the eBay sharks. You know, those people that buy up every single LE item as soon as they hit the shelves, and then leave the Convention Center with bulging bags of merchandise to later sell on eBay (for double the price, I might add). It’s rare for Disney fans to all agree on something, but I’m pretty sure this is one of them.

Disney fans get me, and are some of the best people on the planet.

Never before have I felt more comfortable in a building full of strangers. These were MY people, and I loved getting to show my husband that there were, in fact, people out there just as Disney-obsessed (and even more so) as I was. These were people who knew about obscure Disney characters, retired attractions, and underrated movies. People who could sing every Disney song at the top of their lungs, quote every film, and listened to theme park music in their spare time. People who salivated over Dole Whips and mickey waffles. And, most importantly, these were people who all loved some aspect of the Disney company, and didn’t judge others for loving it too.

Despite everything I learned at D23, I learned the most about my fellow Disney fans. I learned how passionate they are. Most of all, I realized I was just as crazy as the rest of them, even if I wasn’t dressed in a homemade princess gown.