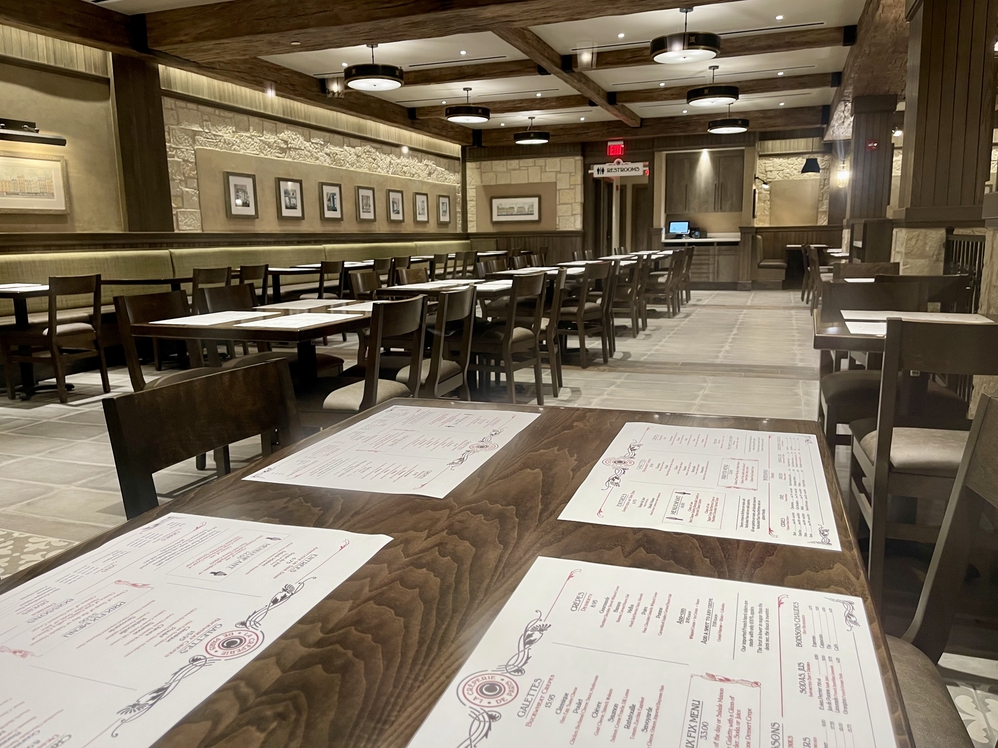 Vegan and vegetarian foods have come a long way, especially at the Walt Disney Resorts & Parks. There is still a long way to go, but they are improving. Recently, I enjoyed several sit down, table service meals that offer vegan and vegetarian options in the parks. Let’s have a look!

I used to not be able to eat at certain restaurants because there were no options for a vegetarian, let alone a vegan. Since those bleak times, Disney restaurants began offering what they thought were good options at the time. They included mostly pasta.

When eating on property you can now find at least one vegan offering on the menu, however, at most counter service restaurants they tend to be mostly meat-alternatives, meat substitutes, or plant-based options. If you want more variety, try some of these options!

What are you top favorite vegan entrées at table service restaurants on Disney property? Here are mine…do you agree?

Run, don’t walk, to the Vegetable Wellington on the new Steakhouse 71 menu. Finally, an option that is not meat alternative, but is creative and so so good! It is a wonderful, warm outer pastry with vegetables inside surrounded by a tomato paste with assorted vegetable garnishes around the outside. Very flavorful and a great comfort food, and reminiscent of the 1970’s time period that the restaurant wants us to celebrate this 50th year. In addition, the restaurant offers a couple of appetizers to choose from as well; I enjoyed the onion rings as well as the salad.

Romantic and cozy, this Epcot table service restaurant has a beautifully served vegan meal called Steamed Asian Impossible Dumplings. Yes, it is a meat alternative, which again is something I prefer to not have too much of, however, it was not a burger, which is a typical find in the parks. Instead, it was simmering and stewed within bok choy, beans, a flavorful Asian broth, and the ‘meat’ was stowed away cozily inside a wonton dumpling. Beautiful edible flowers were arranged in the bowl along with pink watermelon radishes. Le Cellier Steakhouse is a steakhouse just like Steakhouse 71 with a surprisingly welcoming menu for vegans. They also offer various sides and appetizers for us as well that are healthy and delicious.

House-made Rigatoni. Okay, this has to be described because ‘pasta’ just doesn’t cut it. It is so different, it is actually hard to explain. There is pasta, yes, however, it is surrounded in a warm bowl by a delicious bolognese sauce, and fresh, outstanding quality vegetables and greens. But the unusual surprise is what’s on top. An egg. Citricos is not giving you an egg though, you are vegan. It looks like an egg, exactly like a soft yoke in the center of your pasta and sauce. But it’s really a tomato-based rounded soft alternative that when you puncture it what looks like egg yolk oozes out onto your food. I probably would have preferred this to be something offered for breakfast at the Grand Floridian Café over their avocado toast, however, I have never seen or eaten anything like it so it was a lot of fun and unique. Don’t forget to add the corn soup to your entrée; it’s amazing.

We are allowed to indeed sit down and eat at steakhouses. But we can also wander into Epcot’s China pavilion and find food just for us in a Chinese restaurant. Nine Dragons Restaurant offered me a hot, not too spicy vegetable and tofu stir fry. Rice and broccoli, a rich sauce added to the plate and I even loved the spring rolls for my appetizer. Watch out for the MSG and salt, that sort of killed me after!

Honorable Mentions: Jungle Skipper Canteen’s Perkins Thai Noodles is one among a few offerings at this newish vegan lover’s restaurant, and it’s great for those wanting to sit down and take an escape out of the Magic Kingdom Park. Yak & Yeti Restaurant is full of many options that are very similar to a few of the Asian styles I have mentioned above, and worth the look if you are in Animal Kingdom Park. Yak & Yeti is also very adaptable and will help you make substitutions, and are always very accommodating to your customized needs.

We also sat down at the newest sit down spot, La Creperie de Paris and enjoyed their vegan entrée. Walt Disney World is really expanding their menus to be more inclusive to many types of lifestyles and I really enjoyed the different choices I had available to me most recently. If I had to make a recommendation, it would be for them to be mindful that vegan and vegetarians do enjoy having more than one option on a menu. Sometimes we only have one choice, which leaves me feeling not as valued as a guest. However, I usually check the items beforehand to be sure I will be happy with my selections.

Do you agree with my top vegan entrées at Walt Disney World’s table service restaurants? Maybe next time I will do a Disney Springs exploration! Let me know how you feel about vegan and vegetarian options in the parks below!