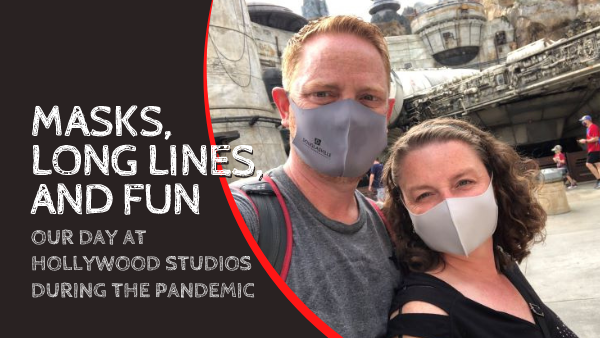 Our recent day in Hollywood Studios during the pandemic wasn’t exactly what we expected. Sure, we expected strict mask guidelines and lots of social distancing in the ride lines, and those things were in place. What we didn’t expect were the long lines that awaited us. After seeing countless social media posts from others, we expected a day of ease and little to no wait times. That was not our experience, and we were even there on a week day.

On a regular Disney day, our strategy is usually to get what fast passes we can, arrive early, go on the most popular rides first, and enjoy as many attractions as possible during the lighter morning crowds. This day was almost completely opposite. Of course, there were no fast passes, but we still got to Hollywood Studios well before the 10:00 opening. To our surprise, Disney opened the park early, and we were in the first wave of guests into the park around 9:30am. To our greater surprise, however, the line for Mickey and Minnie’s Runaway Railway was already an 85-minute wait even before the park opened! A cast member advised us to come back around 4:00pm when the line should be shorter.

Not to be dismayed, we hurried over to Galaxy’s Edge and enjoyed walking right onto Millennium Falcon: Smuggler’s Run. It was our first time on the attraction, and we had a blast! I was the Engineer. After the ride, we stood just outside its exit with many other guests trying to get a boarding pass for Star Wars: Rise of the Resistance. The pass system opened at 10:00, and by 10:01, all passes were taken with many disappointed people. Luckily, we made boarding group 40. We then jumped in a short line to ride Smuggler’s Run a second time.

Around 10:30, we decided to venture out of Galaxy’s Edge and return for Rise of the Resistance later in the day. We checked the My Disney Experience app while heading to Toy Story Land and were shocked again to find that every open attraction in the park had over an hour wait! We couldn’t believe the long wait times at so early in the day. Rock 'n’ Roller Coaster was not yet open, and all of the shows were still closed.

We decided to stay in Galaxy’s Edge and peruse the stores, which had lines to get into them as well as only so many people are allowed in at once. After the stores, our son built a droid at the Droid Depot, which was a super fun experience. We also mobile ordered early at Ronto Roasters. This system worked well for us, and we did get a table to eat at.

After lunch, we saw in the app that Rock 'n’ Roller Coaster was open and at a 40-minute wait. We headed that way, but as soon as we got there were discouraged to see that the wait time had already jumped to over an hour, and the socially-distanced line worked its way all the way down Sunset Boulevard in the hot sun, which is not good for our fair-skinned, red-headed family. Instead of waiting in line, we sat down for ice cream sundaes and headed back to Galaxy’s Edge for our Rise of the Resistance and Savi’s Workshop reservations. The ride and lightsaber experience were just as good as promised. We will felt like we were in a Star Wars movie!

I am happy to report that most of the wait times did improve late afternoon. We walked onto Toy Story Mania at one point (an advertised 20-minute wait, which was really a five-minute wait), picked up Mickey pretzels, and then tried Mickey and Minnie’s Runaway Railway for the second time. Now, the line was down to 60 minutes. The line kept moving. We felt like we were in a game of musical chairs going from line marker to line marker, and we boarded the attraction within about 40 minutes. A cast member said it was the fastest he had seen the line move all day, which was good for us as again the majority of the line was in the hot sun with no shade. Mickey and Minnie’s Runaway Railway was a true treat to ride! It is definitely worth the wait.

Finally, we headed back to Rock 'n’ Roller Coaster and waited at almost park close for about thirty minutes. Because my husband and sons had lightsabers, my boys were able to ride the roller coaster twice with the child swap (or rather lightsaber swap) policy. They were thrilled!

While we were disappointed not to get the easy day that others have experienced during the pandemic, we were still blessed to be there and by the end of the day, were able to do most of what we wanted. It was our first time to ride Smuggler’s Run, Rise of the Resistance, and Mickey and Minnie’s Runaway Railway, and they are all three great attractions.

Anyone going to Hollywood Studios should expect a good time, but should also expect to wait in possibly longer than anticipated lines in the heat. Thankfully, the lines do seem to move faster than the projected times. Also, don’t expect the morning crowds to be light. Be sure to keep your masks on. I thought I was a good rule follower here, but even I got in trouble with a security guard once when my mask rested just above the tip of my nose and not all the way up the bridge of my nose. Wearing the mask during the hottest part of the day is hard, but an ice cream break helps. Our last piece of advice is to simply enjoy yourself. Hollywood Studios is still lots of fun, even in a pandemic!