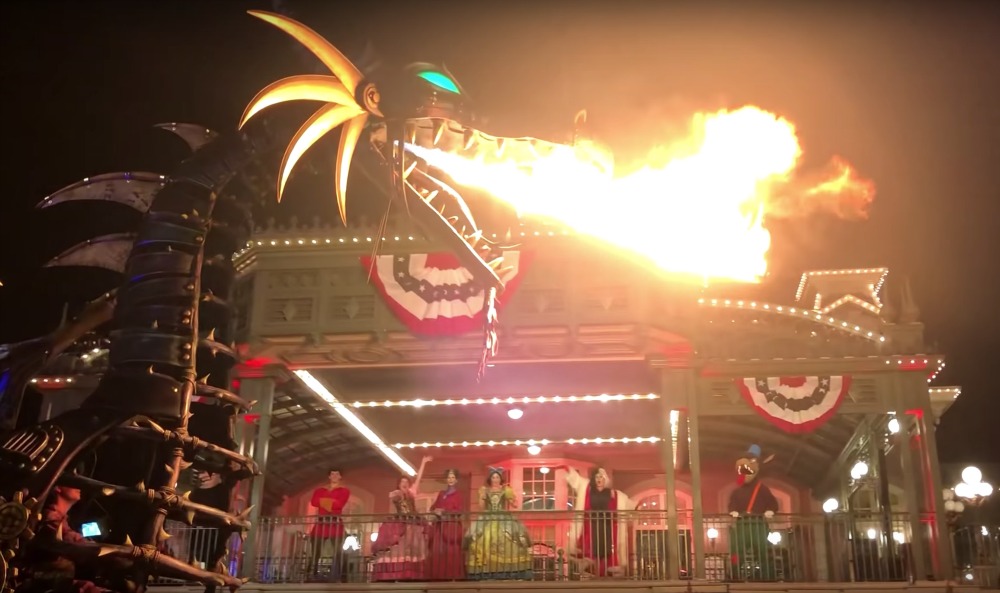 I attended the very first Disney Villains After Hours event that will be held throughout the summer at Magic Kingdom and want to share a bit about my experience along with some tips on how to make the most of the evening.

The event I attended took place on the first night, June 6, and it was real toasty out. In fact, toasty may not be the best way to describe the weather that night – the humidity was at 85% and Ryno described it best when he said it was like being wrapped in fly paper then wrapped again in your grandmother’s old (and wet) electric blanket. Yup, it was pretty bad, but at least there is no need to apply sunscreen like crazy once the sun goes down and with this event kicking off at 10:00 p.m., we were set there.

With your event ticket, you are allowed to enter as early as 7:00 p.m. without having a regular theme park ticket on top of it, so I recommend taking advantage of that by spending your day at your Resort pool. You’ll be able to ride far more attractions at this event than you can during the daytime as there are fewer guests throughout the park. The highest wait time I heard that night was Space Mountain at 35-minutes and that included some leftover day guests too. Seven Dwarfs Mine Train only had a 10-minute wait both times I checked and sometimes you can’t even book a FastPass+ for it 30-days in advance. An important note if you are already inside the Magic Kingdom after 7:00 p.m. and you’re attending this event, you’ll need to go back up to the front entrance to present your ticket and get your event wristband – don’t forget to grab a special event map!

If special event items like t-shirts and tumblers are your thing, you’ll find the full collection of Disney Villains After Hours merchandise at:

I recommend taking a peek and making your purchases early on as you never know when popular items will sell out.

You’ll notice that the park has a different villainous feel about it with different lighting than usual on Main Street, U.S.A. and there are also special projections on select objects around the park as well. After we finished dining at The Crystal Palace and walked toward the Castle Stage, there was a DJ playing pop music in the HUB in front of Cinderella Castle where guests were dancing and having a good time.

I headed over to Adventureland to see if I could get a quick ride on Pirates of the Caribbean, but there was around a 30-minute wait since day guests were still in the queue. While that doesn’t seem like a long time at all, this event only lasted for 3-hours and I knew the line would be shorter before too long, so I made my way over to Liberty Square to purchase one of the cool Headless Horseman straws and to grab my first complimentary bottle of water. Also included in your admission during event hours are select bottled beverages, ice cream novelties (including Mickey bars and sandwiches), and popcorn from snack carts located throughout the park. I drank 4 [bottles of water] that evening which would’ve cost me a bit more than $20, so it was nice to not have to pay for them.

Maleficent at Night was the first bit of entertainment I was looking forward to and she was due to creep along from Frontierland at 10:40, so I sat on the rocks across from The Hall of Presidents and waited for her. Once 10:40 came and went, we started to wonder if something had gone wrong and moved into Frontierland near Country Bear Jamboree and then we heard her making her way toward us. I have to tell you, seeing this creature at night with her glowing green eyes and fiery breath was about the coolest thing ever. The eerie “birds” in her entourage were especially creepy and came right up to us as we stood there watching. Take a peek at the video below to see her from different angles as she performed three times that evening.

The featured entertainment of the evening was Villains Unite the Night which also took place three times throughout the evening on the Castle Forecourt Stage. This brand new stage show was hosted by Hades and Megara from Hercules who were later joined by Jafar, The Queen, Dr. Facilier, and Maleficent. I thought the storyline was entertaining for the most part as it kept my attention for the whole 23-minutes. The projections on the Castle along with fire and poofs of steam and/or dry ice throughout the show were really cool too. There were a decent amount of fireworks that took place near the end of the show as well and I thought everything came together nicely and worked well. I will also share that I watched the entire show from the bridge in Liberty Square as I get very claustrophobic if I’m standing in front of the stage with the crowds. I’m only 5’ 2” and I can’t see above everyone anyways, so that worked out well for me and might do the same for you if you have the same tendency. You can watch the full show in the video below with a perfect front and center view as Craig does so well.

The Villains did not do any posing for photos or meet and greets at this event, which I was fine with. One of the biggest gripes I’ve read over the last few years about special events is that the lines to meet special characters take up all of your time. Well, this year, I heard some folks griping about the lack of meet and greets, but I think it’s far better than spending your whole evening in line.

We also tried some of the special treats and drinks that were available throughout the evening. I was a bit hesitant with these because although I have a serious sweet tooth, I didn’t really care for any of the special items at last year’s Mickey’s Not-So-Scary Halloween Party. I have to tell you, the special items at this event were pretty awesome. I tasted the Dr. Facilier’s Tarot Card Tart, the Headless Horseman “Browkie”, and A Drink from the Other Side which was a non-alcoholic Hurricane-like drink that was really refreshing on such a humid night. Both desserts I tried were just fantastic in my opinion, and you can watch what some of the others thought of theirs in the video toward the top of this post.

Select Disney Villains were standing at the top of the Train Station having some entertaining banter as they bid departing guests farewell. I recommend staying for a few minutes to watch and listen as these guys were pretty funny! Watch the video below to see our experience.

Now, it could be that I haven’t attended enough after-hours events to know this or maybe it will be as much of a surprise to some of you as it was to me. When I left the park, I was expecting to take the Resort monorail back over to the Grand Floridian where I was staying that night, but alas, when I went to head in that direction, I was told by a security Cast Member that buses and ferries were the only transportation options available. The buses felt like they were miles away and I was not happy because when you are staying along the monorail line, you expect to be able to take a monorail or a boat back to your resort even after an event. While I waited for the others to come out of the park, I chatted with some of the folks who were directing guests to their appropriate bus stops as they had all been changed up to make up for the monorail and resort boats not running and I was not the only one who wasn’t happy, but thank goodness, our bus stop was 10 which, for those who don’t know, is the first one you come to.

We finally boarded the bus at around two-ish in the morning and much to our surprise, we stopped at the Contemporary, the Transportation and Ticket Center, and the Polynesian before finally arriving at the Grand Floridian at 2:35 a.m. I got to my room pretty quickly and once I showered, I hopped into bed by 3. Here’s the thing, though I was wide awake after all of that bus riding and stopping with lights turning off and on that I couldn’t fall asleep. The last time I saw was 4:03 and this girl is a bit too, let’s say mature, to pull an almost all-nighter over here, okay? I did manage to get about four hours worth of sleep, but, it was a rough Friday.