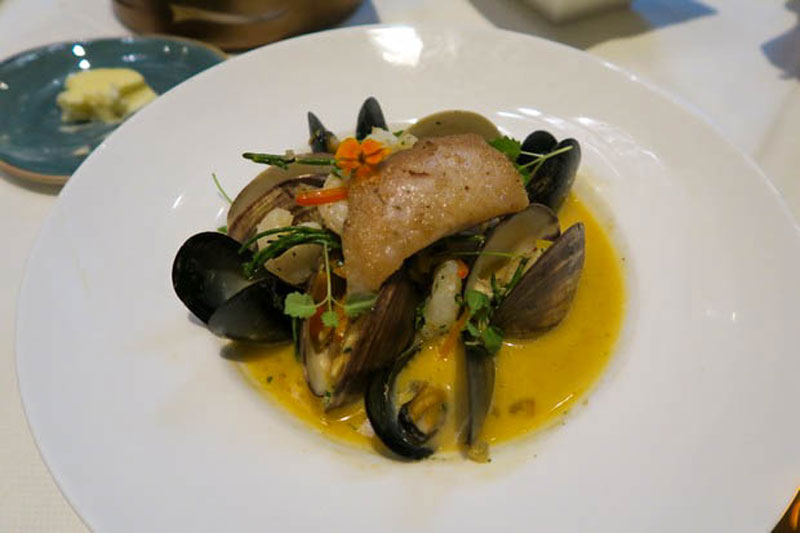 Having grown up on the north shore of Massachusetts, the thought of searching for decent seafood in Central Florida seems like a risk with potentially detrimental results.

I knew how to crack open a lobster at age three, my uncle was often bringing over fresh haddock he caught early that morning on his boat, and I clutch my pearls at the idea of someone eating a Filet-o-Fish. In other words, I’m a seafood snob. It’s in my blood.

Even though I have the freshest fish at home, that doesn’t mean my crustacean cravings take a break when I’m on vacation. I’ve eaten seafood both delectable and disgusting at Walt Disney World, here’s where you should and should not have yours. I’m always going to maintain the East Coast has the best fish, but a little inspiration from out west certainly works at this spot at the top of the Contemporary Resort. My initial visit was mainly for the views of Magic Kingdom for the nighttime fireworks display, but I returned several times after solely for the food. Offering arguably the best sushi on property, there’s also a selection of sea-centric entrees with Napa-worthy wines to pair. My go-to is the halibut — consistently cooked perfectly, with tasty seasonings and tender vegetable accoutrements that don’t distract from the fresh taste.

It amazes me that mere floors below the scrumptious selections at California Grill you will find such subpar dishes at this quick service in the Contemporary’s mezzanine. I’m not one to waste food, but I couldn’t stomach the sustainable fish sandwich (mahi-mahi on my visit) after a single bite, so to the trash nine-tenths of it went. Unless you’re extraordinarily distracted by the monorails zooming overhead, the funky seafood at this spot will have you heaving.

The only thing that got me to consider eating at this seafood buffet at the Beach Club Resort was being six weeks into my college program and desperately missing steamed clams. I went in with low expectations because buffet fish isn’t always good news, but I was surprised by the quality of the offerings. Those clams, in addition to crab legs, baked salmon, calamari, and unlimited non-seafood options, were well worth the $50 bill. Not as good as New England, but a solid spot that’s surprisingly underrated. FISHY – Be Our Guest Restaurant

I didn’t realize when the song said “try the grey stuff” it was referring to the salmon. As you might assume, it was not delicious. As much as I love the theming at this uber-popular Magic Kingdom dining destination, the seafood I’ve tried over several visits has left me filling up on dinner rolls and desserts instead. The salmon, as previously mentioned, had a fishy odor (common misconception: this is not a normal attribute of fresh fish), the sauteed shrimp and scallops were a creamy mess, and the Marseilles-style mussels tasted average at best.

I’m fond of fried seafood shops back home, but it’s fair to say the Brits have a monopoly on fish and chips. Like much of the World Showcase, Disney does this country proud with a pavilion offering both a table and counter service spot to pick up a serving of the beer-battered beauties, served with crispy fries and house-made tartar sauce.

If it wasn’t bad enough that you’re watching live fish swim about while you eat the fish on your plate, the food here isn’t even worth the experience. Though considered by many to be a must-do thanks to its location in Epcot’s The Seas with Nemo and Friends, this place should be avoided at all costs. If you can even find the entrance, you’ll have the displeasure to dine on corny crab cakes, flavorless lobster bisque, and slimy mahi-mahi. You’re better off at Electric Umbrella.

With the Boardwalk being one of my favorite resorts at Walt Disney World, I was devastated when it was announced the Flying Fish would be undergoing a renovation. I’m still not a huge fan of the new decor, but the menu has improved more than I could have hoped for. The masago-crusted grouper cheeks is an essential appetizer, while you really can’t go wrong with any of the near-perfect entrees that are ever-changing with what’s freshest in each season. My favorite so far has been the swordfish, but the scallops were some of the best I’ve ever tasted. Chef Tim Majoras, I salute you.

One of the worst meals I’ve had on Disney property, which I paid over $40 for, was the seafood cioppino at this restaurant. With its abysmal shellfish selection and murky flavor, it’s no wonder it’s no longer on the menu. I would gladly stop back by for the smoked mushroom bisque and berry cobbler, but that particular fish dish has kept me far away. An aesthetically beautiful area of my favorite resort, the Wilderness Lodge, Artist Point desperately needs to fix the food coming out of their kitchen before anyone should consider making a reservation.

Though I think this lagoon-side restaurant at the Grand Floridian Resort and Spa is generally overpriced and lacks an atmosphere, the steamed Maine lobster here is actually very well done. I’ve ordered it on two separate occasions, years apart, and it was outstanding both times. It’s just about the same quality as what I would have at home in the middle of summer, but presented a bit more elegantly with corn souffle, malted popcorn sauce, and asparagus. At $72, it’s definitely a treat-yourself meal or something to consider if you’re using the Disney Dining Plan, but I think it’s tasty enough to warrant spending a few extra bucks on a special occasion. The blame really falls on me for taking a chance on a $15 lobster roll at the Magic Kingdom, but I still need to shout to the world how unbelievably bad this was. I’m not even sure this thing could be considered a lobster roll, as it mostly consisted of pink mayonnaise mixed with chopped tomatoes and celery. If there was any lobster in there, it was tiny crumbles from a can. I’d rather go hungry.