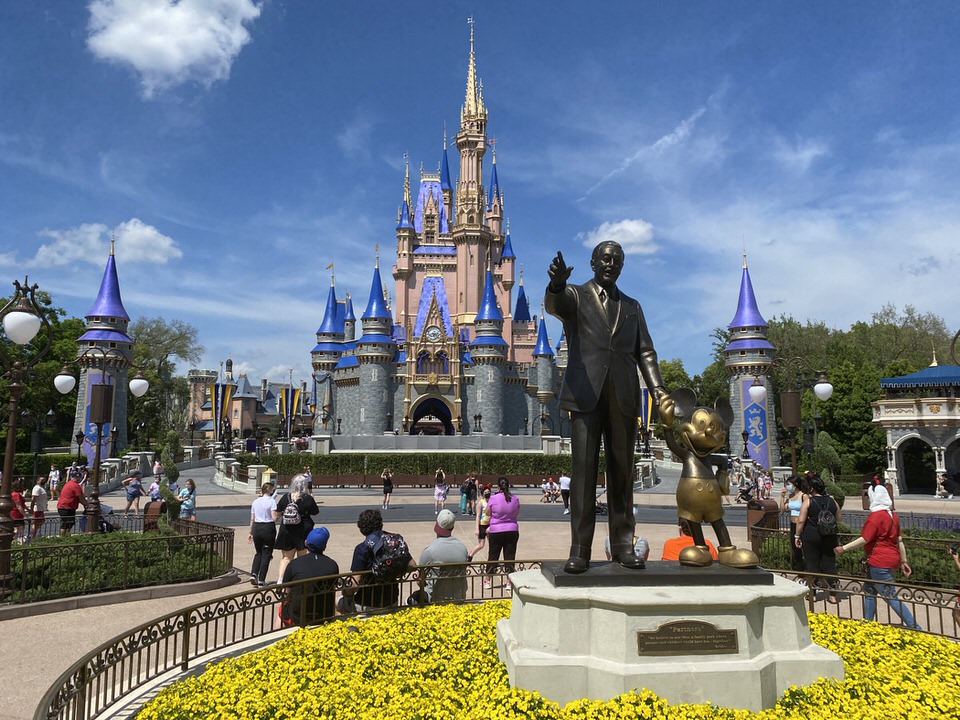 Want a taste of the magic of Walt Disney World? Here’s a look at my experience at Magic Kingdom on Thursday, March 25, 2021!

I was able to experience the new Facial Recognition Test for the first time when entering Magic Kingdom. When the test initially started, it was reported that the testing would only happen in the morning. I entered the park just after 2:00 pm and left around 5:00 pm and the optional test was still happening. Only one lane was handling the test, but the process was very simple and it will be interesting to see what comes of it.

I expected to see more crowds when I hit Main Street, U.S.A., but traffic was relatively light. Wait times ranged from 10 minutes all the way to 85 minutes, so a lot of people were in line for attractions, but not necessarily crowding the streets and pathways.

I started my day by popping into The Chapeau before it closes down for a refurbishment on March 29 along with the Main Street Confectionery.

Normally the Main Street Confectionery is too sweet for my tastes, but I still had to pop inside to see it one last time before they make changes to the classic location inside Magic Kingdom. Luckily, I was able to see some of the Easter goodies they have on display!

After leaving the Confectionery, I made my way to Cinderella Castle to get a closer look at the 50th Anniversary decorations added to the Castle so far!

My favorite detail is the little 50 on the buttons of some of the decorations.

I also took a moment to appreciate the Cinderella Castle stage construction.

I made my way through the castle to Prince Charming Regal Carrousel to get a closer look at the gold leaf added to the attraction to help it look better than ever for the big anniversary.

Here’s a look at one of the enhancements in progress compared to the finished version beside it. Quite the transformation.

I kept moving deeper into Fantasyland towards Bonjour! Village Gifts to see the art displayed inside now that the Main Street Cinema Art of Disney location is being repurposed due to the construction of the Main Street Confectionery and Chapeau.

I couldn’t not be in Magic Kingdom without peeking in on the Tron construction. It feels like they are making so much progress on the outdoor portion, but it’s still going to be forever until we actually have a chance to ride it.

I circled back out of Storybook Circus and continued moving through Fantasyland towards Liberty Square when I had the chance to see Peter Pan’s Flight beautiful temporary sign.

From a distance in Liberty Square, I spotted some Country Bears out and about in Frontierland, so I had to go say hi.

Finally, I moved into Adventureland, so I could see the current state of Swiss Family Treehouse during its refurbishment.

When leaving Adventureland, I was almost tempted to pick up a snack at the Spring Roll cart, but I resisted the temptation.

That was a small bit of my day at Magic Kingdom! Hope you enjoyed getting a chance to see some of what I experienced and stay tuned for more!