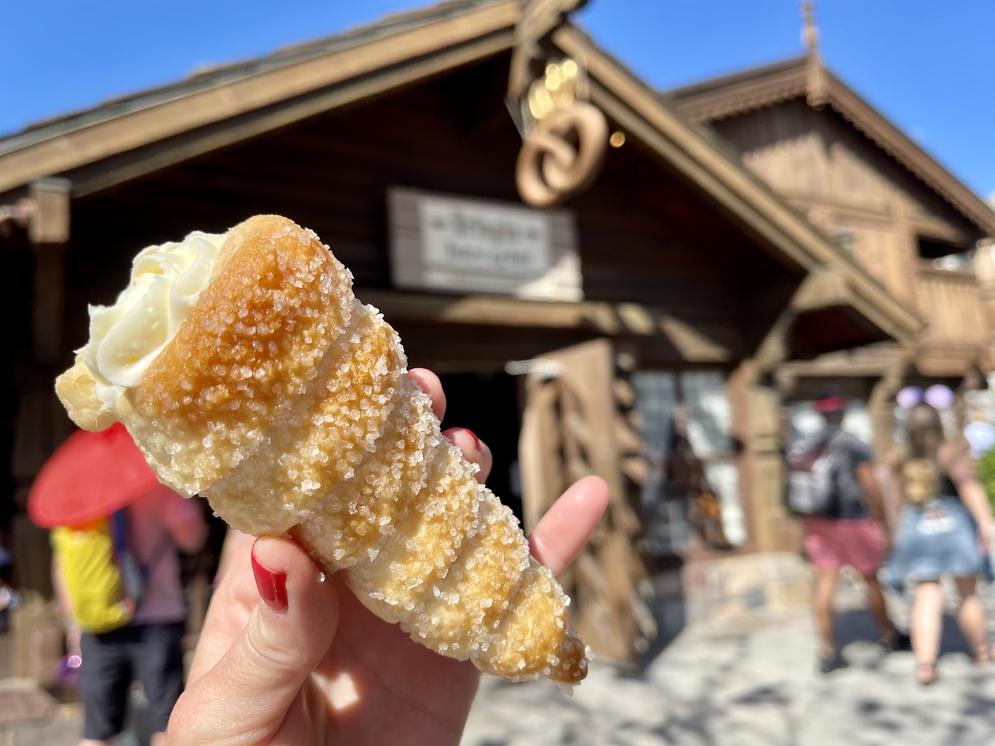 The latest chapter in my ongoing effort to try every snack that the Norway pavilion‘s Kringla Bakeri Og Kafe offers had me face-to-snack with an iconic treat: the Troll Horn.

For some Walt Disney World guests, the Troll Horn is the be-all and end-all, so I when I stepped into Kringla yesterday, I stepped in with rather high expectations. If you’ve missed my reviews of the Kringla snacks that I’ve tried so far, I’ll link to each here: School Bread, Verden’s Beste Kake, and Kransekake. Click on the name to head over to the review. I’ve had a blast getting to stop and try some of these popular EPCOT snacks. I know it’s a crying shame that I’m so late to the Norway pavilion snack game, but better late than never, right?

The Troll Horn is a crunchy, flaky dough horn that’s been filled with orange marmalade cream. The horn is baked until golden brown and comes covered in coarse sanding sugar. One Troll Horn will set you back $4.49.

One of the things that I wanted to investigate when ordering the Troll Horn is whether or not the cream used in the snack is different than what’s used in the School Bread and Verden’s Beste Kake. Just looking at the menu board assured me that it was, and one bite sold the difference between the two.

The cream that fills the Troll Horn is light and airy, and is lightly orange-flavored. If you’re worried that the overall orange flavor would be a bit much, don’t be. A light approach to the cream has been used, and it’s really nice.

The horn itself is light, flaky and crispy. The coarse sanding sugar provides added texture, and, of course, sweetness.

A warning about the last bite: my Troll Horn wasn’t completely filled with cream. If you’re looking forward to a cream-filled final bite, you may be disappointed. Hopefully it was just a fluke.

My overall thoughts about the Troll Horn was that it was tasty, however, for the price, it was small. When you compare the fact that you can get a School Bread for the same price or two Kransekake cookies for less, the Troll Horn gets bumped down my snack list. It took me about 6 bites to eat the Troll Horn, and I was surprised after it was gone at how small it really was.

On a side note, I’ve received the question from a reader as to whether or not the vanilla cream that’s used in the School Bread is the same as the custard that’s used in Verden’s Beste Kake (World’s Best Cake). I asked a Kringla cast member yesterday, and I was assured that the same custard is used in both. That custard is just so good.

Is the Troll Horn on your EPCOT must-eat list? Where does it rank when compared with the rest of Kringla’s offerings? Currently, the Kransekake (pictured above) tops my list. In fact, I bought two to go yesterday. Yummm.

What treat should I try next? Let me know in the comment section below!